Armenian-American Community to Provide 1.5 Million Meals to Americans In Need on April 24 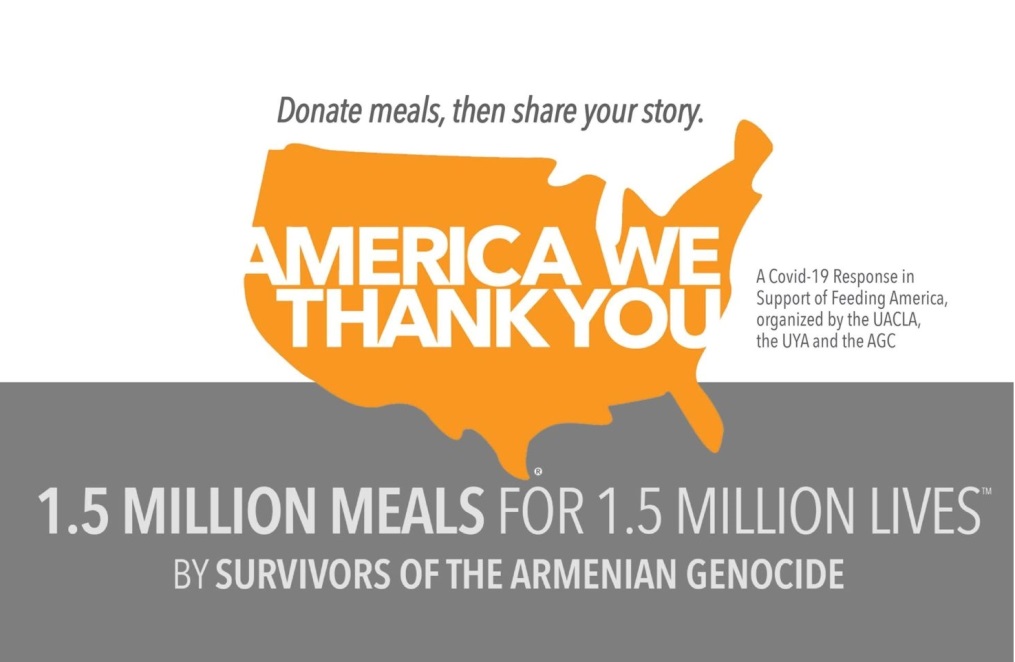 In lieu of the traditional requiem service at the Armenian Genocide Martyrs Monument in Montebello, the march in Little Armenia and the protest demonstration in front of the Los Angeles Turkish Consulate, the committees have been working together to create an all day commemoration which will be aired on local Armenian television channels as well as several hours of live streaming on social media all to take place on April 24, 2020, beginning at 10 a.m.

The all-day commemoration will feature addresses by several prominent government officials, community leaders and the clergy, as well as informative panel discussions concerning Genocide recognition, reparations and restitution for the crime of Genocide. In addition, viewers will have the opportunity to see documentaries regarding the Genocide and hear from our community, well-known personalities and cultural presentations to honor the victims of the first genocide of the 20th century.

The Armenian Genocide brought unspeakable horrors upon the Armenian population of the Ottoman Empire, including mass starvation. At the time, Americans organized the largest relief effort in United States history, through the Committee for Near East Relief to come to the aid of the Armenians devastated by the impact of the Genocide. Armenians have never forgotten the benevolence and great generosity of the American people. 105 years later, now Americans are facing a food insecurity crisis due to unprecedented levels of unemployment brought on by the Coronavirus pandemic.

To address this need, the UACLA/UYA/AGC have partnered with Feeding America, America’s largest food bank, to raise funds to provide 1,500,000 meals to America, in honor of our fallen martyrs and this great nation that came to our aid. Through this epic campaign, the entire Armenian community will be able to give thanks to America for its philanthropy at our greatest hour of need, and now, as Armenian-Americans we will do our part to help our communities and neighbors of all backgrounds and affiliations who face food shortages at this extraordinary time.