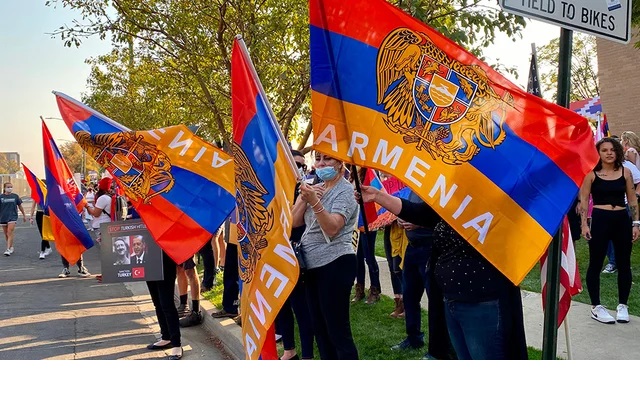 (The Hill)- The U.S. should halt military assistance to Azerbaijan and put more pressure on Turkey to stop its interference in the conflict with Armenia over the territory of Nagorno-Karabakh, Armenia’s ambassador to the U.S. said in an interview with The Hill.

Varuzhan Nersesyan, Yerevan’s representative in Washington, was speaking ahead of a summit expected to take place this month with Armenia’s Foreign Minister Zohrab Mnatsakanyan and Secretary of State Mike Pompeo.

The meeting, while occurring amid the annual strategic dialogue between the U.S. and Armenia, is taking on new urgency over efforts to secure a ceasefire and calm weeks of fierce fighting between Armenia and Azerbaijan that has killed dozens of civilians, injured hundreds more, and displaced tens of thousands.

Nersesyan said preparations are being made for the foreign minister’s visit ahead of an official announcement expected by Armenia’s Foreign Ministry and the State Department.

“We’re working on the preparation of the foreign minister’s visit to Washington,” Nersesyan said.

The outbreak of fighting last month, the fiercest in decades with heavy military firepower on both sides, has drawn renewed international attention to the more than 30-year stalemate of negotiations between Armenia and Azerbaijan over the breakaway territory of Nagorno-Karabakh, which falls within sovereign Azerbaijan but is controlled by ethnic-Armenians.

Armenians view the territory, which they call Artsakh, as part of their historic homeland while Azerbaijan says the area is under illegal military occupation.

The arrival of Armenia’s foreign minister in the U.S. could signal a greater push by the Trump administration to engage itself in mediation and peace efforts following the quick unraveling of an attempted ceasefire negotiated by Russia on Oct. 10.

The international community has largely regarded the U.S. as absent from efforts to calm tensions between both sides, with little public comment from President Trump on the weeks-long fighting.

Yet the U.S. — along with France and Russia — is a co-chair of the Minsk group, which is tasked with mediating a political settlement to the status of Nagorno-Karabakh and has urged both sides to abide by the ceasefire earlier mediated by Moscow as the group works to reach a negotiated political settlement.

The ambassador said he would welcome Trump taking a more active role as a mediator in the Southern Caucasus in implementing a ceasefire and called for the U.S. to exercise more pressure on Turkey, which has put its support behind Azerbaijan, to stay out of the conflict.

“Secretary Pompeo made a comment which we appreciate, where he says that Turkey reinforces Azerbaijan in this war,” said Nersesyan, referring to remarks by the secretary saying Ankara is “increasing the risk” of the fighting by providing firepower and resources to Baku.

“However at this stage, what is needed is a robust action, not only statements but concrete steps,” he added. “First of all, put pressure over Turkey to immediately stop its aggression against Nagorno-Karabakh.”

Bipartisan lawmakers in the House and Senate Democrats have condemned Azerbaijan and Turkey as instigating the outbreak of fighting that began on Sept. 27, and have called on the administration to halt military assistance to Baku and Ankara.

Yet the international community has withheld from assigning blame to either side and has reiterated calls for a de-escalation of tensions and a return to the negotiating table.

This includes support for a Russian-mediated humanitarian ceasefire that fell apart “as its ink was drying,” the International Crisis Group wrote in a statement about the ongoing fighting.

“Both sides have since struck towns and villages, with enormous damage to lives and livelihoods,” the group said.

At least 34 civilians have been killed in Nagorno-Karabakh, Reuters reported, citing the territory’s ombudsman, along with 633 casualties of the Artsakh Defense Forces. Azerbaijan, which doesn’t disclose its military deaths, has said at least 42 Azeri civilians were killed as a result of the fighting.

Accusations of atrocities on both sides have driven Armenia and Azerbaijan farther away from the negotiating table. Armenia views Azerbaijan’s aggression as an existential threat to a nation and a people who have suffered genocide and massacres perpetrated by Baku’s close ally Turkey.

Yet Azerbaijan has reiterated its calls for Armenia’s full military withdrawal and says it has the backing of a handful of  United Nations Security Council Resolutions from the 1990s, passed at the height of the conflict.

And the country’s President Ilham Aliyev has promised to take full control of the territory and claims to have “liberated from the occupiers” about 40 settlements, Reuters reported on Wednesday.

Nersesyan warned that Turkey’s involvement in the conflict could trigger a wider regional global confrontation. Russia, while maintaining relations with both Armenia and Azerbaijan, has a mutual defense pact with Yerevan. The conflict has added another layer of tension between Moscow and Ankara, which are on opposite sides of wars in Syria and Libya.

“What we are hoping and we are expecting is that the [U.S.] administration takes steps to stop Turkey,” Nersesyan said. “Otherwise this conflict can spiral out into a much larger and regional global confrontation. And that is not an exaggeration.”

Azerbaijan has taken issue with Russia’s alliance with Armenia and denounced Moscow’s military sales to Yerevan.

Azerbaijan denies that Turkey is militarily involved in the conflict and asserts that it only provides diplomatic and political support, Azerbaijan’s Ambassador to the U.S., Elin Suleymanov, told The Hill.

Noting an expected visit by the Armenian Foreign Minister, Suleymanov welcomed the role of the U.S. as a negotiator, but emphasized that the Trump administration “should maintain its neutrality and impartiality … to be an honest broker.”

“Azerbaijan welcomes every opportunity for substantive peace talks based on the basic principles and U.N. Security Council Resolutions,” he said. “If there is such an opportunity in Washington, D.C., of course, that is a very welcome move. I don’t have official confirmation yet from Azerbaijan as well, but I believe that such an initiative will be welcome.”