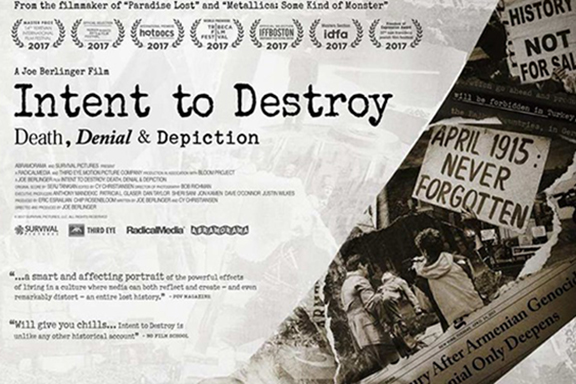 (Asbarez)- The Armenian Genocide-themed documentary “Intent to Destroy” directed by acclaimed director Joe Berlinger was nominated Thursday for a News and Documentary Emmy Award in the Outstanding Historical Documentary category.

“Joe Berlinger’s ‘Intent to Destroy’ is a tour-de-force documentary, powerfully presenting both the facts of the Armenian Genocide and the depths of Turkey’s ongoing international campaign of denial, artfully presented through the window of the making of blockbuster film, ‘The Promise,’”said Armenian National Committee of America Executive Director Aram Hamparian, who introduced the documentary at its Smithsonian Folklife Festival Washington debut in July, 2018.

“It’s well-deserving of today’s Emmy nod and a win in September – not just for its remarkable storytelling but also as a powerful blow against genocide denial,” added Hamparian.

Berlinger embeds with a historic feature film production on the set of Terry George’s “The Promise,” to take an unwavering look at the Armenian Genocide. Historians, scholars, and high-profile filmmakers come together in Berlinger’s cinematic exploration of the tangled web of responsibility that has driven a century of denial by the Turkish government and its strategic allies.

“Intent to Destory” is a timely reckoning with the large-scale suppression of a historical tragedy. Berlinger confronts the fraught task of shedding light on the Armenian Genocide – whose witnesses and descendants are still fighting to be officially acknowledged as such by the international community – how it was carried out during World War I as the reign of the Ottoman Empire drew to a close, and how it laid the groundwork for the genocides that followed.

In an interview with Asbarez Editor Ara Khachatourian in 2017, Berlinger said that the documentary, a companion film to “The Promise,” aimed to highlight for international audiences the effects of denying the truth about the horrific crime of genocide.

The 40th annual News & Documentary Emmy Awards will be presented on September 24 at a ceremony at Lincoln Center’s Alice Tully Hall in New York City.