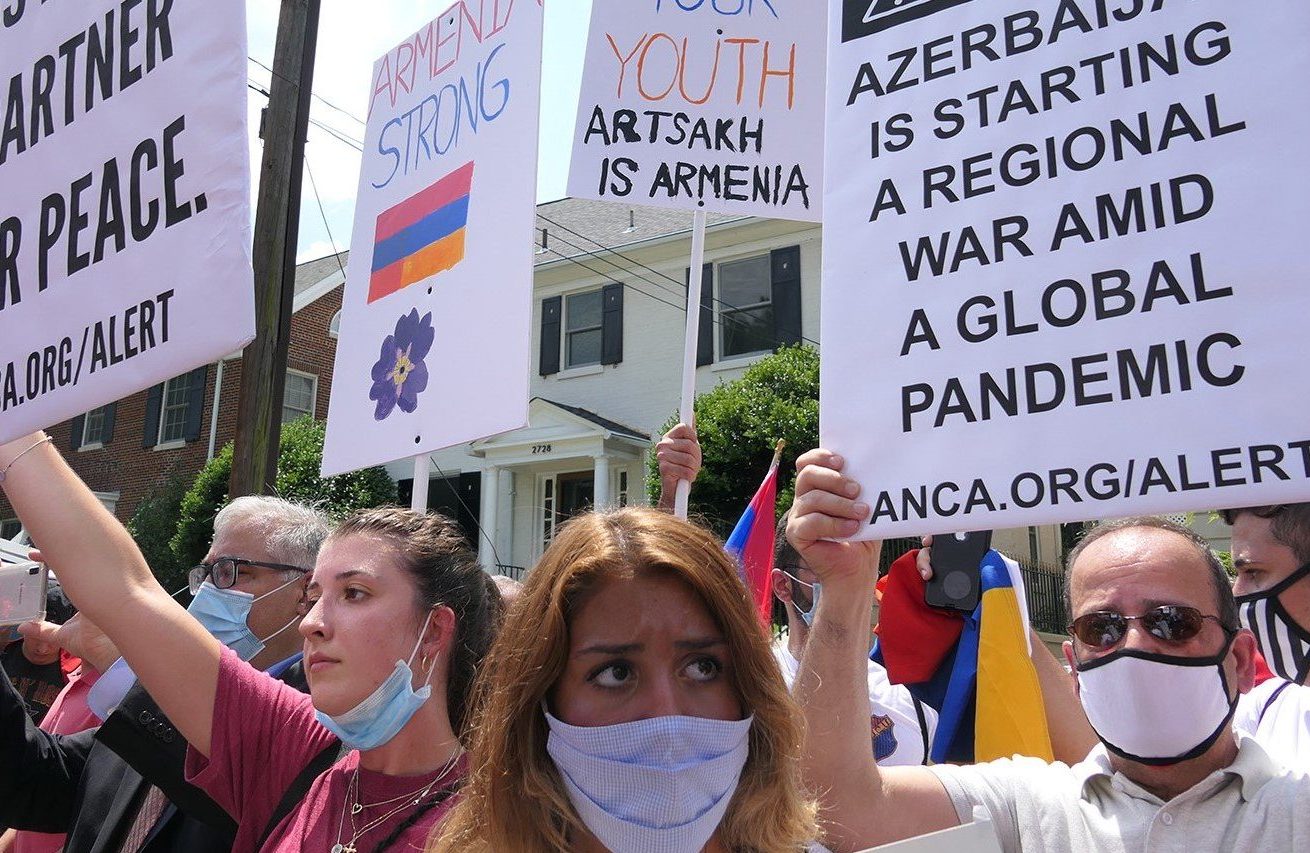 An Armenian Youth Federation (AYF) Washington DC Ani chapter-led community-wide protest today against Azerbaijan’s attack on Armenia was met by a hostile pro-Aliyev mob that, under the direction of Azerbaijani Ambassador Elin Suleymanov, unloaded a toxic barrage of hate-speech, and threats of violence.

“Armenians want peace, Azerbaijan wants war” was the Armenian American community’s message of the day, as they flashed peace signs and condemned the Azerbaijani targeting of civilians, which resulted in the bombing of a kindergarten in Tavush’s Aygepar village, the temporary closing of a PPE mask-making factory, and even Azerbaijani threats to shell Armenia’s Metsamor nuclear power plant.

Ambassador Suleymanov was videotaping and speaking on his phone as his followers participated in a bizarre mixture of yelling hateful slogans and joyful dancing in the face of President Aliyev ordered onslaught, which began on July 12th, that has left at least 15 Azerbaijani soldiers dead, with reports of more casualties.  At times, the protesters were inches apart, with police protecting Armenian Americans against advancing Azerbaijani counter-protesters.

Video from the protest was broadcast live on the AYF Eastern U.S., ANCA, and Voice of America Armenian Division Facebook pages and included on-sight coverage by H1 Television.

“We saw Aliyev export his aggression to the streets of Washington, DC today – under Ambassador Suleymanov’s direction; but we delivered our message of peace and support for the Armenian Homeland,” said AYF DC Chapter Chairman Alex Manoukian.  “It is long past time for the international community to stop the fake, even-handed peace rhetoric, and issue a clear condemnation of Azerbaijan’s attacks.  Anything less only emboldens Aliyev’s war-mongering.”

The Washington DC protest was part of a worldwide chain of Armenian Revolutionary Federation (ARF) Youth organized demonstrations in Australia, Canada, France, Netherlands, Sweden, United Kingdom, and in the Armenian homeland. In addition to toxic rhetoric, the Armenian protesters were attacked in London and targeted by rock throwers in the Netherlands. In the U.S., additional protests are planned in Los Angeles, with the AYF Western U.S.-led effort taking place at the Azerbaijani consulate on Tuesday, July 21st at 2:00 pm PDT.

The AYF has joined the Armenian National Committee of America (ANCA) in calling on Congress to support a series of amendments to restrict U.S. military aid to Azerbaijan and continue U.S. demining assistance to Artsakh (Nagorno Karabakh).

Pope Appeals For Peace Between Armenia and Azerbaijan