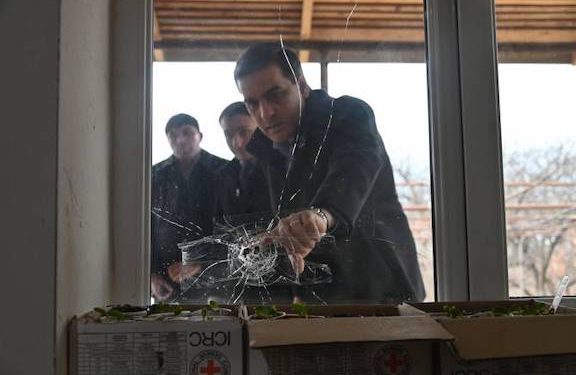 The Human Rights defenders of Armenia and Artsakh, after a two-day fact-finding mission in Artsakh, called for the immediate withdrawal of Azerbaijani forces from areas in the vicinity of civilian settlements and warned that residents of Artsakh, especially around the Aghavno village, face water insecurity and threats to water supplies.

As part of their fact finding mission, which concluded on Wednesday, Arman Tatoyan and Gegham Stepanyan, the rights defenders of Armenia and Artsakh respectively, visited the civilian settlements of Taghavard, Karmir Shuka, Aghavno, Khramot and other areas in the Republic of Artsakh.

Tatoyan and Stepanyan provided details on the recent Azerbaijani attacks on civilian targets that included residences, farms and farm workers, as well as and more important, water shortages that effect the residents of Artsakh and the border regions in Armenia.

In the Aghavno community, people are facing serious problems with their drinking and irrigation water supply. Nearly all residents told the rights defenders about witnessing Azerbaijani forces slaughtering cattle and dumping the remains into the water used by residents of the village.

This has caused massive contamination of the the water supply, with poisoning cases reported by residents—especially women, children and the elderly.

Several villages in the Gegharkunik Province of Armenia also face water deprivation due to Azerbaijani incursions. The water security in several communities of Syunik province is under real danger, the rights defenders said.

During several meetings and discussions, teachers and students told Tatoyan and Stepanyan that Azerbaijani forces targeted the school, observing that Azerbaijani soldiers have a direct vantage point on the Taghavard public school.

Residents told the rights defenders that in Artsakh’s Taghavard and Karmir Shuka Azerbaijani soldiers beam strobe lights from their positions or vehicles onto residences—including inside the homes—in order to terrorize the residents. This is frequently done especially at nights or evenings.

During their fact finding mission, Tatoyan and Stepanyan witnessed Azerbaijani terror tactics first-hand when on Tuesday at 3:30 p.m. local time, Azerbaijani Armed Forces fired targeted shots at farmers who working on fields in the Khramort village of the Askeran region, which resulted in a damage to a tractor. On Wednesday, between 10 and 11 a.m., when residents were working in the vineyards in the Khramort village, they were approached by Azerbaijani armed soldiers and were forced to leave the field. Most of the residents who were working were women, Tatoyan and Stapanyan said.

“Just few days ago, on February 11, the Azerbaijani Armed Forces opened fire in the direction of civilian residences. Walls and roofs of the houses were damaged. Women and children were inside the homes at the time of the shooting. A window was hit by bullets, and at that time a toddler was asleep in the room,” the rights defenders said in a statement.

The rights defenders said that impeding farmers from their daily works is depriving them of their right to work and earn a living for their families. These tactics, they said, aim to disillusion the farmers to leave their lands and abandon Artsakh.

“As long as the Azerbaijani authorities are engaged in this policy, the terroristic criminal actions committed by their armed forces will not stop. Therefore, the only way to protect the peaceful population is for these troops to not be stationed in the vicinity of Armenian villages and roads, in order for the peaceful residents to be able to exercise their rights,” Tatoyan and Stepanyan said in a joint statement.

“The Azerbaijani military servicemen are deployed directly in front of these residential houses, only a few hundred meters away, and people are under their full surveillance,” the rights defenders said, adding that the Azerbaijani troops are deployed on the lands owned by the residents—pastures and fields.

“It is obvious that the Azerbaijani authorities are engaged in a criminal policy of terrorizing peaceful residents and creating an atmosphere of despair, which is of coordinated and targeted nature.
In all places where Azerbaijani armed servicemen are deployed the security of people is disrupted, life is under real danger,” warned Tatoyan and Stepanyan.

The Azerbaijani servicemen who have appeared in the direct vicinity of villages in Armenia and Artsakh are doing everything to make the life of the peaceful population and ensure that life doesn’t resume after the war, the rights defender observed.

“They shoot at villages, obstruct farmers from doing agricultural work, steal domesticated animals. All facts prove that the criminal actions of Azerbaijani armed servicemen against the peaceful population in both Armenia and in Artsakh are the same in nature, with more aggressive manifestations in Artsakh,” they said.

“It is evident to us that the foundation of all this is the continuous policy of Armenophobia and propaganda of hate by the Azerbaijani authorities against Armenia and Artsakh,” warned the two human rights defenders.