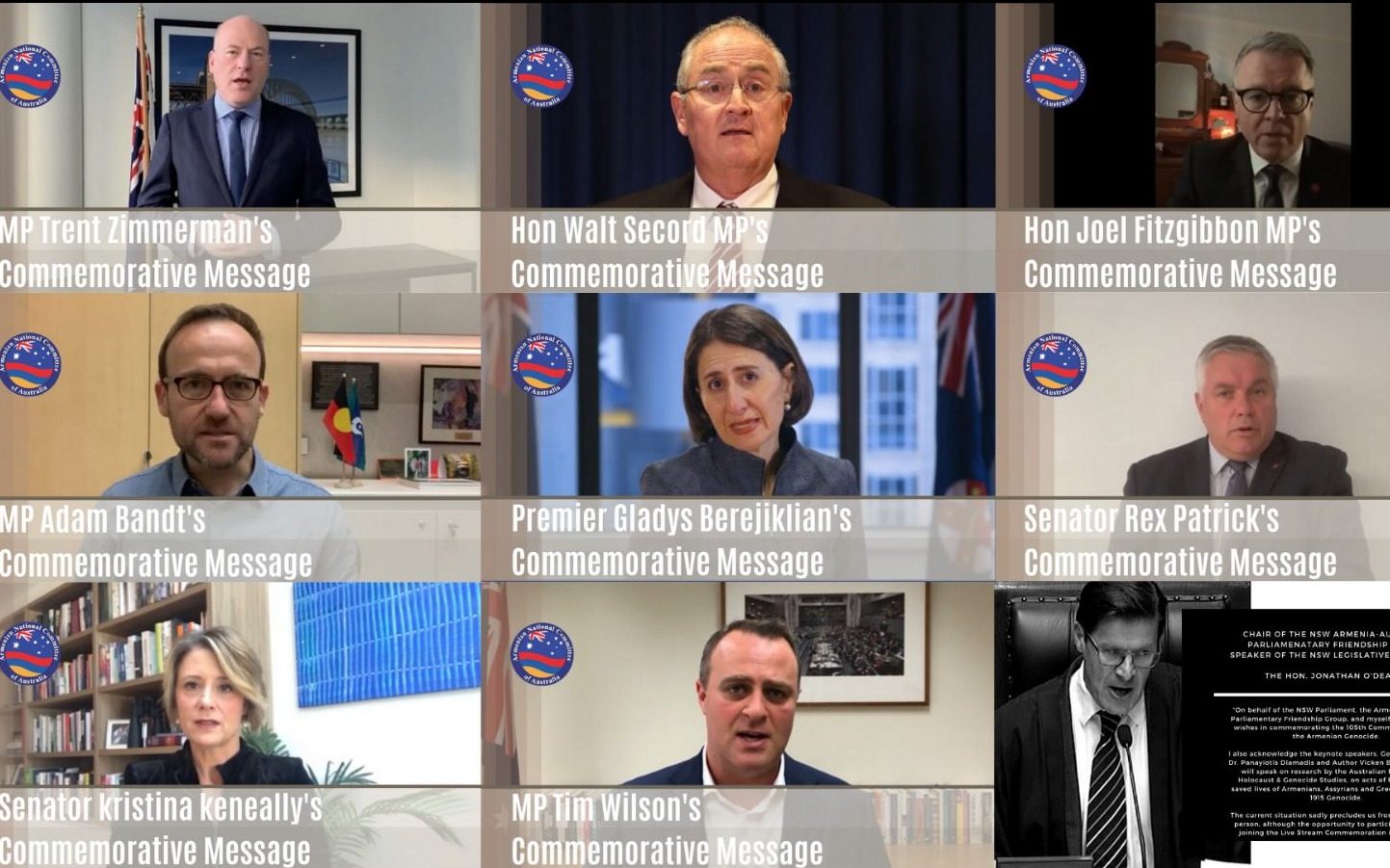 The livestream commemoration event had over 15,000 tune in during the first 12 hours from broadcast, where ANC-AU Executive Director Haig Kayserian called out the Australian Government.

“The Australian Government’s position on the Armenian Genocide is a kind of Houdini Act that attempts an array of verbal gymnastics and poorly-veiled illusion. All these euphemisms, all this effort to not upset a dictatorship posing as a friendly ally,” Kayserian said, before reading statistics that since the 2016 attempted coup, Turkey’s President Recep Tayyip Erdogan has jailed hundreds of thousands of journalists, academics and judges.

“The ‘truth’ that Australia is going with is that the Armenian experience at the hands of the Ottoman Empire was not a genocide. This is an active ignorance of the overwhelming facts,” Kayserian added.

“This is clearly offensive and unacceptable to us descendants of genocide survivors who proudly call Australia home.”

The broadcast featured evidence of ANC-AU’s claim that a growing number of Federal Australian politicians are actively distancing themselves from the official position, and calling on Australia to unequivocally recognise the Armenian, Assyrian and Greek Genocides.

“When the elected representatives in a democracy are increasingly declaring a position that differs to that of the Government, it is time that the Government reviews and changes their position. It is likely that it is outdated. It is probable that it is wrong. It is definitive that it is indefensible and therefore untenable,” said Kayserian.

“The memorial (Tsitsernakaberd) itself and the opportunity to lay a wreath there was a very poignant of the importance of all of the work that I and others have been doing to try and see the Australian Parliament recognise the Armenian Genocide, as it should,” he said.

Joel Fitzgibbon, who is the Federal Member for Hunter and Shadow Minister for Agriculture, said in his message: “We are grateful that more and more legislatures around the world are by resolution now recognising it as (a Genocide). Trent Zimmerman and I, and our other parliamentary colleagues, will continue to work towards the Australian Parliament doing the same thing because it’s the right thing to do.”

Federal Member for Goldstein and Chair of the Australian Parliament’s House Committee on Economics, Tim Wilson, who is the only Federal Australian parliamentarian of Armenian heritage, joined the chorus.

“Sadly, there still hasn’t been a full acknowledgement of the Armenian Genocide by the global community,” Wilson said.

“It’s an issue that I and colleagues continue to raise in the national Parliament because we understand the importance of acknowledging the history to make sure that, as a global community and as Armenian people, we can heal from the past trauma.”

“It’s a part of addressing attention to injustices and making sure that as a global community, we acknowledge the wrongs of the past so that we can move forward and say with confidence, with clarity, with certainty and with action, never again,” Wilson added. Shadow Minister for Home Affairs, Senator Kristina Keneally added: “Acknowledging the truth of history is the first step to righting wrongs and redressing harm and suffering. Increasingly, the nations of the world are recognising the truth of the Armenian Genocide and I look forward in anticipation to the day that Australia joins that list.”

The Leader of The Australian Greens and Member for Melbourne, Adam Bandt was powerful as the leader of a party who has a position calling for national recognition of the Armenian Genocide.

“The Australian Greens have long held the position that the Australian government must recognise the Armenian Genocide,” Bandt said.

He said: “Unfortunately, historically genocide has gone unpunished. Just before the invasion of Poland in 1939, Hitler asked ‘Who after all speaks today of the annihilation of the Armenians?’. To this we can all answer, we speak of it more than a hundred years later and we will continue to speak of it.”
In addition, New South Wales Premier and grandchild of Armenian Genocide survivors, Gladys Berejiklian delivered a solemn message of remembrance.

“We will never forget because to forget those events, to forget that genocide, allows denialist states to keep doing those horrific acts time and time again,” Berejiklian said.

“On behalf of the NSW Parliament, the Armenia-Australia Parliamentary Friendship Group, and myself, I extend best wishes in commemorating the 105th Commemoration of the Armenian Genocide,” he said.

Calouste Gulbenkian Foundation is Launching the BE HEARD Prize Initiative