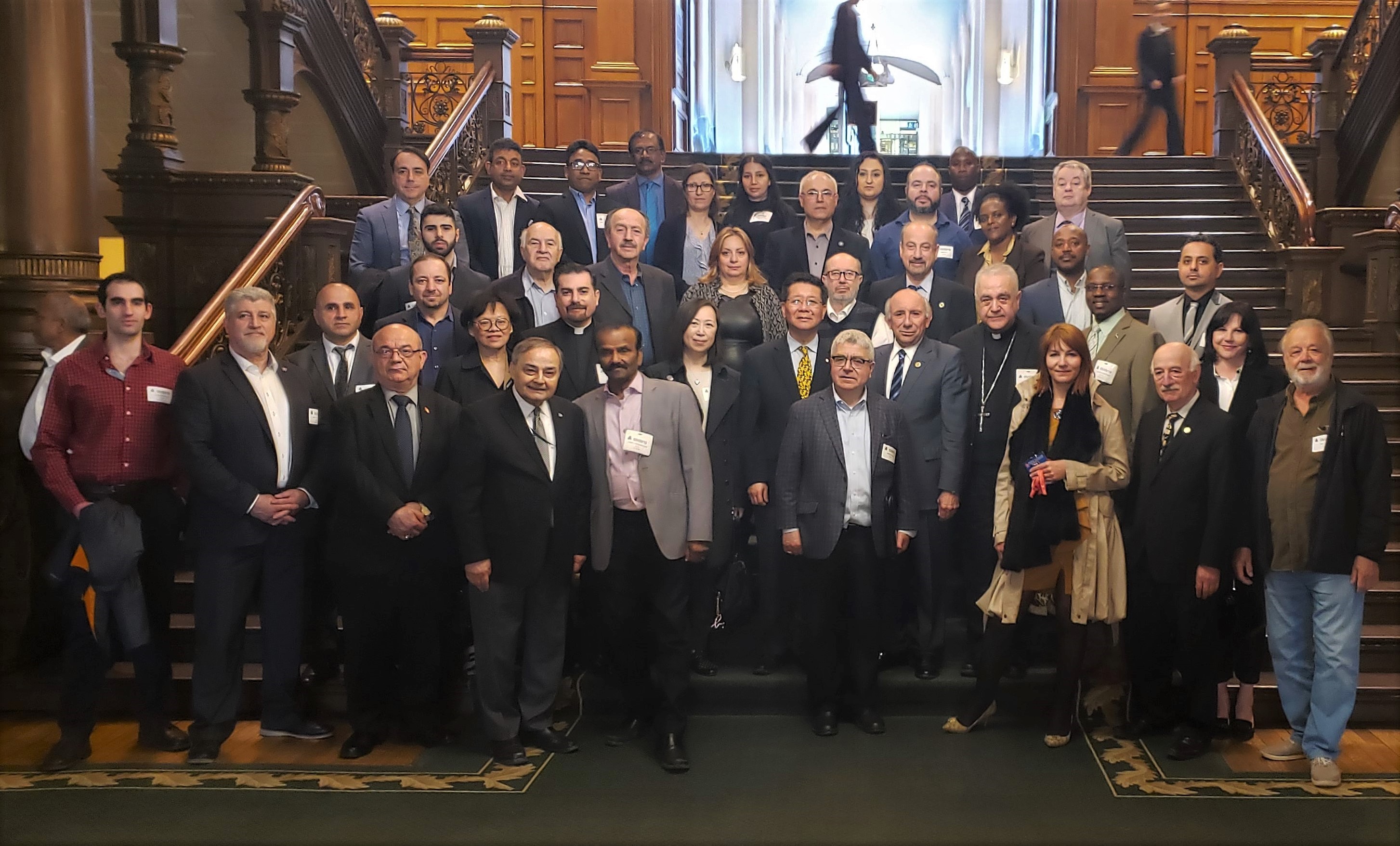 MPP Aris Babikian with representatives of ethnic and religious communities and organizations who attended the debate on May 9 at the Ontario Legislature, Toronto.

Toronto- On May 9, MPP Aris Babikian led the second reading debate on Bill 97 which proposes to proclaim the month of April as Genocide Awareness, Commemoration, Prevention and Education Month.

Representatives of 40 civil-society organizations from 11 different ethnic and religious communities attended the debate to show their support for the Bill.

Bill 97, when passed by the Ontario Legislative Assembly, will recognize the following genocides, in addition to the genocides already recognized by the Provincial Parliament (namely the Holocaust and the Armenian, Rwandan, Ukrainian, Cambodian and Sikh genocides): The Pontian Greeks; Assyrians; Chaldeans; Syriacs; Nanjing Chinese; Yazidis in Iraq under ISIS; Christian populations of Iraq and Syria under ISIS; Tamil-speaking people in Sri Lanka; and Rohingya Muslims.

In his presentation Babikian mentioned the many crimes against humanity, and the importance of acknowledging them to prevent future crimes. He also talked about how Canada was one of the leading countries to launch relief efforts to help the refugees and the orphans of the Greek and Armenian genocides after World War I.

If the bill passes, teachers across Ontario will have added impetus to educate students about the horrors of genocide and wounds that come with the trauma of crimes against humanity.

MPPs Jill Andrew, Vincent Ke, Logan Kanapathi, Sheref Sabawy spoke about the importance of acknowledging and marking these crimes and how passing of the proposed bill can increase the awareness of genocides being committed around the world.

MPPs Sol Mamakwa, Gurratan Singh and Rima Berns-McGown asked the bill to be more inclusive of all the atrocities and human rights violations committed in Canada and abroad.

“I am pleased that this important bill has passed second reading with the support of all political parties in the Legislative Assembly,” said MPP Babikian. “I look forward to continuing the work on this very significant human rights issue to bring healing and closure to the victims,” he added.

Babikian also extended his appreciation to individuals and organizations that worked tirelessly to galvanize support for the bill by meeting their MPPs, writing letters, and signing petitions.

The bill now will be referred to the Justice Committee of the Legislative Assembly of Ontario, for further examination.

Ontario is a place that embraces diversity.

Genocide has affected the lives of many Ontario families and communities. Ontario is home to many religious and ethnic communities who have been persecuted in the past.

In addition to the genocides that either the Legislative Assembly of Ontario or the Parliament of Canada, or both, have recognized, Ontario recognizes the genocides committed against the following communities:

The month of April has a connection with a number of genocides. The Holocaust against the Jewish people and the Armenian and Rwandan Genocides began in the month of April. On April 24, 2015, the House of Commons of Canada passed a motion designating April as Genocide Remembrance, Condemnation and Prevention Month.

Therefore, Her Majesty, by and with the advice and consent of the Legislative Assembly of the Province of Ontario, enacts as follows:

1 The month of April in each year is proclaimed as Genocide Awareness, Commemoration, Prevention and Education Month.

2 This Act comes into force on the day it receives Royal Assent.

3 The short title of this Act is the Genocide Awareness, Commemoration, Prevention and Education Month Act, 2019.

EXPLANATORY NOTE: The Bill proclaims the month of April in each year as Genocide Awareness, Commemoration, Prevention and Education Month.