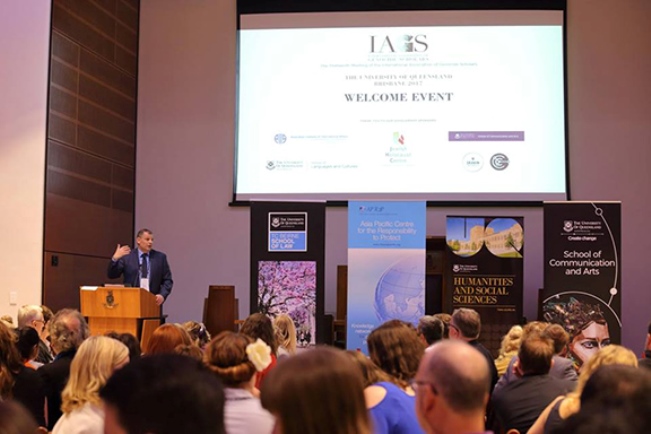 BRISBANE, Australia—Professor Henry C. Theriault was elected President of the International Association of Genocide Scholars (IAGS) on Tuesday during the organization’s annual conference becoming the first Armenian to assume the position.

The conference also elected the Dr. Suren Manukyan, Deputy Director of the Armenian Genocide Museum & Institute in Yerevan as a member of IAGS’s Advisory Board.

In his nomination statement, Theriault warned of the threats facing human rights advances due to the dire political climate in the United States and Europe.

“Genocide studies has been at the forefront of recent human rights advances. Dire political climates in the US, Europe, and other areas threaten this progress. Racism, xenophobia, misogyny, etc. pervade public discourse and drive repressive legal and political regressions the world over. Genocide’s prevalence even threatens increase,” said Theriault.

“Against this, a vibrant IAGS is essential. Demagogues attack the sensibilities genocide studies engenders. Our work is a crucial challenge to their propaganda. IAGS must strive against this marginalization while innovatively expanding the field, especially creating space for emerging scholars particularly vulnerable to this backlash,” he added.

Theriault was most recently Professor in and Chair of the Philosophy Department at Worcester State University, where he has taught since 1998 focusing on courses on genocide, mass violence against women, and related topics. He has published and lectured widely on his research which focuses on the relationship of genocide and sexual violence, victim- perpetrator relations in the long-term aftermath of genocide, genocide prevention, genocide denial, and reparations. From 1999 to 2007, he coordinated the University’s Center for the Study of Human Rights.

He earned his B.A. in English from Princeton University and his Ph.D. in Philosophy from the University of Massachusetts, with specializations in social and political as well as continental philosophy.

He is co-editor of Genocide Studies International, a peer-reviewed journal from the University of Toronto Press and the Zoryan Institutes’ International Institute for Genocide and Human Rights Studies and of Transaction Publishers’ Genocide: A Critical Bibliographic Review book series.

In 2013, Theriault served as a panelist at the Armenian National Committee of America-Western Region’s Grassroots Conference, speaking on challenges facing the Western Armenia, especially with regards to Kurdish and Armenian relations.