Himnadram Toronto Raises over a Half Million USDollars at Annual Fundraiser 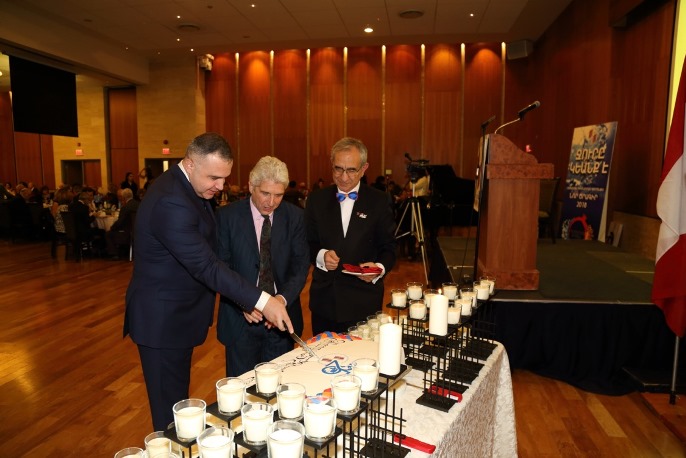 Toronto, ON – $670,000 ($530,000 USD) was raised at the annual Hayastan Foundation Toronto banquet held at the Armenian Community Centre on November 12, as well as by the early major donations throughout the year. Over 400 supporters, including a large number of university students, attended the banquet. The annual event was dedicated to Canada 150 and the 25th Anniversary of the Hayastan Foundation Toronto.

The national anthems of Canada, Armenia and Artsakh were performed by soprano Armenia Sarkissian, accompanied by Talin Artinian-Kelebozian on the piano.  M.C. Tenny Nigoghossian’s opening remarks emphasizing the 150th anniversary of Canada and the 25 years of Hayastan Foundation, were followed by an address by Levon Martirosyan, Armenia’s ambassador to Canada, who stressed the key role the Foundation has played in Armenia and Artsakh since the independence of both republics. The cultural program started with the Hamazkayin Erebuni Dance Ensemble, followed by two songs by soprano Lynn Anoush Isnar, and finally Armenia Sarkissian, singing one of her own compositions.

Migirdic Migirdicyan, Chair of the local chapter of the Foundation, gave a detailed report of the organization’s twelve most recent projects, which had made the Toronto chapter’s past year highly productive, bringing the total to 72 projects since inception. These included a school for the Ughdasar village; an ambulance and water for Dadivank; four newly built houses for the Chartar, Ughdasor, Gusabat, and Lousatsor villages, three sanitary stations for Shushi, Amaras and Dadivank, the ‘Life Centre’ for the Khntsoristan village and the construction of the outside sports fields for the newly renovated school at Nalbantyan village. The latter followed the total renovation and partial reconstruction of the same school by the benefactors Berjouhi and Armen Nalbandian in 2016.

After the review of the current projects for 2018, under the theme “Water is Life”, village irrigation projects were presented. Each project unit consists of a deep water drilling, construction of an electric pumping station and distribution pipes, bringing much needed water to the arable lands adjacent to the houses of families with multiple children, who would be able to develop agriculture in a more effective way.

Keynote speaker and guest of honor, music director of the Toronto Symphony Orchestra and the Royal Scottish National Orchestra, internationally renowned maestro Peter Oundjian, delivered an eloquent speech. He described how his violin teachers starting with Manoug Parikian in London, Ivan Galamian in New York and later in a master class Herbet von Karajan inspired his career. He also talked about “giving back to the society” and urged the audience to support Hayastan Foundation.

The fundraising drive of the evening was kicked off by Houri Najarian, Vice-chair of the Foundation.

Thanks to a generous donation by Sarkis Yacoubian, a longtime supporter of the Foundation, students from local universities were attending the event for free and two of them earned the right to travel to Armenia after an essay contest with the title “Why I should go to Armenia and how can I contribute to it?”. The initiative attracted the cheers of an enthusiastic audience.

One of the highlights of the evening was the auctioning off of an autographed soccer jersey by the star player of Manchester United, Henryk Mkhitaryan. The highest bidder and the winner of the shirt was Richard Sevazlian, the Honourary Council of Armenia in Toronto, with a top bid of $25,000. Closing the program, Migirdicyan thanked all the donors and told the audience that thanks to the money raised during this banquet and throughout the year, Toronto will bring irrigation water to at least four villages, build two more houses and two more sanitary stations in Artsakh, and also provide housing to two families in Gyumri.

The new projects is expected to complete in 2018.

Canadian Jewish, Ukrainian, Armenian, Greek and Rwandan Communities Unite in Sharing Past and Building Future Together