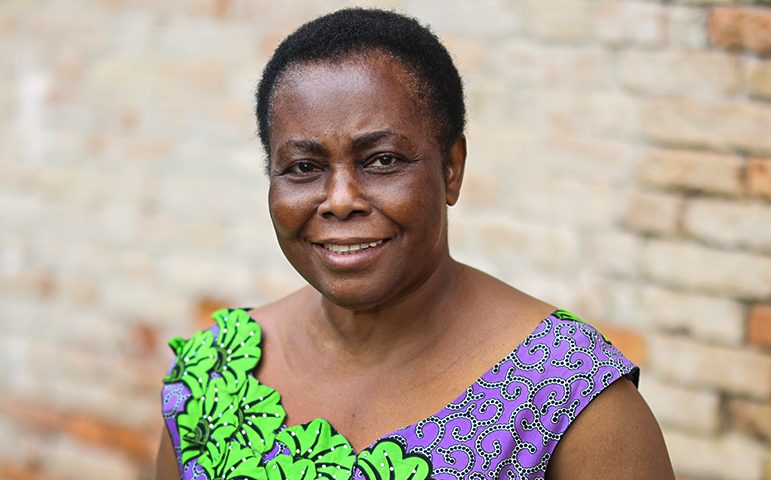 The sixth annual Aurora Prize for Awakening Humanity was awarded today to Julienne Lusenge, a human rights defender, co-founder of Women’s Solidarity for Inclusive Peace and Development (SOFEPADI) and Fund for Congolese Women (FFC), who has been helping the victims of wartime sexual violence for years. Her boundless courage and tireless activism have shone a light on the desperate plight of thousands of Congolese women subjected to horrific sexual abuse amidst the civil war in the country, exposing the perpetrators and bringing them to justice. She was named the 2021 Aurora Prize Laureate at the Ceremony titled “Reviving Together” that was held in Venice, Italy. The Aurora Prize is granted by the Aurora Humanitarian Initiative on behalf of the survivors of the Armenian Genocide and in gratitude to their saviors.

“Julienne Lusenge’s exceptional achievements remind us of the impact one person can have, even when encountering the seemingly insurmountable pressure and risks. By recognizing her courage, commitment and selflessness, we are hopeful that she can also inspire each one of us to think about what we can do to stand up on behalf of those whose rights are abused and who are in dire need of our solidarity and support,” noted Lord Ara Darzi, Chair of Aurora Prize Selection Committee and Co-Director of the Institute of Global Health Innovation at Imperial College London.

“The COVID-19 pandemic has powerfully demonstrated that what happens in one corner of the world, however remote, affects all of us. We cannot remain indifferent to the suffering of others; we cannot afford to not care. Today, more than ever, we need to let the universal values of gratitude and humanity unite and guide us, as they guide 2021 Aurora Prize Laureate Julienne Lusenge,” said Noubar Afeyan, Co-Founder of the Aurora Humanitarian Initiative and Founder and CEO of Flagship Pioneering.

As the 2021 Aurora Prize Laureate, Julienne Lusenge will receive a $1,000,000 grant and a chance to continue the cycle of giving by supporting organizations that help people in need. This year, considering the acute needs of the people of Artsakh (Nagorno-Karabakh) affected by the 2020 war, Aurora will recommend her to direct 25% of the award funds to addressing urgent humanitarian issues in Artsakh. The Aurora Co-Founders are committed to matching this contribution to bring the total amount to $500,000. Besides this, Ms. Lusenge has nominated three organizations that support grassroots women’s organizations, empower survivors of gender-based violence and reintegrate internally displaced persons:

“The outstanding work carried out by Julienne Lusengeand her organizations that help women, as well asher courage and perseverance in going against powerful local forces to protect them, is an example of empathy, kindness anddedication. One of the most important goals of Aurora is empowering such heroes, and we are grateful for the opportunity to do just that,” said Hina Jilani, Aurora Prize Selection Committee member and Former United Nations Special Representative of the Secretary-General on Human Rights Defenders.

Part of SOFEPADI is a hospital and mobile clinics providing holistic medical and psychological care to survivors of sexual violence. In 2010–2020, the medical center received and treated 6,284 people, including 567 internally displaced people. SOFEPADI also encourages socio-economic reintegration with income-generating activities, apprenticeships, and school reintegration, and provides the survivors with legal advice and representation in court.

“At the heart of Aurora is a global movement based on the idea of Gratitude in Action. With hundreds of people that have already joined us, the impact Aurora has managed to achieve is literally changing the world. It is an honor to be able to recognize such heroes as Julienne Lusenge and to be able to highlight and promote their work with the help of our donors and supporters from across the globe,” noted Ruben Vardanyan, Co-Founder of the Aurora Humanitarian Initiative and Noôdome.

Since its launch, the Aurora Prize has changed the lives of almost 1,000,000 people affected by war, conflict, persecution, and other humanitarian issues. This action-based philanthropy, focused on tangible results, is possible thanks to the supporters whose contribution allows the Prize to continue empowering modern-day heroes. Aurora appreciates any commitment to endorse its mission and encourages everyone to join the Initiative and support it.

In the meantime, nominations are still open for the 2022 Aurora Prize for Awakening Humanity. Until October 31, 2021, any person can submit a nomination for candidates they believe have overcome great personal challenges to help others.