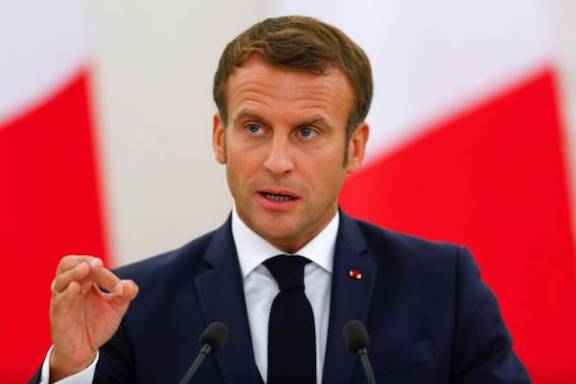 (Asbarez)- Saying France “stands by Armenia during this difficult time,” French President Emmanuel Macron on Tuesday called for a “lasting political solution” to the Karabakh conflict after Armenia and Azerbaijan agreed to a deal to end weeks of fierce fighting.

Earlier the Elysee Palace said in a statement that France was studying the parameters of the ceasefire agreement, but said any lasting agreement needed to take into consideration the interests of Armenia, Reuters reported.

Macron also urged that Turkey, which backs Azerbaijan, “end its provocations” in the conflict, according to AFP.

“France firmly calls on Turkey to put an end to its provocations about Nagorno-Karabakh, to show restraint and to do nothing that compromises the possibility of a lasting agreement being negotiated between the parties and within the framework of the Minsk Group,” Macron said.

Macron’s office quoted him as saying that efforts should be made “without delay” to try to come up with a “lasting political solution to the conflict that allows for the Armenian population of Nagorno-Karabakh to remain in good condition and the return of tens of thousands of people who have fled their homes.”

The French president said he will actively pursue his consultations with Russia and will meet “very soon” with the Armenian and Azerbaijani leaders.

Meanwhile, French Foreign Minister Jean-Yves Le Drian warned Ankara that if it does not adhere to the terms of the agreement reached Tuesday between the presidents of Russia and France and the Armenian prime minister, the EU may impose additional sanctions against Turkey, reported Tass.

“We consider it important that Turkey absolutely strictly adhere to the agreed ceasefire because otherwise, it risks facing increased sanctions,” Le Drian said.

The minister added that in December the EU countries will hold another summit, at which, among other things, Turkey’s aggressive behavior will be discussed.

“Earlier, 27 countries of the community have already decided that if Turkey does not change its behavior, measures will be taken against it, including sanctions – these options are already on the table,” Le Drian stressed.

“I have spoken more than once about Turkey’s belligerent and unacceptable behavior. President Erdogan calls for hatred against our country and insults the values on which our nation is based,” Le Drian said.

A Call for Calmness from the Catholicos of All Armenians