Pashinyan Calls for Prime Minister Elections ‘In One Week’ 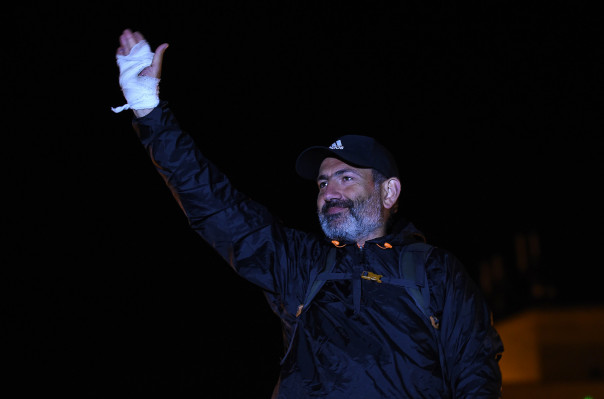 Leader of the opposition, Armenian MP Nikol Pashinyan holds a victory speech after the RA Prime Minister Serzh Sargsyan has resigned due to days of large-scale street protests against him on Republic Square of Yerevan, Armenia

Nikol Pashinyan, who has led the opposition protests against Sarkisian’s rule, told a jubilant crowd at Republic Square on Monday that their demand is for the election of a new prime minister must take place in a week.

Pashinyan proposed that after the election of a new premier, a new government will be formed. As for snap parliamentary elections, Pashinyan said that the vote should take place “within the soonest possible time.”

Pashinyan also announced at the rally that at 11 a.m. local time on Wednesday, he will meet with acting prime minister Karen Karapetyan at the Marriot Hotel, the site of a meeting on Sunday where Sarkisian walked on during a meeting with Pashinyan after threating to unleash a scenario reminiscent of March 1, 2008 when 10 people were killed during clashes with police after Sarkisian was elected president. Pashinyan said his meeting with Karapetyan will focus on the “government transition agenda.”

“The peaceful ‘velvet’ revolution cannot be left unfinished. It has to continue until the end and I hope that all of you stand firm in the name of that victory,” Pashinyan told the thousands of rally participants.

Meanwhile, the government of Armenia tendered its resignation, which was immediately ratified by Armania’s president, Armen Sarkissian, who played an interesting role during the protests over the weekend by going to Republic Square and after walking among the protesters, meeting with Pashinyan. After that incident, it was announced that then prime minister Sarkisian would meet with the opposition leader the following day, in what became an historic turning point in the 10-day-old protests. Leader of the opposition, Armenian MP Nikol Pashinyan holds a victory speech after the RA Prime Minister Serzh Sargsyan has resigned due to days of large-scale street protests against him on Republic Square of Yerevan, Armenia