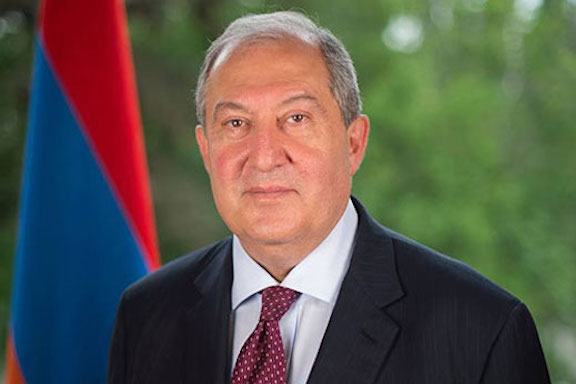 President Armen Sarkissian on Tuesday morning (local time) issued an announcement regarding the agreement that was reached between Armenia, Azerbaijan and Russia to end the military attacks in the Karabakh conflict zone.

Sarkissian said that he, as president of the Republic of Armenia, was not consulted on the agreement. He insisted that any agreement on Artsakh—the fate of the Armenian people—must be reached based on the aspirations of the Armenian nation with the relevant consensus.

He called for consultations to discuss to achieve solutions for the defense of our national interests.

Below is the translated text of the president’s statement.

Sadly, no consultations or discussions took place with me, as president of the Republic, about the agreement and I have not participated in any negotiations.

The settlement of the Karabakh conflict is an important question that has national ramifications. Any step, activity, or decision, especially signing any agreement, regarding the fundamental security of Armenia, Artsakh and the Armenian people must occur through comprehensive discussion and consultations.

I am stressing that fate of Artsakh, thus the Armenian nation can be resolved only by taking into consideration our national interests and aspirations and only based on a national consensus.

Taking into consideration the deep concern of a broad range of our people, given the current situation, I am organizing immediate political consultations in order to coordinate solutions that stem from the agenda of defending our national interests in the shortest time period.

As the president of the Republic, at this decisive time for our nation, I consider the fostering of unity as my current mission. I hope that during the next 10 days we will be able to bring about such unity that will make me believe that I have harnessed all my abilities in service my homeland.