Raffi Bedrosyan Tells The Story Of Hidden Armenians In A New Book: “Trauma and Resilience: Armenians in Turkey” 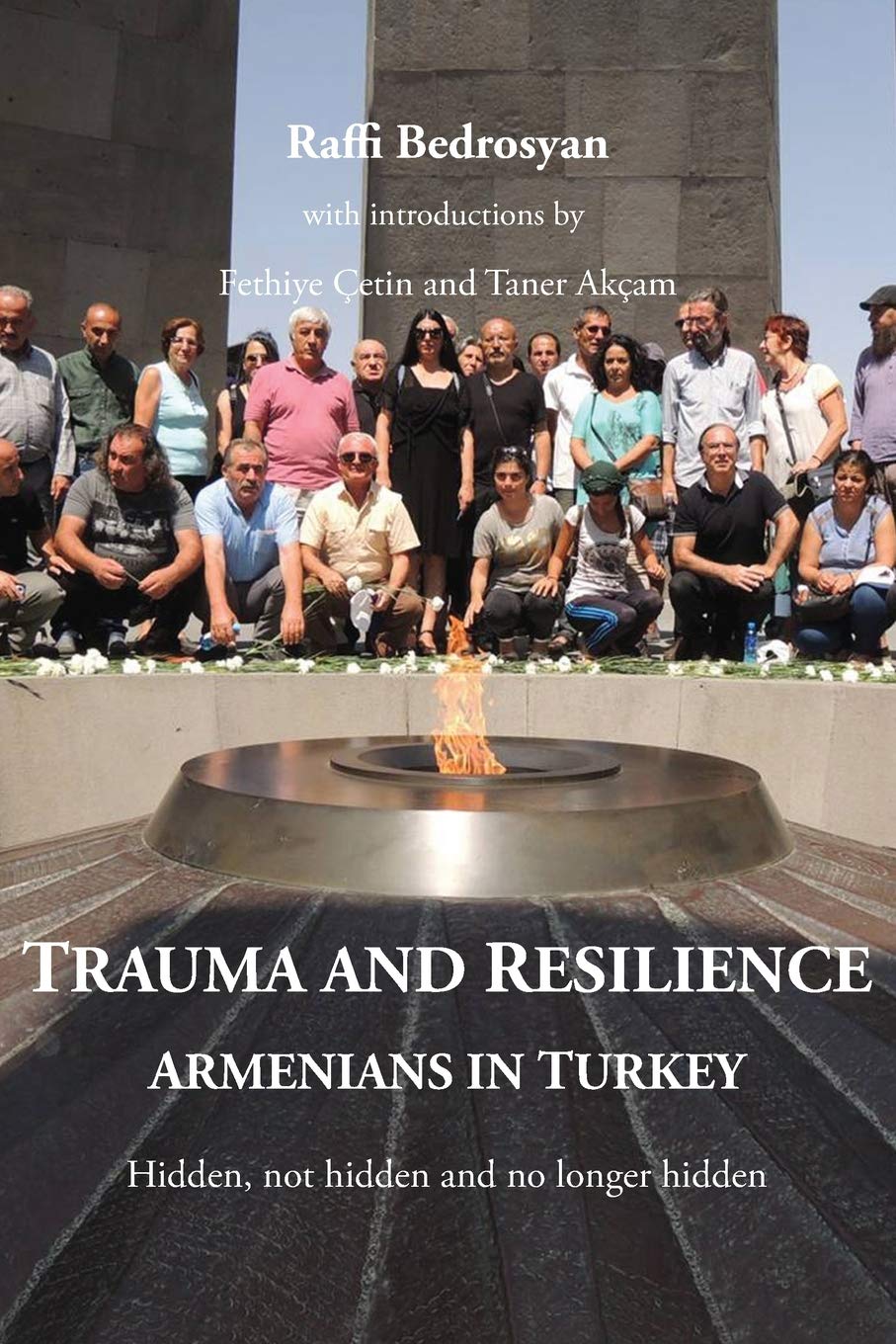 The Armenian Genocide in 1915 caused the destruction of 1.5 million Armenians living in historic Armenia. To escape the fate of their compatriots, many Armenians stayed behind, converting to Islam to save themselves. Today, they are known as the ‘Hidden Armenians’ in Turkey, often unable to speak up or reveal themselves- the living victims of the Genocide.

Raffy Bedrosyan, during his numerous visits and activities in Eastern Turkey, has met many hidden Armenians and chronicles their storie sand awakening in a new book titled “Trauma and Resilience: Armenians in Turkey” published by Gomidas Institute in London, England. Diyarbakir Armenians baptized at Etchmiadzin in Aug. 2014 during a trip organized by the author (standing second from R) (Photo: Gulisor Akkum/The Armenian Weekly).

Karin Saghdejian– Can you give us a comprehensive definition of the “Hidden Armenians”? Who can be considered a hidden Armenian nowadays?

Raffi Bedrosyan– During the 1915 Armenian Genocide thousands of Armenians children were orphaned and taken to Turkish orphanages, Turkish and Kurdish homes where they were forcibly Islamized, Turkified and Kurdified. These orphans, who were the living victims of the Genocide, had to endure difficult living conditions, often ending up in the family of the murderers of their own Armenian parents. But they secretly kept their Armenian identity, and passed on this secret to the next generations, most likely just before they passed away. Almost one hundred years after the Genocide, certain events in Turkey encouraged the present generation of hidden Islamized Armenians to reveal their Armenian identities, and to return to their Armenian roots, language, culture and in some cases, back to Christianity. The book explains some of these recent events, and my role in them, that triggered a new movement among the hidden Armenians to become ‘no longer hidden’.

K.S.- What triggered their awakening?

R.B.- Along with a bit more liberated conditions in Turkey, certain events helped trigger the courage of the hidden Armenians to openly say they are Armenian, and return to their roots. The reconstruction of Dikranagerd Surp Giragos Church was one trigger, giving the hidden Armenians not only from Diyarbakir but also from neighbouring regions, a secure place to congregate, to share life stories, to support and encourage one another during monthly breakfast meetings and social events. My two piano concerts started a series of cultural events, followed by other concerts, art exhibitions and conferences about Armenians. More than 1000 hidden Armenians attended my second concert on April 23, 2015 during Genocide centennial commemorations. Armenian language classes that we organized in Diyarbakr, Dersim and Istanbul were well attended. The trips that I organized to Armenia for groups of hidden Armenians from Diyarbakir, Dersim, Sasun, Urfa, Ayntap, Van and Hamshen regions of Artvin and Hopa created widespread interest among other hidden Armenians. People connected through social media, resulting in even marriages and baptisms. I called all these activities Project Rebirth, establishing a vast network among the hidden Armenians from various regions of Turkey.

K.S.- How many hidden Armenians are there and in what regions are they usually concentrated?

R.B.- It is very difficult to estimate the present number of hidden Armenians. But independent studies about the 1915 events indicate that there were about 200,000 Armenians who survived the Genocide by converting to Islam in certain regions, and about 100,000 Armenian orphans who ended up in Turkish/Kurdish homes. The population of Turkey increased sevenfold since then; therefore, we can estimate that the descendants of these hidden Armenians exceeds 2 million. To this number, we should add even greater number of conversions to Islam during the 1894-1896 massacres in eastern Turkey, and the significant number of Hamshen Armenians converted to Islam three centuries ago in northeastern Turkey, who still speak an Armenian dialect.

Even though the number of hidden Armenians or people with Armenian genes are in the millions, no one can know how many of them are aware of their Armenian roots, or if they are aware, how many of them would decide to come out as Armenian. But recent developments indicate that a large number of them are aware of their Armenian roots and wish to return to their Armenian identity, despite the risks and dangers. There are connections established with these hidden Armenians in almost every region of Turkey, but more concentrated in the east, northeast and southeast of Turkey.

K.S.- Through your many trips to Turkey and interactions with Hidden Armenians you have come to know their dilemma up close. That’s why you title your book “Trauma and Resilience”. Can you give us examples of traumatic experiences they go through in their daily life? Similarly, what acts of resiliency you can mention?

R.B.- The two common themes in most stories of the book are trauma and resilience.  There is generally widespread hatred, threats and discrimination against Armenians, in Istanbul and even more in the provinces. The word ‘Armenian’ is used as a swear word among Turks. The trauma is felt by most Armenians because of the danger and fear of losing their family, work or life, combined with anger and outrage against injustices and denials of truth. The trauma is felt even more by hidden Armenians because there is the added threat from their own family members who wish to remain as Islamized Turks and Kurds. Conversion from Islam to Christianity is punishable by death, in fundamentalist Islamic regions. Yet, there are these hidden Armenians willing to take the risk and return to their roots. The resilience of the Armenians in these dangerous circumstances can be explained by their flexibility and survival instincts. For example, there is a story about a hidden Armenian working as a Muslim cleric praying to Allah during the day, but reading his Bible secretly at night.

K.S.- It’s a topic of debate that this new type of Armenians should be considered “Armenian” or not. What are your personal thoughts about this as far as it relates to your experiences?

R.B.- One of my objectives in writing this book was to raise these questions, even though we may not have the answers yet. Who is an Armenian? What are the requirements to be called an Armenian? Does one have to have Armenian parents? Does one have to speak Armenian? Does one need to be Christian? Or is it sufficient that, once you are aware of your Armenian roots, you ‘feel’ Armenian and you wish to return to your Armenian roots, no matter what new risks and dangers that brings to you or your family? Secondly, I hope the reader thinks about the following questions: Who has the right or authority to decide whether someone is Armenian or not? Is it the Armenian government? Is it the Church – Etchmiadzin, Antelias or Istanbul Patriarchate? Is it community leaders? I think we should debate these questions, in order to face the new reality that there is a large and potentially critical group of people in the Armenian world, apart from Armenia, Artsakh and the Diaspora, which is the hidden Armenians, living right in our historical lands.

K.S. Is there any risk associated with your research and interactions in Turkey with hidden Armenians?

R.B.- The present conditions in Turkey have worsened a lot in the last three years. The limited progress toward democratization, respect for human rights or minority rights is replaced by a dictatorial regime, intolerant toward anyone who does not support the government. There are hundreds of thousands of Turks and Kurds, who are imprisoned. During clashes between the Turkish state and the Kurdish militants, the Surp Giragos Church was taken over by the state and used as a military headquarters, causing damage to the church. Our hidden Armenians have also suffered during this period, but they are resilient and will survive. Interactions among them and with me continue.

Following persistent communications by the Surp Giragos Church Foundation leadership, the government finally got convinced to repair the church at their own expense. The restoration work has now begun. It is my hope that once the church restoration is completed, the hidden Armenians will once again start organizing themselves, support one another and continue forming a bridge between Armenians and Turks toward a just and peaceful future.