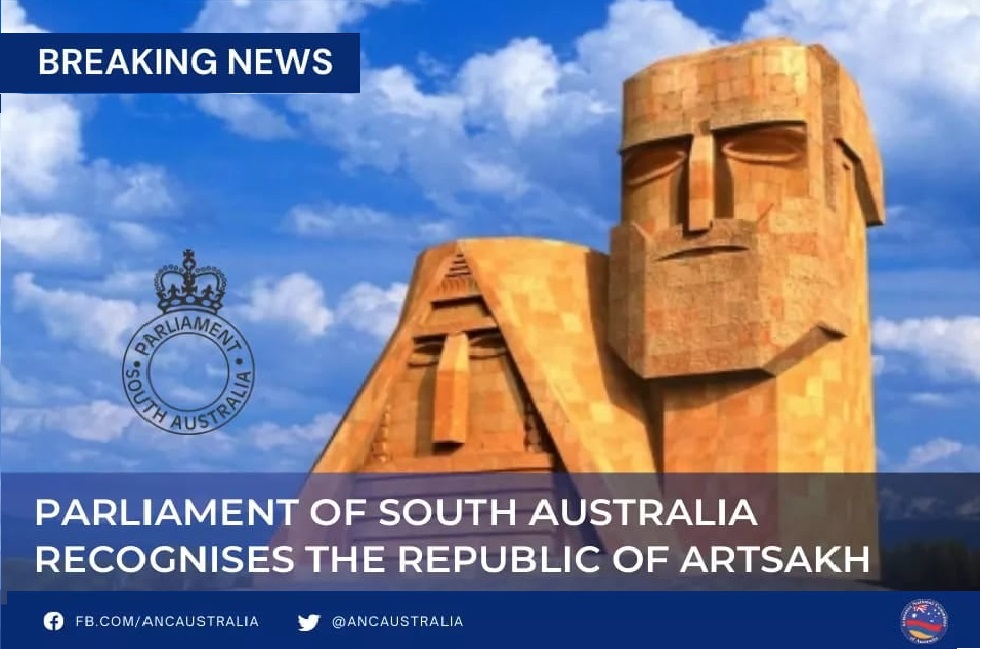 South Australia became the second state in Australia to recognise the rights to self-determination of the Republic of Artsakh, condemning Azerbaijan and Turkey for their invasion of the country’s indigenous Armenians in a motion passed with a vote in the House of Assembly, reported the Armenian National Committee of Australia (ANC-AU).
The motion follows one passed by the New South Wales Parliament’s Legislative Assembly in October 2020, and similarly “calls on the Federal Government to also recognise the Republic of Artsakh as the only permanent solution to the conflict to avoid further attempts of such military aggression”.
Member for West Torrens, the Hon.
Tom Koutsantonis MP

moved the historic motion, which also called out “the actions of President Erdogan of Turkey and President Aliyev of Azerbaijan in their pursuit of a policy of Pan-Turkish nationalism, which has previously led to genocide and which now threatens the Armenian population of Artsakh with ethnic cleansing”.

The House of Assembly considered a proposal to “adjourn the debate”, however this was defeated by the casting vote of the Speaker. The debate resumed and resulted in a vote – without dissent – in favour of the motion.
ANC-AU Executive Director Haig Kayserian thanked the Armenian Cultural Association of South Australia (ACASA) for their grassroots advocacy.
“We were proud to support members of Adelaide’s dedicated Armenian community for their tireless efforts on the ground, which have ensured South Australia’s parliament has joined a growing number of legislatures around the world supporting the legitimate rights to self-determination of the Republic of Artsakh,” said Kayserian.
“Mr Emil Davityan and the President of the Armenian Cultural Association of South Australia are a credit to the greater Armenian-Australian community and were a pleasure to work with to achieving this wonderful outcome for our heroic brothers and sisters of the Armenian Republic of Artsakh,” he added.
Emil Davityan added: “We thank Mr Tom Koustantonis and Ms Jayne Stinson for championing this motion and extend our gratitude to all parliamentarians who supported its passage in the name of human rights.”
“South Australia’s Armenian community wanted to play its part in supporting the people of Artsakh, bringing attention to the critical humanitarian issues in the region and contributing to an enduring and peaceful settlement to the conflict. The community thanks all who supported it in its endeavours.”
—
READ THE FULL MOTION AND MORE AT http://www.anc.org.au/…/South-Australia-Recognises-the…
Prev post