The 1942 Wealth Tax Disaster of Turkey 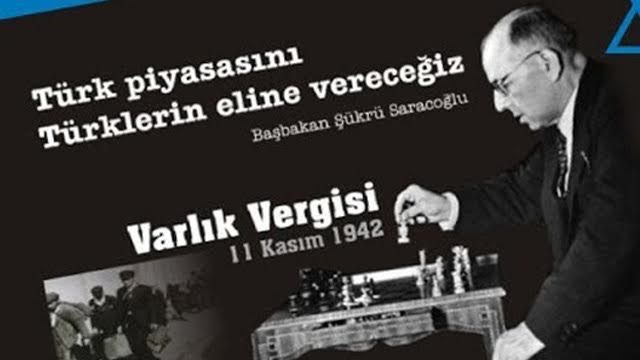 November 11 is known as the Remembrance Day in the USA, Canada and other allied nations, a day to honor and remember the soldiers who died during the service to their country, starting from World War One. But Armenians and other minorities in Turkey remember November 11 as the day of legalized robbery and forced bankruptcy by the Turkish government during World War Two.

The Wealth Tax legislation was passed on November 11, 1942, imposing arbitrary, unbearable taxes on Armenians, Greeks and Jews living in Turkey, not based on their income but on their known or ‘imagined’ assets. The result was economic destruction of the remaining minorities in Turkey and complete transfer of wealth, production and economic activity from the minorities to the Turks, effectively ‘nationalization of the economy’. This article provides a summary of the events surrounding the legislation, making use of memoirs of some Armenian families who suffered the consequences, as well as articles written by Turkish sources such as investigative author and historian Sait Cetinoglu and Istanbul Tax Office accountant at the time, one of the implementors of the legislation, Faik Okte.

The justification for the wealth tax was to prevent profiteering and black-market riches created during the war conditions. For a few months before the legislation, the Turkish media continuously published articles of wealthy minority opportunists and caricatures of ‘black market Jews’. But the government saw this situation as an opportunity to ‘eliminate’ minorities from the economy. The Prime Minister Sukru Saracoglu explained the government policy in a speech in August 1942: ‘We are Turks and Turkists forever. We do not wish for the dominance of any palace, class or capital, we just want to ensure the dominance of the Turkish nation’. The legislation proposed to tax people based on their ethnic identity and religion. People were labelled Moslem, Non-Moslem and Converted (Donme). Donme people were Jews, mostly from Thessaloniki, who had converted to Moslem Turks. The non-Moslems were further classified as Armenian, Greek and Jewish, and taxed according to their ethnicity. Armenians were taxed the most, at 232% of their assessed wealth, Jews at 179%, Greeks at 156% and Moslem Turks only at 4.94%. Faik Okte writes that some Turks rejoiced, thanked God and sacrificed animals upon hearing the low tax percentage for them, which also meant that they would be able to buy the assets of the non-Moslems at auctions at ridiculously low prices.

The wealth tax legislation was passed in the Parliament on November 11, 1942, without any debate. It proposed to establish tax assessment commissions, members of which were all Turks, mostly businessmen and merchants competing with the Armenian, Jewish and Greeks, obviously to benefit the most from the bankruptcy of the minorities. There could be no objection or appeal to the assessed tax, with a deadline of 15 days to pay the assessed tax in cash. At the end of 15 days, the remaining assets of the persons incapable of paying the assessed tax would be auctioned off for non-payment, and the person would be sent to labour camps in eastern Turkey in order ‘to pay his debt by physically working’. These labour camps were established for road, railroad and tunnel construction projects, by breaking stones from rocky mountains under deplorable working and living conditions, sleeping in tents in freezing weather, with minimal food and water.

The tax assessment commissions finished their work by December 1942. About 87% of the assessed taxes were for non-Moslems, 7% for Moslem Turks and the remaining 6% for non-

citizen foreigners. There are anecdotes of tax assessment commission members deciding the fate of Armenian and Greeks by throwing ‘heads or tails’ coins, to insert how many zeros on their assets and wealth taxes. Some of these commission members were known for their hatred for Armenians, who were the children of the Armenian Genocide perpetrators, continuing the destruction of the remaining Armenians. During January 1943, thousands of real estate, houses, shops, flats, apartment buildings, factories, machinery and equipment changed hands from Armenians, Greeks and Jews to Turks and Turkish institutions. About 67 % of the real estate were grabbed by Turks, and 30% by the Turkish state. Most of the valuable real estate, designed and built by Armenian and Greek architects and owned by minorities on the main thoroughfare of Istiklal Caddesi, formerly Rue du Pera, changed ownership during this time.

Toward the end of January 1943, auctions started to liquidate remaining assets of the minorities. The auctioned assets were not only house contents such as furniture and carpets. Among the heart-wrenching stories, the rocking horse toy of a seven-year old Armenian girl was grabbed by a policeman, ignoring her cries and pleadings. The wheelchair of a disabled Armenian old lady was removed after she was unceremoniously dumped on a mattress. In the dead of the cold winter, stoves and even blankets were removed from homes to be auctioned off. The dental instruments of an Armenian dentist, my mother’s family dentist, was sold based on the weight of the metal in the instruments.

We should emphasize that even though the justification for the Wealth Tax legislation was to collect money from the profiteering businessmen, it was applied not only to the wealthy but even to the poorest people, if they were Armenians, Greeks or Jews. There were thousands of low income Armenians such as street vendors, fishermen, labourers, porters, fruit sellers, janitors and salaried workers, who made up 44% of people forced to pay these taxes. People without any real estate assets made up 43 % of the assessed taxpayers. To give an example of the irrational assessment and unfairness of the legislation, a Jewish retired person was assessed 1,530 Turkish Lira tax, but ended up losing his flat valued at 24,000 Turkish Lira at an auction.

Between January and July 1943, 1229 persons, all non-Moslems, were sent to labour camps to Askale near Erzurum for non-payment of the Wealth Tax. Unable to withstand the harsh working conditions, lack of food and water, 21 persons passed away. They would be placed in wooden boxes and buried in the fields or mountains, without any funerals nor clerics. One of the most unfortunate incidents is the fate of a Greek who became sick in the labour camp in Erzurum, wrote a letter to his wife in Istanbul to sell the last piece of their family jewelry so that they can pay off their debt and he can return. The wife finally sells it, pays the debt to the tax office, sends the receipt proof to Erzurum for the release of her husband. Erzurum labour camp officials respond that her husband has passed away three days ago.

The Turkish government ended the Wealth Tax legislation in September 1943, after New York Times and other foreign media started writing about it. The Parliament decided not to demand payment from still uncollected taxes at the end of September 1943 and people were allowed to return from the labour camps. A total of 314 million Turkish Lira was collected, mostly from the non-Moslem minorities. This sum was equivalent to 80 % of the 1942 Turkish state budget of 394 million Turkish Lira.