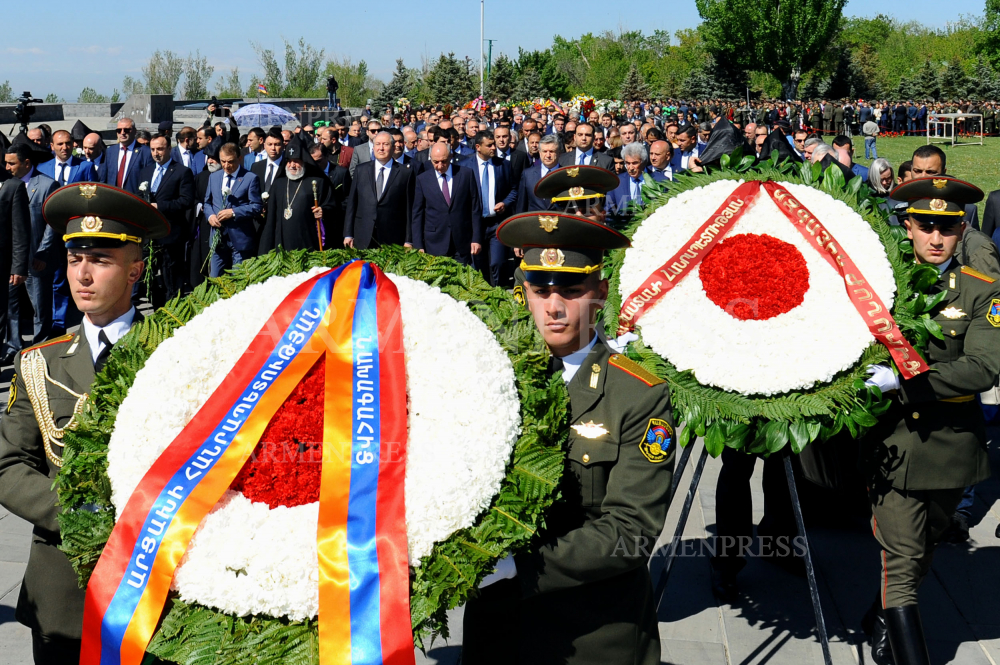 (Armenpress)- President of Armenia Armen Sarkissian, President of Artsakh Bako Sahakyan, acting Prime Minister of Armenia Karen Karapetyan, Speaker of the Parliament Ara Babloyan, Cabinet members, MPs, as well as other officials pay tribute to the memory of the Armenian Genocide victims in the Tsitsernakaberd Memorial on April 24. His Holiness Garegin II, Supreme Patriarch and Catholicos of All Armenians, delivered prayer at the Eternal Flame. The officials paid tribute to the memory of 1.5 million victims with a moment of silence. The Armenian Genocide perpetrated by the Ottoman government has been documented, recognized and acknowledged by eyewitness reports, laws, resolutions and the decisions of numerous states and international organizations.

There are numerous documents considering the massacres of the Armenian people as a pre-planned and thoroughly implemented act of genocide. Organizations like the Council of Europe, the European Parliament, a number of UN Committees, the World Council of Churches, MERCOSUR parliament and others acknowledged the Armenian Genocide.

The Netherlands adopted a resolution reaffirming the recognition of the Armenian Genocide on February 22, 2018 according to which a representative of the country’s government must visit Armenia every five years to participate in the Genocide commemorative events. The first official, State Secretary of Finance of the Netherlands Menno Snel this year is attending the commemorative events.