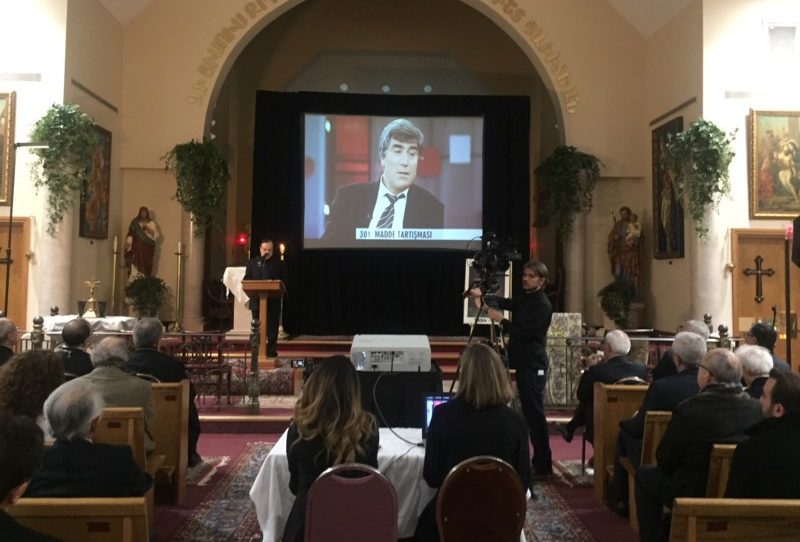 On the 11th anniversary of Hrant Dink’s assassination, the Armenian community of Toronto gathered at St. Gregory Armenian Catholic Church to honour his legacy and remember his message for humanity and love.

Journalist, Filmaker, and Professor at Carleton University, Mr. Kumru Bilici had this to say about Hrant Dink.

“He fought for everyone…there were no Turks, Kurds or Armenians when its comes to injustices. He deeply cared about freedom of expression and believed that there is nothing that we cannot solve through dialogue, freely expressing our views and listening to one another. I thank you all for honouring this incredible human being, our Martin Luther King.”

Dr. Payam Akhavan, a famed human rights lawyer and Professor at the McGill School of Law, served as the keynote speaker of the event. Dr. Akhavan eloquently explained the complexity of Turkish civil society, where ethnic nationalism has been defining “identity” by excluding and demeaning others.

“When we stoke the fans of hatred, the consequence is ethnic cleansing and genocide…All great evils begin with words – that demean and dehumanize others.”

This is exactly what Hrant Dink fought against. His mission was to find the shared humanity amongst all citizens of Turkey. For Hrant, there were no Turks, Kurds, Alevis, Jews, Greeks, Yezidis or Armenians when it came to injustices. His mission was to destroy the “us vs. them” notion and help Turkey to become a true democracy.

Father Elias Kirijian, founding pastor of St. Gregory the Illuminator Armenian Catholic Church and the host of the event, opened the event by asking the audience to take a moment and get to know the person sitting next to them. This was a kick start of the celebration and a wonderful way to put Hrant’s message into practice.

Megan Reid, Outreach Coordinator of The Zoryan Institute, then painted a picture of today’s political environment in the United States, Turkey and Europe of risingpopulism of religious, ethnic and racial exceptionalism in contrast to upholding universal human rights violations.

Raffi Bedrosyan, Special Advisor for Turkish Affairs to the Zoryan Institute and Representative of the Bolsahay Cultural Association, took the audience through a journey of Hrant’s life and showcased how intellectuals, novelists, journalists, filmmakers and friends were profoundly impacted by Hrant’s mission. He concluded his presentation by sharing Hrant’s core question:

“Will we act like those responsible for the great atrocities of the past, or will we learn from those mistakes and write new pages worthy of civilized humanity and the elimination of us vs. them?”