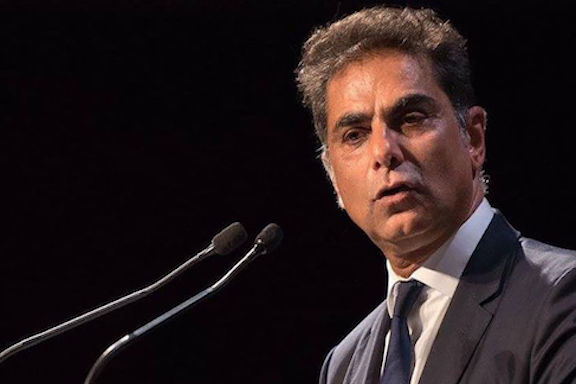 ARF Bureau member Mourad Papazian. He is also the co-chair of the Coordinating Council of Armenian Organizations in France.

(Asbarez)- The governments of Turkey and Azerbaijan are working overtime to exert pressure to ensure that a resolution recognizing Artsakh, scheduled to be discussed by the French Senate on Wednesday, fails.

“There is enormous pressure not only from Azerbaijan but also from Turkey,” Armenian Revolutionary Federation Bureau member and the co-chair of the Coordinating Council of Armenian Organizations in France Mourad Papazian told Sputnik Armenia on Tuesday.

Papazian said, however, that the French-Armenian community is working to counter those pressures both within the political and diplomatic arenas to ensure that “France remains steadfastly behind the concept of recognizing Artsakh, which will resolve the security issue.”

He pointed out that France is a co-chairing country of the OSCE Minsk Group, thus it is important for it to realize that the future status of Artsakh can only hinge on its independence.

On numerous occasions, France has discussed the status of Artsakh and has said that only through the recognition of Artsakh’s independence can the security its security be guaranteed, explained Papazian who cited the 45-day war as an example, as well as the now-infamous November 9 announcement that ended the military activities. He said the agreement demonstrates the imperative for the international recognition of Artsakh.

He said that negotiations on the settlement of the Karabakh conflict must continue because not only are there territories and cultural monuments that were lost, but also individuals who have been captured. “It is quite evident how Azerbaijan is treating those captives,” said Papazian.

The ARF leader explained that the Armenian community in France has worked hard to get various municipal and regional governments, as well as influential individuals, to call on the French government to recognize Artsakh. He said Paris and its surrounding townships, Marseilles and its regional cities, as well as other areas, have already expressed their position on the matter, paving the way for the French Senate to take up the measure, scheduled for Wednesday.

“We are confident that [the measure] will succeed,” Papazian told Sputnik-Armenia. “The ‘end of war’ agreement does not contain any provisions for Artsakh’s future status. However Artsakh still exists—there’s a government, a parliament, and displaced persons are returning to their homes. Hence, we have to work toward strengthening Artsakh by advancing its international recognition.”

“When senators are calling on France’s president to recognize Artsakh, it means the people of France are supporting us, which is an important aspect for the Armenian advocacy efforts. There have to be more such resolutions passed,” said Papazian.

Last week, mayors of 15 cities, as well as the Paris city council, recognized Artsakh and urged a vote on the pending resolution in the French Senate, which has been signed and endorsed by leaders of the five most influential factions represented in the senate.

Turkey is Registering Syrians from Afrin to Settle in Artsakh