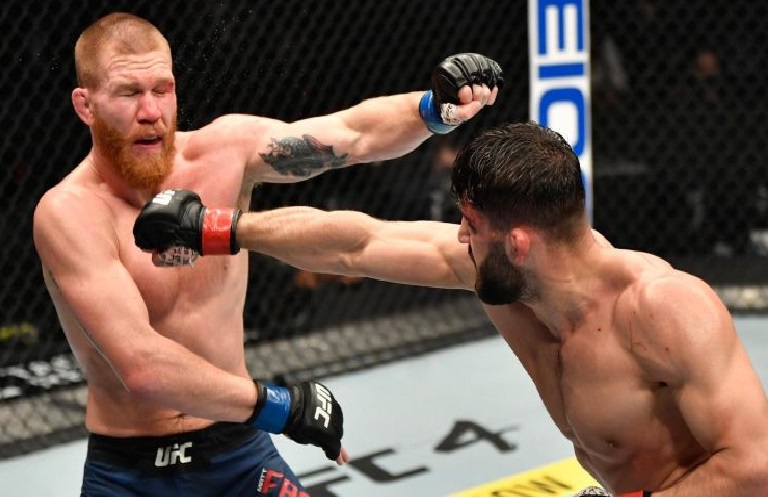 Tsarukyan raised the Armenian flag to celebrate the victory.

“I watched Matt’s fights and decided, like, I have a new opponent, I have to do a new game plan and I’m really happy I won,” Tsarukyan said after the fight.

The loss ended a two-fight win streak for Frevola (8-2-1, 2-2-1 UFC), who hadn’t fought since 2019 as three scheduled bouts in 2020 were canceled because of the coronavirus pandemic, a positive COVID-19 test from a cornerman and an injury.

Tsarukyan (16-2, 3-1) pressured Frevola from the start of the bout with his grappling and body control. Frevola defended well in the first round and landed two good shots in the closing seconds.

But Tsarukyan continued to show his grappling advantage as the fight went on, landing 10 of 12 takedowns and mixing in some effective striking. Frevola, who trains at Gracie Tampa South at Longo and Weidman MMA, fought back in the second round, connecting on a big right hand while standing on one as Tsarukyan held his other leg in the air. That shot opened a cut on the 24-year-old Russian, but he again used his grappling to minimize any further damage.

The third round opened up with Tsarukyan slipping under a right hand from Frevola and taking him down. Frevola got back to his feet rather quickly. On another successful takedown by Tsarukyan midway through the round, Frevola attempted a guillotine choke. He needed a finish to get the win, but his opponent was able to slip out and end up in top position.

“I wanted to choke him, but this guy, he has a very good Brazilian jiu-jitsu, he’s a brown belt, he’s not easy,” Tsarukyan said of Frevola. “I tried sometimes, but he has good defense. It was very hard, but my freestyle wrestling is better and so was my control, my striking, and I can do everything.”

Tsarukyan said he wants to fight a top-15 lightweight next and then called out Frevola’s teammate, Wantagh’s Al Iaquinta.

Polish Politician Says He Was Offered $50,000 To Not Publish A Brochure On Azeri War Crimes Against Armenians

ARS Canada “With the People, For the People” in Armenia