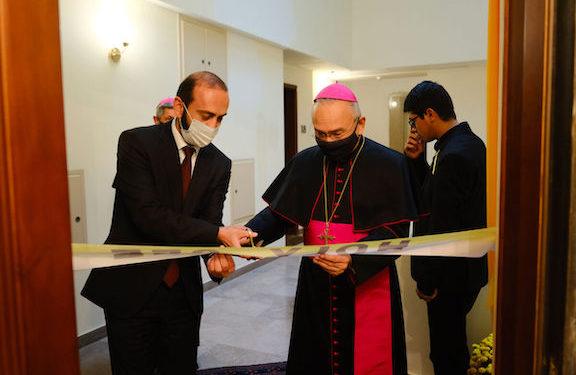 Foreign Minister Ararat Mirzoyan with Archbishop Edgar Peña Parra during the ribbon-cutting ceremony for the Vatican’s diplomatic mission in Yerevan on Oct. 27, 2021

(Asbarez)- In its ongoing efforts to strength its relations with Armenia, the Vatican on Wednesday opened a diplomatic mission in Armenia, which will be known as the Holy See’s Apostolic Nunciature office.

On hand for the opening was Archbishop Edgar Peña Parra, the Vatican’s Deputy Secretary of General Affairs, who along with Armenia’s Foreign Minister Ararat Mirzoyan led the opening ceremony.

As the two countries mark the 30th anniversary of diplomatic relations, the Holy See sees it as a further opportunity to look “at building a prosperous relationship for the benefit of all Armenians,” Peña Parra said.

“The consistent position of the Vatican on the peaceful settlement of the Nagorno-Karabakh conflict, as well as on maintaining peace and stability in the region is remarkable for us. Particularly, the messages of His Holiness during and after  the aggression of Azerbaijan against Artsakh, as well as the calls for the immediate release of prisoners of war, were of great importance,” said Mirzoyan said during a press conference with Peña Parra following the opening ceremony,

“As you know, Azerbaijan still violates international humanitarian law, as well as the provisions of the November 9 trilateral statement, and continues to hold Armenian prisoners of war and captured civilians. We ask His Holiness the High Priest to always remember the Armenian prisoners of war in his prayers and public messages and to stress the need for their immediate release,” he added.https://www.youtube.com/embed/JO9rPH7xZdE?feature=oembed

Mirzoyan said that after the 44-day war, the Armenian historical-cultural and religious heritage of Artsakh in the territories currently under the control of Azerbaijan is now in constant danger of destruction.  Meanwhile, he said, the atrocities against the places of worship and historical-cultural monuments, which are the cultural and spiritual heritage of the peoples, grossly violate international law and stressed the need to undertake steps to prevent these incidents.

“The Armenian people are grateful to His Holiness the High Priest for the principled and unequivocal message of the recognition of the Armenian Genocide. Condemnation of this crime against humanity is of utmost  importance for preventing recurrence of such atrocities in other parts of the world,” the Foreign Minister stated.

Relations between the Church of Rome and Armenia go back to ancient times, almost to the very origins of Christianity, when faith in Jesus spread from Jerusalem to the “known world,” where meetings and commercial and cultural exchanges between peoples became an occasion for debates that touched the “meaning” of life and existence.

Over the centuries, this ancient and prolific relationship between Armenia and the Holy See has grown in strength. Official diplomatic relations in modern times can be traced back to May 23, 1992, after Armenia gained independence.

Since then, the Holy See has continually maintained diplomatic representations to foster relations, along with other initiatives and channels of various Catholic institutions. The first apostolic nuncio appointed to Armenia was Monsignor Jean-Paul Aimé Gobel (1993-1997).  The current Holy See’s representative since 2018 is Archbishop José A. Bettencourt.