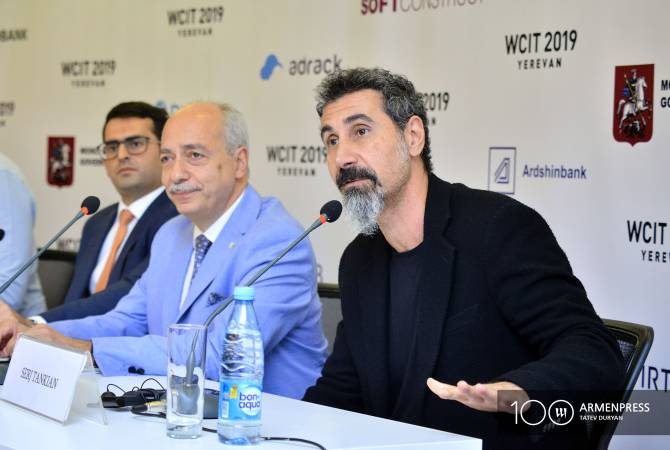 ARMENPRESS- World famous Armenian figures like Co-founder of Reddit and Initialized Capital venture company Alexis Ohanian, soloist of System of a Down group Serj Tankian, producer of the film ”The Promise” Eric Esrailian and President of Synopsis Armenia Yervant Zorian have developed an idea to create a new online platform named ”High connect” that will link the Armenians of the world, ARMENPRESS reports the authors of the idea announced on October 8 in a press conference in the sidelines of the World Congress on Information Technologies.

”We will create a pan-Armenian online platform ”High connect”, that will give an opportunity to the Armenians throughout the world with various preferences to be linked”, Serj Tankian said.

Serj Tankian noted that they have not planned the process of the work yet, they are still general ideas. ”For years we were thinking what to do to make Armenia attractive not only for Armenians, but also for others. We were thinking how to connect world-spread Armenians. And after thinking and discussing for a long period we came to the conclusion that we will use our shared interests to create small communities”, Tankian said.

Alexis Ohanian noted that they have understood how fortunate they are to have so much opportunities. ”We must take lessons from our careers and use them for this platform, so as Armenians throughout the world, in the Diaspora can use it and prosper”, Ohanian said, emphasizing that the common idea has joint them.

He noted that there are networks where Armenians can keep in touch anyway, but they want to create a special zone where the people will know what they are looking for. Ohanian added that the project does not pursue profit.

Eric Esrailian said that they have been discussing the idea for nearly one year, but they started thinking about that much earlier. ”It will be really a great thing to have such a platform for connection. Not only technology will develop in Armenia, but it will ensure the link between Armenia and Armenians abroad. We are very devoted to this idea and will invest all our experience”, Eric Esrailian said.

Edited and translated by Tigran Sirekanyan