100 U.S. Representatives Call on Biden Administration to Stand with Artsakh and Armenia 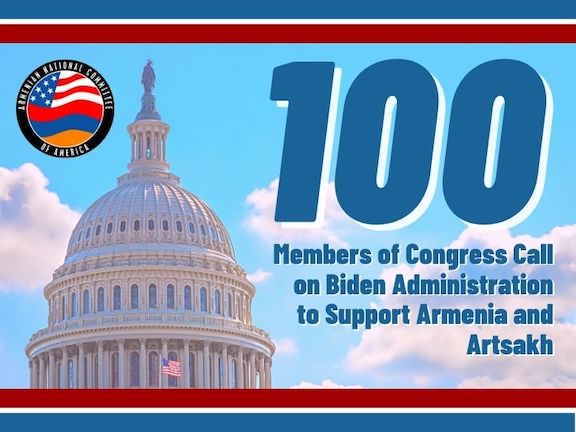 WASHINGTON—One hundred Members of Congress – from more than twenty U.S. states – have called upon the Biden Administration to undertake concrete steps for Artsakh’s survival and Armenia’s security, in a bipartisan Armenian Caucus letter strongly supported by the Armenian National Committee of America.

“The strong Congressional participation in the Armenian Caucus letter to the Biden Administration reflects and also powerfully reinforces growing bipartisan support for Artsakh among legislators from across America,” said ANCA Government Affairs Director Tereza Yerimyan. “We look forward to working with the leadership of the Caucus and each of our legislative friends to translate these pro-Armenian, pro-peace policy priorities into action.”

The letter, addressed to the Secretaries of State and Defense, underscoring the severity of the regional crisis caused by six weeks of unrelenting Azerbaijani and Turkish aggression last fall, proposes urgent action on the following U.S. policy priorities:

— U.S. emergency assistance that provides the people of Artsakh with the ability to reconstruct their communities and rebuild their lives without fear of further bloodshed.

— U.S. re-engagement in the search for an enduring regional settlement – based on the fundamental right of self-determination – that protects the security of Artsakh and helps to ensure another war does not break out.

— U.S. recognition of the right to self-determination for the people of Artsakh and their role as a legitimate negotiating party in resolving this conflict.

— U.S. leadership in securing the immediate release of Armenian prisoners

— U.S. accountability, including sanctions against high-ranking Azerbaijani and Turkish leaders, the withholding of U.S. aid to Baku, and ending the waiver of Section 907 of the Freedom Support Act.

— U.S. recognition of the Armenian Genocide by President Biden

The full text of the letter is provided below.

As bipartisan Members of Congress who are engaged in the US-Armenia relationship and interested in strengthening it, we write to offer our congratulations on your recent confirmations and to share a list of our bipartisan priorities we hope to work together on during the 117th Congress.

One of the most pressing issues for the Caucus and for the future of American foreign policy in the South Caucasus region is the ongoing humanitarian crisis in Armenia and Nagorno-Karabakh (Artsakh). As you are aware, Azerbaijani and Turkish forces initiated an unprovoked attack on September 27, 2020, leading to six weeks of devastating fighting that killed an estimated 5,000 people and forced more than 100,000 ethnic Armenians to flee from the Karabakh region. Azerbaijani forces were able to make rapid advances into the region with the aid of Turkish-backed foreign mercenaries, many alleged to have ties to internationally recognized terrorist groups, Bayraktar drones that utilize American components and technology, and heavy weaponry including the illegal use of cluster and white phosphorus munitions.

With the rising risk of a mass atrocity against thousands of Armenian civilians, Armenia agreed to a peace agreement brokered by Russia on November 10. This agreement brought an end to the fierce combat, but it has done little to address the immediate and significant problems of feeding, sheltering, and ensuring the safety of thousands of displaced families during the COVID-19 pandemic. In violation of the ceasefire, Azerbaijan also refuses to free dozens of Armenian prisoners of war and apprehended civilians, which illustrates how this agreement fails to address the structural issues that have caused uncertainty and fueled the Nagorno-Karabakh conflict for decades. There remain several important issues that must be resolved and many critical questions that must be answered before a binding and durable peace settlement can be reached.

First, the terms laid out in the current ceasefire are untenable for Artsakh’s long-term security and stability in the region. The United States cannot allow Russia, Turkey, and Azerbaijan to solely dictate and dominate the situation in Nagorno-Karabakh. While we have seen some reengagement in the Organization for Security and Co-operation in Europe (OSCE) Minsk Group process, we believe more must be done to pursue an enduring settlement based on the fundamental right to self-determination. We appreciate the response Secretary Blinken gave during his confirmation hearing to this end, stating that he will “reinvigorate U.S. engagement to find a permanent settlement to the Nagorno-Karabakh conflict that protects the security of Nagorno-Karabakh and helps to ensure another war does not break out.”

In negotiations, our diplomats must insist that any future settlement supported by the United States will provide the people of Artsakh with the ability to reconstruct their communities and rebuild their lives without fear of further bloodshed. This should include significant U.S. commitments to provide an urgently needed humanitarian aid and assistance package for the people of Artsakh. The international community, including the United States, also has an important role to play by finally recognizing the right to self-determination for the people of Artsakh and their role as a legitimate negotiating party in resolving this conflict. Absent this recognition, they will continue to face the threat of displacement by Azerbaijani and Turkish forces without any option for formal redress.

Another important component of ensuring lasting peace in the region is to hold destabilizing actors accountable. There is significant evidence that Azerbaijani and Turkish forces planned the invasion in the buildup to the September 27 assault on Nagorno-Karabakh. This evidence includes the stockpiling of armaments, including drones that killed many innocent civilians during the conflict, the July 2020 provocations by Azerbaijani troops in Armenia’s Tavush province, and several instances of large-scale joint military exercises near the Armenian border that foreshadowed the coming attacks. The United States and other international actors failed to acknowledge these warning signs and take necessary steps to prevent the sharp and unprovoked escalation of violence.

Actions that could have been taken at the time to halt Azerbaijani and Turkish aggressions included threatening sanctions on high-ranking officials from those countries and withholding aid, including ending the waiver of Section 907 of the Freedom Support Act and ceasing further military assistance through the Section 333 Building Partner Capacity program. We are encouraged by Secretary Blinken’s response during the confirmation process on this subject as well.

Similarly, the United States must reassess our policy toward Turkey. Turkish President Recep Erdogan’s regime reaps the rewards of the chaos he has sown in the Eastern Mediterranean, Libya, the Middle East, and the South Caucasus. His deliberate destabilizing behavior, which includes the installation of Russian made anti-aircraft missiles over the threat of sanction by the United States, demands a swift and decisive correction. We must learn from the failures of an appeasement policy used by past administrations toward Turkey and use every available diplomatic and economic tool to penalize these bad actors for their aggressions and abhorrent human rights abuses. If we do not act, we risk the likelihood that the Erdogan regime will trigger an ever-expanding zone of conflict.

Finally, the United States should seek to strengthen our strategic relationship with Armenia, a young democracy that has been shaken by last year’s events and the resulting uncertainty they have caused. We urge you to identify ways we can provide additional economic assistance to Armenia to support its democracy and development as well as respond to the significant number of displaced people who have fled the conflict in Artsakh. We also request that your Administration identify ways in which our economic, cultural, and other ties to Armenia can be improved to benefit Armenia and the large Armenian American diaspora in the United States. Those steps should include the formal recognition of the Armenian Genocide by President Biden on April 24, following in the footsteps of both the House and Senate who passed resolutions recognizing the fact of the Genocide during the 116th Congress.

Thank you for attention to these important matters. We stand ready to work with you to craft a policy in the South Caucasus region that is consistent with U.S. national security, universal principles of human rights, and our democratic values. Our hope is to further discuss these issues with you and your teams at the earliest convenience.