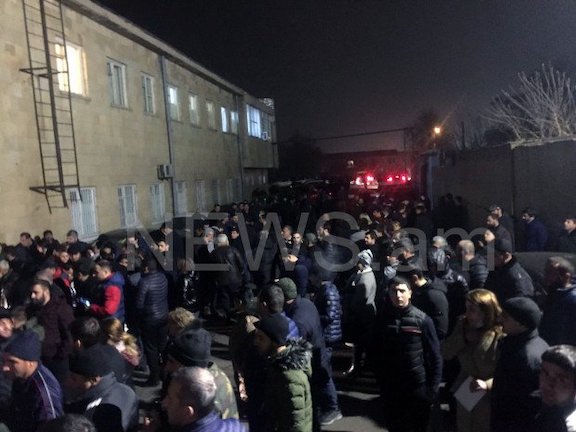 (Asbarez)- A Russian plane, carrying 44 Armenians who were held captive by Azerbaijan, landed in Yerevan’s Erebuni Airport late Monday night, marking an end to an uncertain situation facing their families and relatives, who have been demanding immediate action for their return.

The 44 captives were welcomed back to Armenia by Deputy Prime Minister Tigran Avinyan and Artsakh President Arayik Harutyunyan, who pledged that he and his government will do their utmost to advance the rehabilitation of the individuals in the coming days, weeks and months.

Hundreds of family and relatives of people presumed to be captive gathered at the Erebuni Airport awaiting word on their loved ones.

As each person’s name was read, cries of happiness, applause and cheers thundered through the tarmac, reported news.am, whose crew captured the emotional moment and the families’ joy at the chance of being reunited with their loved ones.

The captives were immediately taken to the hospital where they are to receive thorough health and forensic exams before being united with their families.

The return of the captives was mediated by the Russian peacekeeping mission, as well as the International Committee for the Red Cross, which reported on Monday that Azerbaijan had returned 44 captives, while two people were released back into Azerbaijani custody from Artsakh.

The two Azerbaijanis were not prisoners of war or civilians captured during the war, but rather two Azerbaijani insurgents who were captured and tried in 2014 on charges of murdering a 10-year-old local Armenian boy. Azerbaijan demanded their return.

Sources indicate that in addition to the murder, the two were also caught gathering intelligence on Artsakh military positions in Karvachar, which was surrendered to Azerbaijan as a stipulation of the November 9 agreement, which ended the war. One of the jailed Azeris also was allegedly gathering intelligence on the Sotk mine, which two weeks ago saw a stampede by 250 Azerbaijani troops that claimed to control 50 percent of the mine, catching Armenian mine workers off guard and endangering their lives.