A lot of joy, but a lot of nostalgia’: Toronto bids bittersweet farewell to TSO’s Peter Oundjian 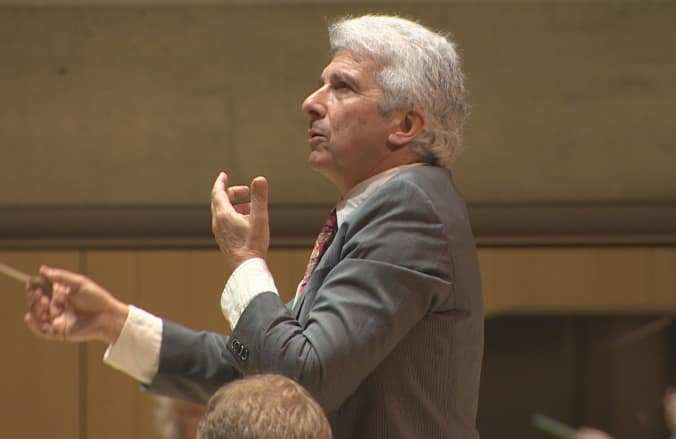 (CBC)- As a violinist, conductor and music director of the TSO — Peter Oundjian has created a legacy for himself while shaping one of the city’s biggest cultural institutions over the past three decades.​

In preparation of Oundjian stepping down as music director, The Toronto Symphony Orchestra (TSO) has been honouring him with farewell concerts for the month of June.

And after 14 years of international tours, music festivals and an overall rebranding of the orchestra, it was the city’s turn to honour the conductor at one of his final concerts Friday afternoon, a free event called Thank You, Toronto!

Mayor John Tory presented Oundjian with a key to the city and talked about his impact on the symphony. Toronto Mayor John Tory said it was an ‘honour’ to give Oundjian a key to the city. (CBC Radio-Canada )

“He has brought a fresh reputation to the TSO, not just in our hometown but in other parts of the world,” Tory said. “When Peter took over the TSO in 2004, it was not what you see and what you’d experience today.”

Oundjian was also given the status “Music Director Emeritus,” which means although he’s leaving Toronto and stepping down from the podium, he’ll be back in years to come to periodically conduct concerts.

“Musically, and in every other way, they just became a stronger team,” Oundjian said of the TSO.

Tory also reminded the audience that Oundjian launched his career when the orchestra was “going through some challenges.”

The musician started as a solo violinist for the symphony in 1981. He still remembers the atmosphere when he began conducting in 1998.

“I remember there was a real chilliness when I first came to conduct,” Oundjian said. “Playing wise, there was always a huge amount of talent.”

When he took the position of music director in 2004, Oundjian said he worked to increase the institution’s morale and funds, which were both lacking.

“You don’t actually create philanthropy, you identify it.” If someone isn’t really interested in making a significant donation to the symphony you’re probably not going to persuade them, they have to be open to it in the first place.

As for who’s replacing him, that’s still unknown, but Sir Andrew Davis, who was the TSO’s music director in the 70s and 80s, will fill in temporarily.

Oundjian is known for touring the orchestra throughout Europe, Israel, as well as making two sold-out appearances in New York City’s Carnegie Hall.

Here at home, Oundjian took the TSO to small communities in northern Ontario.

“What I guess I’ve worked on is to try to create much more freedom, much more communication, much more joy in music making and to also make the people who come to listen to us feel this positive energy, positive vibe, in the room,” he said.

He’s also credited for bringing in more than half of the TSO’s current musicians and for creating two new music festivals, including the New Creations Festival, which showcases new Canadian and international orchestral music.

“It’s pretty magical; it’s kind of like flying,” he said about being part of the orchestra. “It is one the most incredible examples of human cooperation that anyone can imagine.”

It’s my honour to present the Key to the City to the @TorontoSymphony Orchestra Music Director, Peter Oundjian. pic.twitter.com/KagC1sGcJw