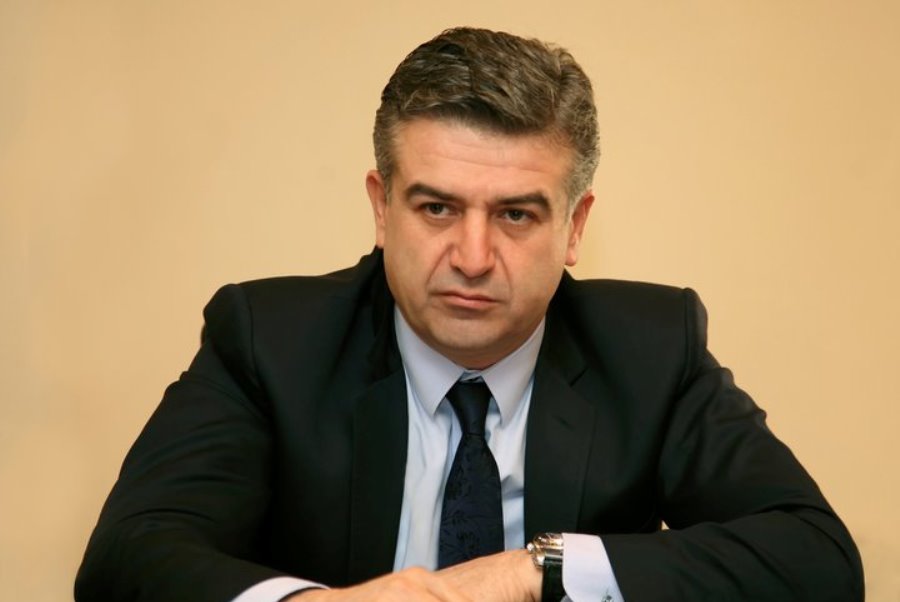 Pashinian proposed the meeting on Thursday after two weeks of massive demonstrations in Yerevan and other parts of the country which have led to the resignation of Prime Minister Serzh Sarkisian. He said the talks must focus only on a full handover of power to his opposition movement and be held in the presence of journalists.

“Negotiations where one party only dictates one agenda while the other cannot come up with a different agenda cannot be considered negotiations,” said Aram Araratian, Karapetian’s spokesman. “Besides, Karen Karapetian remains of the opinion that [the demand for] holding negotiations in front of the press suggests that the purpose of those negotiations is not to achieve any result.”

“That is why the acting prime minister regards as unpromising his participation in ‘negotiations’ which stand no chance of finding solutions,” Araratian added in a statement.

Karapetian already rejected these and other preconditions set by Pashinian when he refused a planned meeting with the protest leader earlier this week.

Pashinian denounced Karapetian’s stance at a news conference held shortly after Araratian’s statement. He claimed that the acting premier, who now seems to be the new de facto leader of the ruling Republican Party of Armenia (HHK), is “not confident about his negotiating skills.”

The 42-year-old leader of the opposition Civil Contract party insisted that the talks with the government must be televised. “It’s very important to be transparent in these processes,” he said.

Pashinian warned that the Armenian parliament, in which the ruling HHK has a clear majority, will deepen the crisis if it refuses to elect him interim prime minister at an emergency session slated for May 1. The handover of power would reflect “the will of the people,” he said. “If a Republican is elected prime minister, this crisis will not be resolved because we will continue our peaceful demonstrations and try to explain to the HHK and Karen Karapetian … that they don’t understand the political situation in Armenia,” said Pashinian. Accordingly, he urged supporters to “flood the streets and squares” and also surround the parliament building in Yerevan on May 1.

Pashinian also rejected the idea of a “neutral prime minister” who would govern the country until the conduct of snap parliamentary elections. In that case, he said, nobody would be able to prevent such a premier from doing “something bad.”

In a potentially significant development, Russian President Vladimir Putin on Thursday phoned Karapetian and called for a settlement that would be based on “the results of the legitimate parliamentary elections held in April 2017.” The elections were won by the HHK.

Pashinian insisted that Putin’s comments did not amount to a show of support for Karapetian. “As a country respecting international law, Russia is not interfering in Armenia’s internal affairs,” he said. “This is a purely internal Armenian affair.”

The opposition leader was due to hold a rally in Gyumri later in the day, and proceed to Vanadzor on Saturday. He told supporters on Thursday to suspend their “civil disobedience” actions in Yerevan for two days.

Also on Thursday, Pashinian met with President Armen Sarkissian and leaders of the Armenian Revolutionary Federation (Dashnaktsutyun), which pulled out of the governing coalition following Serzh Sarkisian’s resignation. A Dashnaktsutyun leader, Arsen Hambardzumian, described the meeting as “useful” but did not elaborate.

Earlier, Pashinian also held talks Gagik Tsarukian, a millionaire businessman leading the Prosperous Armenia Party (BHK), the second largest in the parliament. He confirmed on Friday that neither Tsarukian nor the Dashnaktsutyun leadership has so far promised to vote for his appointment as prime minister.

“I hope that Dashnaktsutyun and Tsarukian’s bloc will clarify their positions and announce who their deputies are going to vote for on May1,” he said.