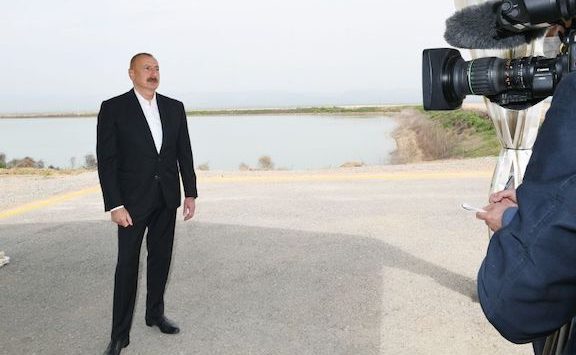 (Asbarez)- President Ilham Aliyev of Azerbaijan on Tuesday threatened to take Zangezur by force, “whether Armenia wants it or not,” adding to his latest threats against Armenia proper since the signing of the November 9 agreement that ended military actions in Karabakh.

“Just as before and during the war, I said that they must free themselves from our lands, or we will expel them by force. And so it happened. The same will be the fate of the Zangezur corridor,” added Aliyev.

“Our main rival is time, because the construction of a railway and a highway takes time. Therefore, all forces have been mobilized to implement this project. Thus, the Azerbaijani people will return to Zangezur, which was taken away from us 101 years ago,” stressed Aliyev.

Armenia’s Foreign Ministry was quick to condemn Aliyev’s “zeal to use force.”

“Such statements do serious harm to regional peace and stability. They reveal the false nature of Azerbaijan’s recent peace statements,” Armenia’s Foreign Ministry spokesperson Anna Naghdalyan said in a statement on Tuesday.

“Armenia will take all necessary measures to defend its sovereignty and territorial integrity,” Naghdalyan vowed. “We are in permanent contacts with our strategic ally [Russia] and with all of our partners who are interested in peace in the South Caucasus,” she stressed.

Naghdalyan emphasized that Aliyev’s latest threat was voices ahead of the anniversary of the Armenian Genocide.

Armenia’s Human Rights Defender Arman Tatoyan said Aliyev’s remarks in Tuesday point to Azerbaijan’s continued advancement of its “genocidal policy,” adding that the statement “contains intimidation of the entire population of Armenia, which is absolutely prohibited under international law. All this is done by openly distorting historical facts, presenting Zangezur as an Azerbaijani historical territory.”

Tatoyan cited further belligerent statements by Aliyev, who last week, on few occasions, said that all Armenians suffer from “psychological disorders, they are full of poison, are incomprehensible, are savages, are arrogant, have no morals.” while saying that the people Azerbaijan are “more superior.”

Tatoyan called Aliyev’s remarks a reflection of his “fascist policy,” calling on international organizations, especially those with human rights mandates, to take action.

“International organizations must take into account that it was their silence that contributed to more of the Azerbaijani atrocities during the war, and the incredible gross violations of human rights. This is the reason why the President of Azerbaijan makes such absolutely aggressive statements that undermine the foundations of international law,” said Tatoyan.