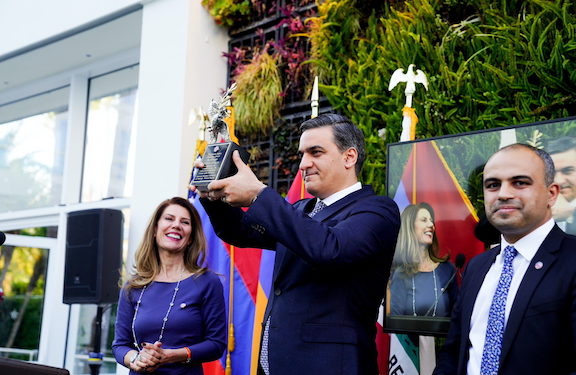 Dr. Tatoyan was hosted by the ANCA-WR for a two-week delegation trip to engage with community stakeholders, elected officials, academic circles, coalition partners as well as local and national media to provide a briefing on the current situation, including presenting on his latest reports on Azerbaijan’s torture and abuse of Armenian prisoners of war and civilian captives.

Immediately prior to the luncheon, Dr. Tatoyan participated in a press conference where he briefed local and community media on Azerbaijan’s November 16 incursion and assault on the Republic of Armenia which resulted in the deaths of at least 8 Armenian servicemembers and the capture of at least a dozen more – whom international human rights organizations have already noted have been subject to abuse and torture. Dr. Tatoyan also briefed the media on the status of prisoners of war, and ongoing international legal efforts – specifically, through Armenia’s trial against Azerbaijan at the International Court of Justice over its violation of the Convention on the Elimination of All Forms of Racial Discrimination.

The press conference was followed by the outdoor luncheon held at the iconic Beverly Hilton Hotel, which began with an invocation delivered by the Very Reverend Muron Aznikian of the Western Prelacy of the Armenian Apostolic Church and opening remarks welcoming dignitaries and honored guests delivered by ANCA-WR Board Member Lina Davidian Esq.

A video presentation (see below) highlighting the tireless efforts of the ANCA-WR over the course of the last two years, which in the face of the unprecedented COVID-19 pandemic – and faced with the unimaginable genocidal assault on the people of Artsakh and Armenia by Azerbaijan and Turkey – has never relented in its commitment to the Armenian Cause. With the onset of war, the ANCA-WR immediately sprung into action, mobilizing its resources to advocate for the security of Armenia and Artsakh – meeting with elected officials, championing legislation, raising awareness through the media, and mobilizing the Armenian-American community through demonstrations and grassroots advocacy across the country.

Following the video presentation, ANCA-WR Board Chair Nora Hovsepian, Esq. took to the stage and thanked all the generous donors whose support and encouragement continue to inspire the ANCA-WR team, and especially the event sponsors, Mr. & Mrs. Varant and Hoori Melkonian, for their unwavering support. In delivering the organizational message, Hovsepian emphasized the need for the Armenian-American community to remain laser-focused in its mission to ensure the security of the Armenian nation.

“Indeed, these are certainly dark days in the 4000-year history of the Armenian People, but history has shown that the light will shine again so long as we remain vigilant, engaged and proactive. It is this light, perhaps distant but still there, that keeps us here fighting for our Cause because we don’t have the luxury of just giving up, and because our People need us now more than ever,” remarked Hovsepian.

“We are all traumatized now with the war and its ongoing horrible consequences; our national pride is understandably wounded, and many of us feel paralyzed. But we must rise from these ashes just as our grandparents rose from the ashes of the Genocide, and we must continue our fight until victory is achieved, no matter how long it might take, for it is during the darkest of days that we must focus to see the light,” Hovsepian concluded.

The organization’s message was followed by a video presentation (see below) highlighting the important work of the ANCA-WR’s honoree, Dr. Arman Tatoyan in documenting the war crimes and other violations of international law perpetrated by the Azerbaijani regime dating back to the Four Day War in 2016. Dr. Tatoyan’s diligent documentation of the indiscriminate attacks on Armenian border villages, the harassment and intimidation of Armenian civilians, the constant incursions into Armenia’s territory, and the capture and mistreatment of Armenian prisoners of war and civilian captives has served as a vital foundation of international justice and accountability efforts.

Presenting the ANCA-WR’s “Human Rights Champion” Award to Dr. Tatoyan was ANCA-WR Vice Chair Raffi Kassabian Esq., who highlighted the honoree’s tireless pursuit of justice in the face of seemingly insurmountable challenges. “Dr. Tatoyan is the embodiment of courage. When others in government turned a blind eye, Dr. Tatoyan demanded accountability from the perpetrator regime. When others acquiesced to the defeat to the enemy after the 44 day war, Dr. Tatoyan raised alarms in the international community to invoke justice,” Kassabian remarked.

“And when Azerbaijan attempted to sweep its heinous genocidal conduct under the rug, Dr. Tatoyan pointedly engaged in a fact finding mission to expose Azerbaijan for what it is – a modern day genocidal regime,” Kassabian continued.

In his acceptance speech, Dr. Tatoyan reported on Azerbaijan’s recent assault on the Armenian people, highlighting how Azerbaijan’s state-sponsored Armenophobia serves as a driving force behind Azerbaijan’s ongoing aggression against the Armenian people. Dr. Tatoyan also sent a strong message to the Diaspora, thanking the community for its vigilance in advocating for the rights of the people of Armenia – and urging unity in the face of Azerbaijan and Turkey’s efforts to sow artificial divisions between the Armenian people. In thanking the ANCA-WR for hosting him in California, Dr. Tatoyan issued a certificate of recognition to Nora Hovsepian on behalf of the ANCA-WR Board for the organization’s tireless advocacy work. Certificates of recognition were also issued to distinguished legal experts Garo Ghazarian, Esq. and Karnig Kerkonian, Esq. for their critical contributions to holding Turkey and Azerbaijan accountable for the egregious human rights abuses perpetrated against the Armenian people under international law and for their steadfast support and collaboration with of the office of Armenia’s Human Rights Defender.

The ANCA-WR invited California State Senator Anthony Portantino to the stage to report on his recent visit to Armenia and Artsakh as the first U.S. elected official to visit Artsakh after the 2020 war where he met with government officials and visited border communities – witnessing the devastation that has been wrought against the Armenian people by Azerbaijan. Senator Portantino then issued a commendation from the State of California to Dr. Tatoyan for his service to the Armenian nation – which was followed by the presentation of a commendation issued by Supervisor Kathryn Barger on behalf of the Los Angeles County Board of Supervisors, presented by ANCA-WR Vice Chair Raffi Kassabian.

The luncheon concluded with a benediction delivered by His Eminence Archbishop Parkev Martirosyan of Artsakh, representing the Western Diocese of the Armenian Church of North America.

The ANCA-WR Grassroots Luncheon marked the 10th anniversary of the ANCA-WR’s highly successful Grassroots Conference initiative. While COVID-19 precautions forced the cancellation of the highly-anticipated ANCA-WR Gala Banquet, the Grassroots Luncheon exceeded every expectation by offering a uniquely intimate opportunity for long-time friends, supporters, partners and donors of the ANCA-WR to come together in solidarity for the first in-person event hosted by the ANCA-WR in two years.

The Armenian National Committee of America–Western Region is the largest and most influential nonpartisan Armenian American grassroots advocacy organization in the Western United States. Working in coordination with a network of offices, chapters, and supporters throughout the Western United States and affiliated organizations around the country, the ANCA-WR advances the concerns of the Armenian American community on a broad range of issues.