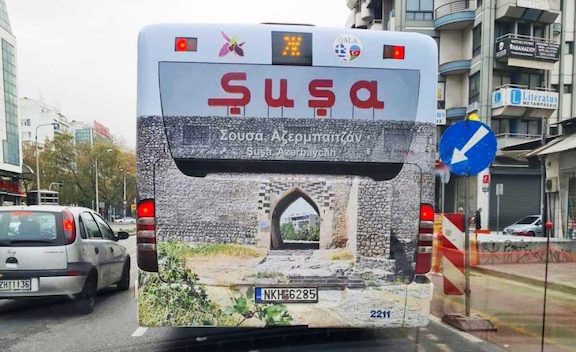 Azerbaijani advertisement on busses in Thessaloniki, Greece were removed for their anti- Armenian messaging

The Armenian National Committee of Greece’s efforts led to the removal of bus advertisements depicting occupied Shushi as part of Azerbaijan.

The bus, wrapped in the Azerbaijani advertisement, was photographed on the streets Thessaloniki and posted on social media site. Several reporters protested the advertisements and urged for them to be removed, reported the Athens-based Azat Or newspaper.

Members of ANC Greece immediately contacted the director public transit services in Thessaloniki, who pledged the removal all such advertisements and take out of circulation the busses that already bear the insulting wrapping. The transit director said that an outside agency has been hired to secure advertisements for the transit agency, adding that transit authorities were unaware of the subject of the ads.

Similar pro-Azerbaijani ads were also place in London and Sydney and thought he efforts of the ANC chapters there, those ads were also removed.

The Greek City Times dubbed the incident “The Bus of Shame,” and reported that Thessaloniki authorities removed them “without hesitation.” “Although the advertisement has been removed, it does bring into question why it was ever allowed to be displayed,” the newspaper added.

“With such provocative efforts Azerbaijan is simply trying to present and perpetuate the results of the use of force as a reality, while we know for sure that the issue of the status of Nagorno Karabakh remains open,” Armenia’s Ambassador to Greece Tigran Mkrtchyan said .

“I consider this act a provocation, especially in a friendly country like Greece, whose authorities have more than once expressed solidarity with the positions of Armenia. With such a provocative step they are trying to put some tension in the Armenian-Greek relations, which, of course, will be a failure,” added the ambassador.