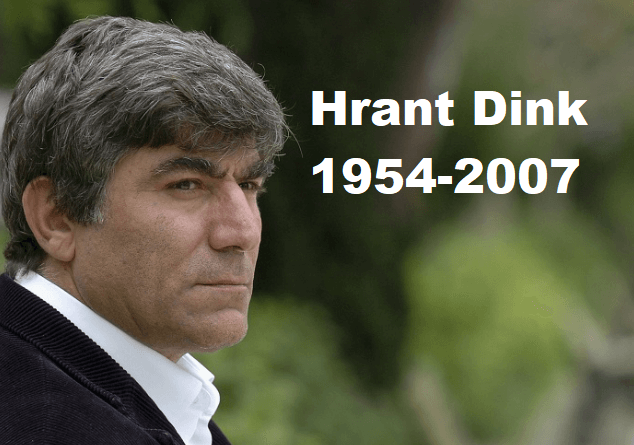 OTTAWA – Today, the Armenian National Committee of Canada (ANCC) honours and remembers the memory and legacy of Hrant Dink, the renowned Turkish-Armenian journalist who was shot dead in front of his newspaper office, on January 19th, 2007, sending shockwaves across the worldwide Armenian diaspora and the global community of journalists and activists.

“Hrant Dink was more than a mere journalist reporting daily news and publishing opinion pieces… he epitomized the values of a tolerant and just society in a country marred by intolerance and injustice” said Hrag Tarakdjian, co-president of the ANCC.

Dink was shot in broad daylight by a young Turkish ultra-nationalist man, who was later praised and glorified, leaving international reactions into the investigation of the crime largely skeptical.

“In the aftermath of his assassination, many hidden political sentiments within Turkish society were surfaced, when hundreds of thousands of Turks marched alongside Armenians, demonstrating their solidarity” said Shahen Mirakian, co-president of the ANCC.

Despite continuous death threats and trumped-up legal charges, Dink dedicated much of his career pressuring the Turkish government to come to terms with its criminal past, while urging the Turkish people to learn the truth about the Armenian Genocide and speak up for it.

“While Hrant Dink’s legacy continues to inspire people to this day, unfortunately the Turkish government has regressed into further authoritarianism, infamous for jailing the highest number of journalists in the world” said Tarakdjian and Mirakian.

“With so many fundamental human rights practically non-existent in Turkey today, Ankara can and should no longer be considered a so-called “NATO ally” that Canada and the rest of the international community can rely on” concluded Tarakdjian and Mirkian.