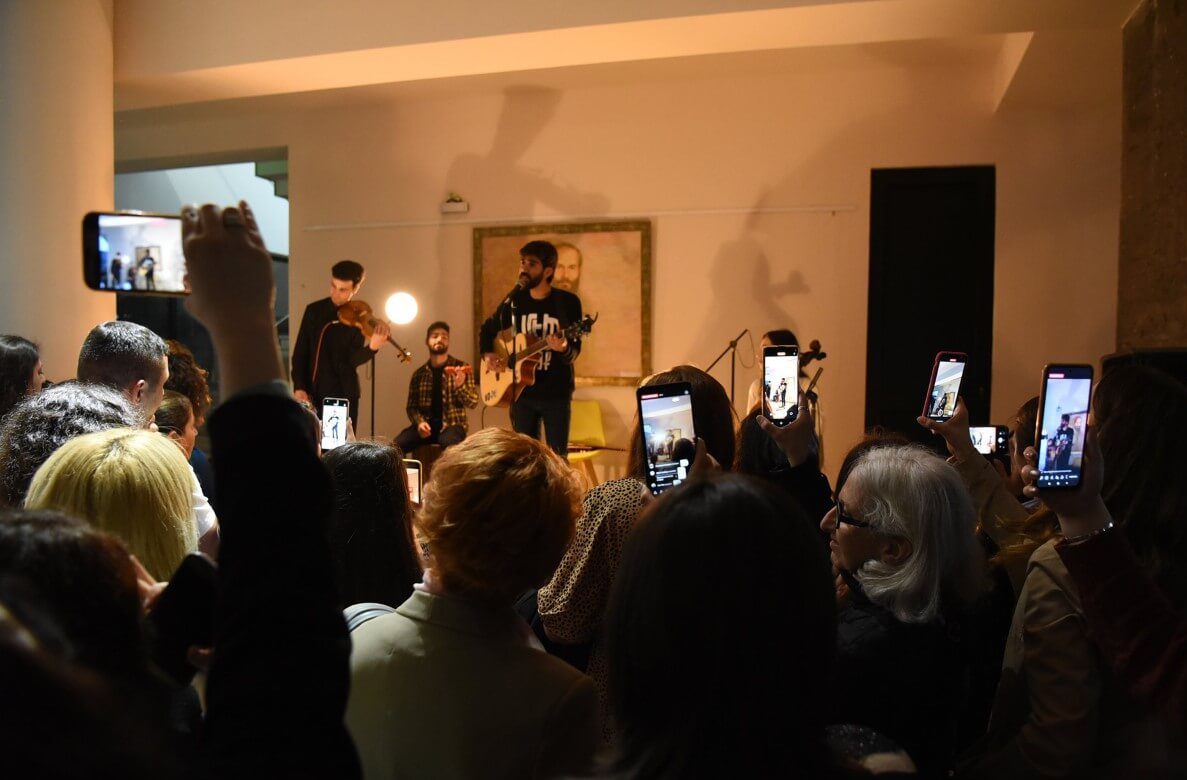 Apo Sahagian and his band kicked off the Tufenkian Foundation’s “Bringing the world to Artsakh” initiative. (Photo: ArtsakhPress/Margarita Petrosyan)

STEPANAKERT (Tufenkian Foundation)—Apo Sahagian and his band kicked off the Tufenkian Foundation’s “Bringing the world to Artsakh” initiative, with shows in Martuni and Stepanakert on May 7 and 8, 2022. Both concerts were free and open to the public.

Last month, the Tufenkian announced the launch of “Bringing the world to Artsakh” (or ‘Yek, ashkharhuh pirink Artsakh’ in the local dialect)—a series of visits by well-known and up-and-coming Armenian personalities from Armenia and the Diaspora to Artsakh. Sahagian’s visit was organized in partnership with the Hamazkayin Armenian Cultural and Educational Society’s Artsakh office, GG Armenia, The Paul Eluard Foundation, and KINI Stepanakert.

On May 7, Sahagian and his band—Ani Panosyan (cello), Gorr Karapetyan (violin), and Dimitri Hovhannisyan (percussion)—mesmerized the crowd at the historic Martuni Culture Palace. Prior to their set, Tufenkian Foundation public relations director Rupen Janbazian and Hamazkayin Artsakh Office director Hermine Avagyan invited attendees to join in a moment of silence in memory of those who were killed during the 2020 Artsakh War before presenting the purpose of the program.

“It shouldn’t come as a surprise that we named the initiative in the Artsakh dialect. It’s also no surprise that we kick off the series of events here in Martuni, a place that is near and dear to our hearts at the Tufenkian Foundation—a region where we carry out a lot of our work,” Janbazian said in his remarks. He and Avagyan then explained that the program’s objective is to engage and motivate the local population, help raise Artsakh’s profile in Armenia and internationally, and encourage visits to Artsakh’s different regions. Apo and his band went on to play a number of folk and original songs for the young, energetic crowd.

The following day, on May 8, Apo and his band played to a crowd of more than 200 guests at the newly built Paul Eluard Francophone Center in Stepanakert. People from Artsakh’s different regions, as well as from Yerevan and other parts of Armenia, enjoyed the nearly two-hour concert, which was livestreamed through the Tufenkian Foundation Facebook page (available at: https://youtu.be/1brKzbgVgJk).

Commenting about the importance of such events, Avagyan noted after the concerts that the people of Artsakh have a real need for these sorts of interactions with Armenians from outside of Artsakh. “These types of public events–whether cultural, literary, academic, or social–are important ways to engage our people. The Hamazkayin Artsakh office has always supported the cultural and educational revitalization of Artsakh, which is why we gladly accepted the Tufenkian Foundation’s request to co-sponsor this first installment of ‘Bringing the world to Artsakh’,” Avagyan commented.

Both shows were attended mainly by local youth, which was most welcome by Sahagian and his band. “The young people are not only the future of Artsakh but also its present. Though these are difficult times for Artsakh, seeing their enthusiasm and energy was inspiring,” Sahagian commented.

Apo and his band also made a surprise stop in Aghavno (also known as Ariavan) village, where they played an impromptu set for the village’s children. Aghavno is situated in the critical Berdsor corridor that connects Armenia to Artsakh. During the 2020 Artsakh war, most of Aghavno’s families were forced to leave their recently built homes. Nine defiant families, however, remained against all odds, determined to protect their homes. Today, the village is home to more than 25 families.

“Bringing the world to Artsakh” is an ongoing program and will feature musical and theater performances, public lectures, roundtable discussions, book presentations, exhibitions, and workshops throughout Artsakh.