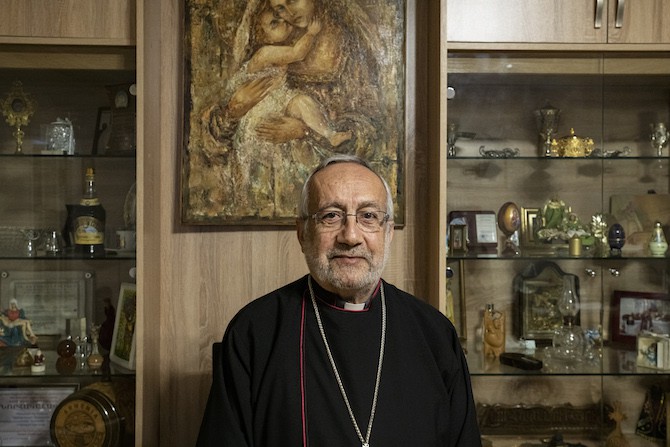 The Patriarch-elect has taken the name of His Beatitude Raphaël Bedros XXI Minassian.

His Beatitude Raphaël Bedros XXI Minassian was born on 24 November 1946 in Beirut. He studied at the Patriarchal Seminary of Bzommar (1958-1967) and at the Pontifical Gregorian University (1967-1973), where he also studied philosophy and theology. He attended a specialisation course in psycho-pedagogy at the Salesian Pontifical University.

On 24 June 1973 he was ordained a priest as a member of the Patriarchal Clergy Institute in Bzommar. From 1973 to 1982 he served as parish priest of the Armenian Cathedral in Beirut, and from 1982 to 1984, secretary to Patriarch Hovannes Bedros XVIII Kasparian. From 1984 to 1989 he was in charge of founding the parish complex of the Holy Cross in Zalka, Beirut.

From 1975 to 1989 he was a judge at the ecclesiastical tribunal of the Armenian Church in Beirut. He taught Armenian liturgy at the Pontifical University of Kaslik from 1985 to 1989, and in 1989 he was transferred to the United States of America, where he worked for a year as a parish priest in New York. Subsequently, until 2003, he was pastor for Armenian Catholics in California, Arizona and Nevada.

Since 2004 he has directed Telepace Armenia, of which he is founder. In 2005 he was appointed as Patriarchal exarch of Jerusalem and Amman for the Armenians. On 24 June 2011 the Holy Father appointed him ordinary for the Armenian Catholic faithful of Eastern Europe, assigning him the titular see of Caesarea in Cappadocia of the Armenians and the title of archbishop ad personam.

From 24 to 26 June 2016, he received Pope Francis during his Apostolic Journey in Armenia.

On Armenian Independence Day, the ANCC Presses Ottawa to Establish an Embassy in Yerevan