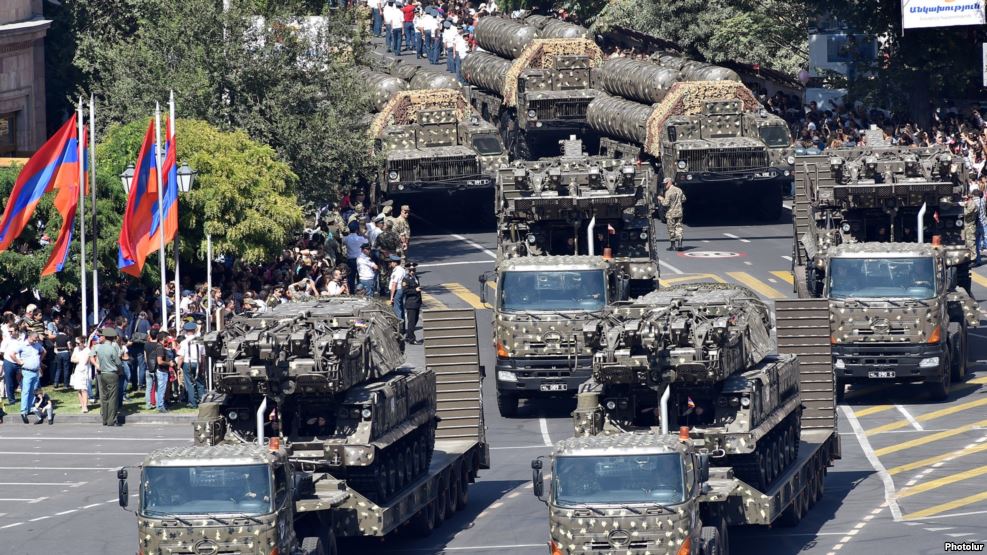 (RFE/RL) — Armenia demonstrated on Wednesday Iskander tactical missiles and other advanced weapons acquired from Russia recently as it marked the 25th anniversary of its independence with a military parade held in Yerevan.
Hundreds of Armenian troops marched through the city’s central Republic Square, followed by columns of tanks mounted on heavy military trucks, armored vehicles, artillery and air-defense systems, and ballistic missiles. They were joined by a company of Russian soldiers from Russia’s military base headquartered in Gyumri.

A dozen MiG-29 fighter jets of the Russian base and Armenian Su-25 attack aircraft roared overhead during the parade watched by Armenia’s political and military leadership.

The participating troops also included soldiers of an Armenian peacekeeping brigade. They carried the national flags of the United States, Germany, Italy, Poland and Greece symbolizing the brigade’s past and present involvement in multinational contingents led by those NATO member states.

President Serzh Sarkisian praised the Armenian military as he addressed the troops lined up at the sprawling square. “We have the power to defend our freedom and our rights,” he said. “This parade bears testimony to that.”

“During the course of the past 25 years we have achieved irreversible successes,” added Sarkisian. “Sometimes we made mistakes and sometimes we went to extremes, but by and large we have followed the right path.”

The Armenian military used the occasion to put on display several Russian-made weapons that appear to have been supplied to it this year. The most important of them are Iskander missiles that have a firing range of up to 300 kilometers and are known for their precision. A public announcer commentating on the parade said Armenia can use them to destroy “strategic facilities” of its enemies.

In particular, the sophisticated missiles developed in the 1990s and first acquired by Russia’s armed forces in 2006 should make Azerbaijan’s vital oil and gas installations more vulnerable to Armenian missile strikes.
Yerevan has made no secret of its readiness to launch such strikes in the event of a full-scale war for Nagorno-Karabakh. Its ballistic missile arsenal until now included only Soviet-era Scud-B and Tochka-U systems, which were also demonstrated during the parade.

Iskander is thought to be capable of overcoming just about every missile defense shield currently existing in the world. Armenia is the first country other than Russia which is known to have obtained such missiles.

The parade featured Smerch rockets as well, suggesting that Armenian army got hold of them earlier this year.

Among other newly acquired weaponry demonstrated at the Armenian parade were modernized variants of the Buk medium-range air-defense system and Infauna electronic warfare vehicles that use advanced technology to jam enemy communications.