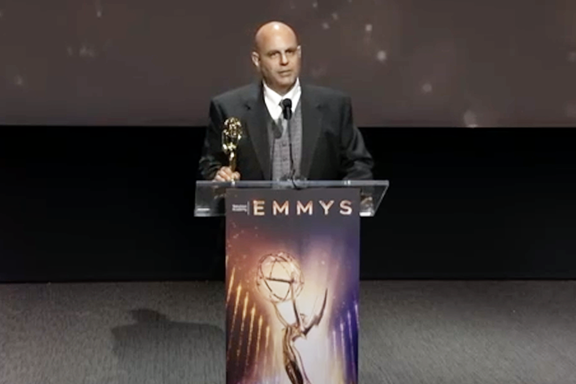 The 52-minute documentary, “Holocaust Soliloquy,” ran on Los Angeles PBS station KLCS in May 2018, winning the Emmy in the Independent Programming Category.

Musurlian won his first Emmy in 2012, for a 30-minute (solo) documentary, Burbank’s African Sister City, which he shot, wrote, narrated, and edited. In 2016, Musurlian, and a team from The Burbank Channel, won Emmys for their various roles in the production of the Mayor’s State-of-the-City video.

Musurlian, who was born in Wisconsin and raised in Torrance, received his bachelor’s degree from USC, and master’s degrees from Baylor University, American University, and the University of Redlands. He has had 10 Emmy nominations since 2002 and has won 24 Golden Mikes from the Radio & Television News Association of Southern California.

Growing up, Musurlian attended St. James Armenian Apostolic Church. In 1983, he interned at ABC News in Washington, D.C., as part of the Armenian Assembly Intern Program. From 2006 to 2009, he sat on the Board of Directors of the Armenian National Committee of America, Western Region.

Among more than 20 Armenian-themed projects Musurlian has produced over the last 20 years are: The Long Journey from the NFL to Armenia (2006), Historic Armenia (2015), and The 100-Year-Old Survivor (2015), which all ran on KLCS in Los Angeles