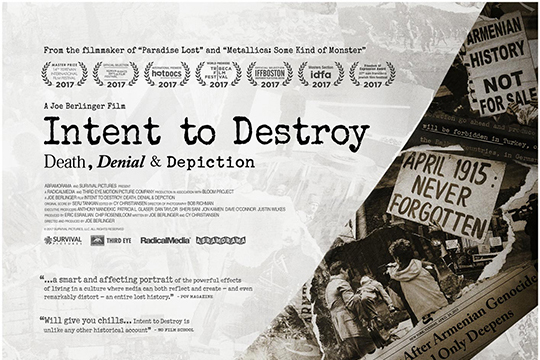 DOC LA also gave out a number of other awards as well. Another standout film was Sebastien Paquet’s Mind Over Matter which won Best Screenwriting, Best Cinematography and took home the Audience Award. The documentary is about a man born with Cerebral Palsy who overcame his disability through sheer will to form a successful rock band. The film produced by Nate Adams was received with standing ovations.

Marion Cotillard’s environmental documentary The Girl and the Typhoons received the Best Environmental Film Award and the Parajanov-Vartanov Institute Award (whose past recipients include Martin Scorsese and Emma Thompson). The film documents the attempts of a young survivor to raise awareness about the aftermath of the typhoon disasters in her native Philippines.

Narrated by Cotillard and directed by Christoph Schwaiger, the documentary had it’s Los Angeles premiere at DOC LA.

Thee Alfred Molina-narrated Erdogan: The Dictator’s Republic by Ryan & Joe Heilman had its world premiere at the festival, and received DOC LA Freedom Award and DOC LA Storyteller Award.  The documentary by Inga Bremer was recognized with DOC LA Founder’s Award. Virginie Ledoyen was recognized for her role in David Koch’s “Witnesses” which is about the current conflict in dictator Bashar al-Assad’s Syria.

Ladies First by Uraaz Bahl, an inspirational survival story of Deepika Kumari, who was born on the roadside to abject poverty and at 16 become the number one archer in the world, won Best Short Documentary Award.

Grab and Run by Roser Corella about bride abduction epidemic in Kazakhstan received the Best International Documentary Award. He She I by Carlotta Kittel, the first feature length student film ever at DOC LA won the Best Student Film – Gold, while Sisterly by Nina Vallado, about finding deeper connection and friendship with her autistic sister, and Melissa Ferrari’s experimental animation Phototaxis, won Silver and Bronze, respectively.

Historic Maps of Armenia on Display at Latvian National Library