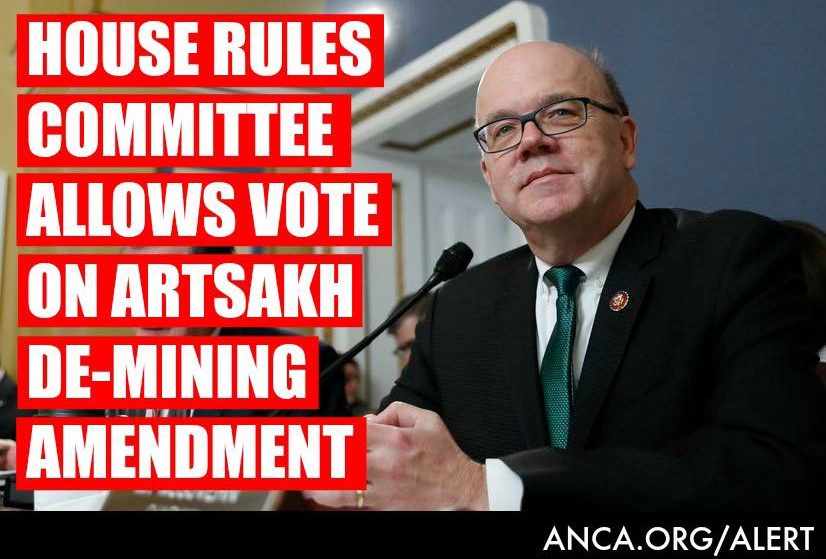 The U.S. House Rules Committee, led by Chairman Jim McGovern (D-MA) cleared the path for a full House vote on an amendment to continue U.S. funding for Artsakh de-mining.

WASHINGTON- The U.S. House Rules Committee – under the leadership of Chairman Jim McGovern – has cleared the way for the ANCA-backed Speier-Cox-Bilirakis-Krishnamoorthi Amendment #49 appropriating funds for humanitarian de-mining in Artsakh (Nagorno Karabakh).

The Rules Committee ruled “out of order” the ANCA-opposed Cohen Amendment #69, which sought to block any U.S. funding for humanitarian de-mining in Artsakh. A similarly hostile amendment, offered by Rep. Henry Cuellar, was withdrawn earlier today. The panel also ruled out of order the ANCA-backed Speier-Sherman-Costa Amendment #50 increases U.S. aid to Armenia by $20 million.

We want to thank Chairman McGovern for ensuring that the full U.S. House has the opportunity to show support for Artsakh and all Armenians in the wake of the deadliest Azerbaijani attack in years,” said Aram Hamparian, Executive Director of the ANCA. “Our community is deeply grateful for the leadership of Congresswoman Jackie Speier, TJ Cox, Gus Bilirakis, Raja Krishnamoorthis, Brad Sherman, Devin Nunes, Jim Costa and all those who are working so hard for peace.”