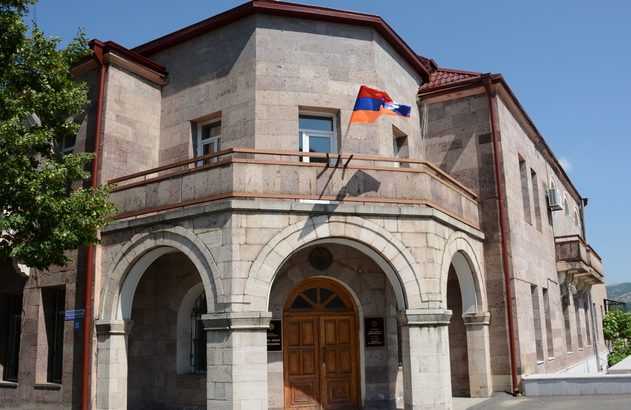 In a blatant disrespect for the continuous efforts to find a lasting solution to the Azerbaijan-Karabakh conflict, President Ilham Aliyev of Azerbaijan, accompanied by his wife and Vice President of Azerbaijan, Mehriban Aliyeva and other high-ranking state officials, visited the occupied Hadrut region of the Republic of Artsakh, and, by doing so, reaffirmed Baku’s militaristic and outright provocative position which was further reinforced by accompanying inflammatory and warmongering remarks,  Artsakh’s Foreign Ministry said in a statement.

“Such official visits and fueling of anti-Armenian sentiments are nothing but Azerbaijan’s targeted attempts to reinforce the situation that emerged as a result of the war and are utterly unacceptable,” the Ministry said.

“The Armenian side has alerted the international community on numerous occasions of the cultural terrorism carried out by Azerbaijan manifested in its state-orchestrated attempts of erasing Armenian cultural heritage in territories that are under its military occupation further advancing its genocidal expansionist policy. In a culmination of this despicable policy, President Aliyev personally instructed accompanying officials to have medieval Armenian inscriptions removed from the walls of churches and monuments in the occupied territories,” the statement reads.

According to the Foreign Ministry, “this genocidal policy is a crime against humanity, a gross violation of international norms, conventions, resolutions and agreements, and is a threat to the entire civilized world.”

The Ministry calls on the relevant international organizations to take all the necessary measures to prevent the eradication of the Armenian cultural heritage.

“When Women Succeed, We All Prosper”