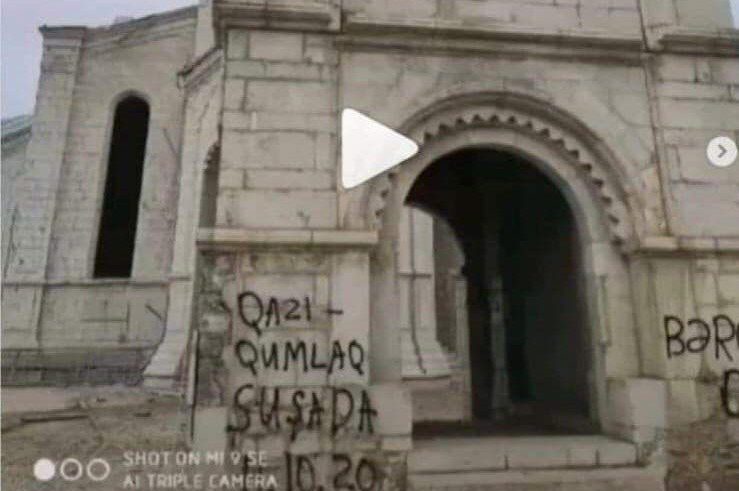 The Ghazanchetsots Church in Shushi was vandalized by occupying Azerbaijanis

(Asbarez)- Azerbaijani is delaying its approval for a UNESCO mission to Artsakh to assess damage to cultural and religious sites. According to the United Nations-affiliated organization. The authorities of Azerbaijan have been approached several times without success so far, reported the organization on Sunday.

UNESCO, the United Nations Educational, Scientific and Cultural Organization, reiterated countries’ obligation to protect cultural heritage in terms of the 1954 Convention for the Protection of cultural property in the event of armed conflict to which both Armenia and Azerbaijan are parties.

The Organization proposed to carry out an independent mission of experts to draw a preliminary inventory of significant cultural properties as a first step towards the effective safeguarding of the region’s heritage.

The proposal received the full support of the Co-Chairs of the Minsk Group and the agreement in principle of the representatives of both Armenia and Azerbaijan.

Meeting at UNESCO on December 10 and 11, the members of the intergovernmental Committee of The Hague Convention of 1954 for the Protection of Cultural Property in the Event of Armed Conflict and its Second Protocol (1999), welcomed this initiative and confirmed the need for a mission to take stock of the situation regarding cultural properties in and around Nagorno-Karabakh. The Committee requested each of the parties to render the mission possible.

Since November 20, UNESCO has made proposals and led in-depth consultations with a view to organizing the mission which, in the terms of the Convention, requires the agreement of both parties.

Ernesto Ottone, Assistant UNESCO Director-General for Cultural, said: “Only the response of Azerbaijan is still awaited for UNESCO to proceed with the sending of a mission to the field. The authorities of Azerbaijan have been approached several times without success so far.

Every passing week makes the assessment of the situation concerning cultural property more difficult, not least due to the weather which is expected to become harsher in the coming weeks. The window of opportunity that was opened by the cease fire must not be closed again. The safeguarding of heritage is an important condition for the establishment of lasting peace. We are therefore expecting Baku to respond without delay so that the constructive discussions held over recent weeks can be turned into action.” Reads the statement issued by the UNESCO.