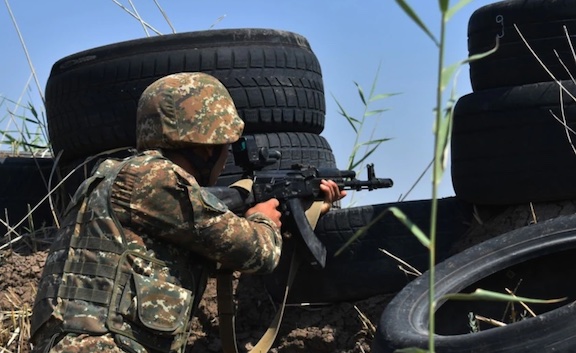 Azerbaijani forces launched a massive attack on Armenia’s eastern border in the Syunik Province on Tuesday in an attempt to breach Armenia’s sovereign territory. Armenia’s Defense Ministry announced that a ceasefire went into effect through the mediation of Russia.

While unconfirmed reports placed the number of fatal casualties at 15, the defense ministry initially confirmed only one death. “As a result of fighting which started when Azerbaijani armed forces attacked Armenian positions, there are killed and wounded Armenian soldiers, with information on further casualties still being checked. The loss of two combat positions is also confirmed,” the defense ministry said in a statement. It added that the countermeasures of the Armenian military inflicted heavy personnel and materiel losses upon the Azerbaijani forces.

The ministry also said that 12 Armenian soldiers, including seven contract servicemen, were captured by Azerbaijan. Official Baku confirmed that they had disarmed and taken Armenian soldiers prisoner, but did not specify the number, according to azatutyun.am.

“This attack is a continuation of the consistent policy of the Azerbaijani side to occupy the territories of the Republic of Armenia, which began on May 12, 2021 with the infiltration of the Azerbaijani armed forces into the Syunik and Gegharkunik regions,” said Armenia’s Foreign Ministry in a statement, adding that according to the United Nations Charter, Armenia has the right to “repel the use of force against its territorial integrity and sovereignty by all means.”

“We call on the international community and our international partners – Russia, CSTO, OSCE Minsk Group Co-Chairmanship and Co-Chair countries – to express a clear and targeted response to these actions of the Azerbaijani side, which undermine regional peace and security, and undertake effective steps aimed at its prevention as well as unconditional and complete withdrawal of the Azerbaijani armed forces from the territory of the Republic of Armenia,” the foreign ministry said.

Armenia’s National Security chief Armen Grigoryan told Armenia’s Public Television that Yerevan has officially appealed to Russia to protect its territorial integrity in the wake of these fresh attacks by Azerbaijan.

Armenia’s newly-appointed defense minister Suren Papikyan held a phone conversation with his Russian counterpart Sergey Shoygu on Tusday night local time. Papikyan’s office reported that Shoygu expressed readiness to make every effort to end hostilities, return prisoners of war, and resolve the situation. Papikyan reportedly emphasized to Shoygu that Azerbaijan’s incursion into the sovereign territory of Armenia is a gross violation of the provisions of the November 9, 2020 trilateral declaration, which endangers the entire negotiation process.

Grigoryan also briefed ambassadors of the United States and Iran in Yerevan, expressing Armenia’s position that Azerbaijani forces withdraw to their positions prior to May 12, when Baku ordered a breach of Armenia’s sovereign borders in the Syunik and Gegharkunik provinces.

Leaders of the European Union and the OSCE called on Armenia and Azerbaijan to end the border clashes.

Calling for “urgent de-escalation and full ceasefire,” Charles Michel, President of the European Council, described the situation in the region as “challenging.” “The EU is committed to work with partners to overcome tensions for a prosperous and stable South Caucasus,” Michel wrote on Twitter.

The president of the European Council also said that he had discussions with the leaders of Azerbaijan and Armenia “in light of today’s developments.”

In a conversation with Michel, Prime Minister Nikol Pashinyan told the European leader that the international community should not remain indifferent to Azerbaijan’s encroachments on Armenia’s sovereign territory.

Sweden’s Foreign Minister Ann Linde, who is the current OSCE Chairperson-in-Office, expressed her full support for the Minsk Group Co-Chairs, who issued a statement over the Armenian-Azerbaijani border tensions and the situation in Nagorno-Karabakh.

During a telephone conversation between the presidents of Russia and Iran, Vladimir Putin, and Ebrahim Raisi, the sides were firm on maintaining the current geopolitical order in the region. “Any change in the geopolitical situation and the borders of the countries of the region is unacceptable,” the sides said, according to the Iranian president’s press office.