Azerbaijan Sets Over 4,000 Acres of Artsakh Forests on Fire

(Asbarez)- In addition to targeting the civilian centers and population in Artsakh, the Azerbaijani armed forces, specifically in that past few days, have been deliberately burning Artsakh’s forests, said Artsakh Human Right Defender’s office, which added that Azerbaijan has been using white phosphorous to set the fires.

A fact-finding mission headed by Artsakh’s Human Rights Defender Artak Beglaryan released that the deliberate fires set by Azerbaijan have already burned more than 1,815 hectares (more than 4.400 acres) of forest across Artsakh. He warned that the fires, which can spread fairly rapidly, continue to burn.

”The State Service of the Emergency Situations of Artsakh is taking steps to extinguish the fires where applicable,” said a statement by the state body. “But a crisis remains imminent.”

“With this, the enemy is trying to create an environmental crisis, in addition to the humanitarian one it has already perpetrated,” added the statement by Artsakh’s Emergency Situations Service,

“Given the size and geographic stretch of the burned forests, the population of Artsakh is facing an ecological disaster, which undermines the environmental security in the region and can have long-term dangerous consequences for the life and health of the people of Artsakh. Moreover, the Azerbaijani armed forces, with these criminal methods, intend to harm the civilian population sheltered in the forests,” warned Beglaryan. 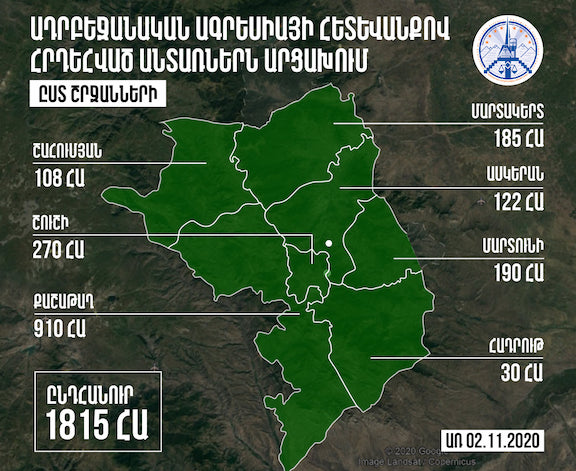 The Ombudsman emphasized that the deliberate burning of the forests by the Azerbaijani armed forces is a war crime, and called on the international community to take practical steps to condemn Azerbaijan and apply punitive measures.

“We strongly and resolutely condemn the continued employment by Azerbaijan of prohibited means and methods of warfare under international law in the course of armed aggression waged against the Republic of Artsakh beginning on September,” said a statement by Artsakh’s foreign ministry on Monday.

“Specifically, the Azerbaijani armed forces, in addition to using cluster munitions, have begun deploying phosphorus-containing incendiary ammunition in wooded areas close to the areas of the Republic of Artsakh, where some civilians from nearby villages have been temporarily seeking shelter,” the ministry said.

Official Stepanakert waned that “terror tactics” used by Azerbaijan are aimed to exterminate Artsakh’s population and urged the international community to recognize Artsakh’s independence, utilizing mechanisms adopted by the U.N. and other international bodies to salvage a threatened population.

“First of all, in this context, it is necessary to consider the consistent refusal of the Azerbaijani side to observe the humanitarian truce, since the continuation of hostilities allows the Baku authorities to further terrorize the civilian population of Artsakh. It is for this purposes that the Azerbaijani side resorts to the use of prohibited weapons, deliberate attacks on the civilian population and civilian objects, including medical units, setting itself the main task of exterminating and forcibly deporting the entire population of Artsakh,” the ministry says.

“Thirty years ago, the people of Artsakh chose the path of independence as a means to protection themselves against Azerbaijan’s deliberate policy of exterminating the Armenian population. We are convinced, that under these circumstances whereby official Baku is attempting to complete its criminal plan, international recognition of the de facto independence of the Republic of Artsakh would an urgent and proper steps by the international community to fulfill its generally accepted obligations to prevent crimes against humanity,” the Artsakh foreign ministry said in its statement.

Italian City of Palermo Recognizes the Independence of Artsakh