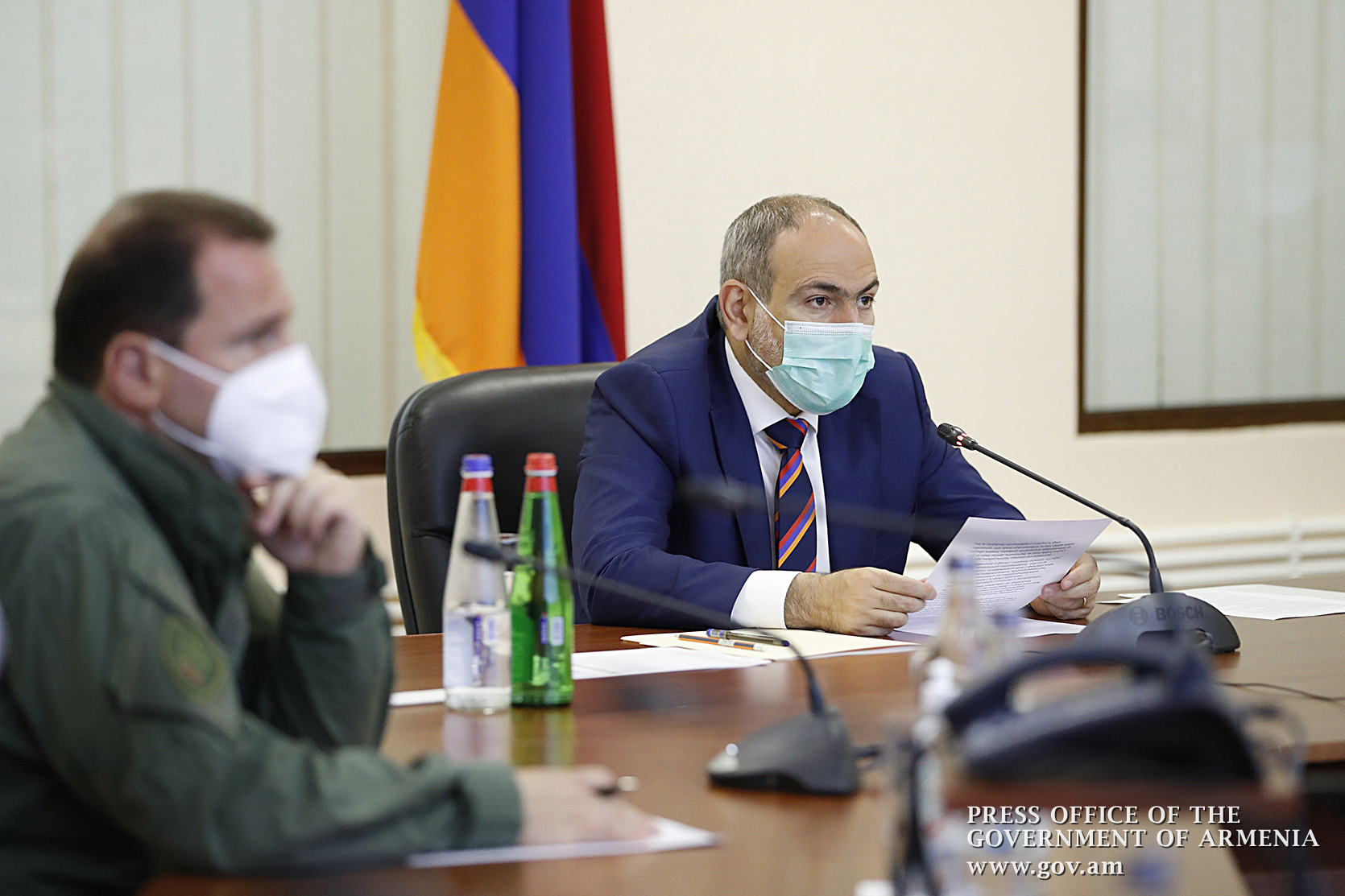 Prime Minister Nikol Pashinyan during the meeting with the leadership of the Ministry of Defense and Armed Forces, July 18, 2020

Addressing the meeting, PM Pashinyan said the purpose of the meeting was to discuss the operative situation on the Armenia-Azerbaijan border. Before that, he noted that the military-political situation in the region has become tense due to Azerbaijan’s aggression against the sovereign territory of the Republic of Armenia.

The Prime Minister reminded that last Sunday, July 12th, the Azerbaijani armed forces launched an attack to occupy the “Anvakh” border position of the Armenian Armed Forces. “For a full understanding of the situation, it should be noted that this position is located on our side of the border, in the sovereign territory of the Republic of Armenia, and Azerbaijan’s actions can only be described as aggression,” he said.

At the same time, he noted, the Azerbaijani armed forces targeted the villages of Movses, Aygepar, Chinari, Nerkin Karmiraghbyur in the Tavush region with artillery fire and drones, causing significant damage to civilian infrastructure and homes.

“We have evidence – factual data – that the Azerbaijani armed forces deployed artillery and armoured vehicles between the houses and in the yards of the village of Aghdam in front of Chinari. It was from there that our villages were targeted in order to present our retaliatory actions as an attack the civilian population,” Pashinyan stated.

“It is very important to emphasize the meaning and context of the events that are taking place because the offensive actions of the Azerbaijani Armed Forces must have an explanation; therefore, it is important to answer the following question: What does the military-political leadership of Azerbaijan want to do and why?” he added.

In recent months, the Prime Minister said, Azerbaijani President Ilham Aliyev’s long-standing military rhetoric has intensified. He is threatening to solve the Karabakh conflict by force more aggressively, openly demonstrating his intention to abort the talks within the framework of the OSCE Minsk Group chairmanship.

“Against this background, he was developing the thesis about the strength and invincibility of the Azerbaijani army, trying to justify the failure to direct the billions of dollars spent under the pretext of the development of the army to the welfare of the Azerbaijani people over the past one and half years,” Pashinyan noted.

“The military-political leadership of Azerbaijan has repeatedly stated that it is waiting for an order from Ilham Aliyev to resolve the Karabakh conflict by military means. This continuous rhetoric had to get some expression. Naturally, against the background of the aggressive statements of the military-political leadership of Azerbaijan, the vigilance and attention of the  Artsakh Defense Army should have been doubled.  Therefore, Azerbaijan decided to strike in the direction we least expected,” he added.

According to the Prime Minister “there was one goal: to materialize the myth of the invincibility of the Azerbaijani army with an unexpected blow, to crush the moral and psychological positions of the Armenian side with military success, and to attack the Republic of Artsakh in that situation.”

“The Armed Forces of the Republic of Armenia, however, showed an exceptionally high level of combat readiness, not only ensuring the inviolability of Armenia’s borders but also shattering the myth built by the incumbent President of Azerbaijan for a decade and a half about the combat effectiveness of the Azerbaijani army,” he stressed.

At the same time, he added, with these actions, Azerbaijan caused significant damage to the countries, which it has extensive military-technical cooperation with because during this last week our Armed Forces have damaged weapons, which are considered invulnerable all over the world.

“The biggest surprise in this story, however, is the contemptuous attitude of the military-political leadership of Azerbaijan towards the lives of its own soldiers, who are being sent to predictable death even when the task set before them is clearly unachievable,” he added.

“The provocation is undertaken by the military-political leadership of Azerbaijan also has a much broader geopolitical context. The Azerbaijani propaganda, in an attempt to cover up its own failure, has begun to develop a thesis that the Armenian armed forces are positioned to disrupt and destroy the international energy infrastructures originating in Azerbaijan. This is done to present Armenia as a global threat,” Nikol Pashinyan continued.

“But the most important proof of the absurdity of this idea is that Armenia theoretically had the opportunity to take such an action even before the events of last week. But it has never had such a goal; it has never been on our political agenda, we never sought to create economic, political, military-political or security instabilities in the region and in the world,” he stated.

“Our task is to ensure our sovereignty, our borders, the security of our country and people, and to promote global security. It has become clear in recent days that Azerbaijan poses a threat not only to Armenia but also to global security. An Azerbaijani official stated a few days ago that their country could launch a missile attack on Metsamor nuclear power plant,” Pashinyan added.

He stressed that Armenia is capable of ensuring its own security, including the Metsamor nuclear power plant, but this is a statement that should be unequivocally considered a crime against humanity, because such an action is a threat to commit terrorism against humanity, it should be given an appropriate international response and probe.”

As for the next steps, the Prime Minister said “we must all get out of the vicious cycle of mere statements about ceasefire violations: an international system of reliable ceasefire monitoring needs to be established.”

“And next, the negotiations held in the OSCE Minsk Group co-chairing format should be continued, and Azerbaijan should finally adopt a constructive position,” he added.

And finally, PM Pashinyan expressed his satisfaction with the high efficiency of the Armenian Armed Forces and stated that the Government’s army development policy, including the development of the military-industrial complex, has fully justified itself. There is no doubt that we will continue along this line. As I have said on many occasions, the development of our armed forces is not a priority for us, but the priority of priorities.”

“And I would like to address a crucial issue that we have raised in this context, that is, the return to the state of ill-earned money obtained through corruption, and the investment of that money for the development of Armenia’s Armed Forces. This objective has not been met in full as of yet. But we will be consistent on this way: specific legal mechanisms have already been established to that effect, which will come into force in the near future,” he concluded.