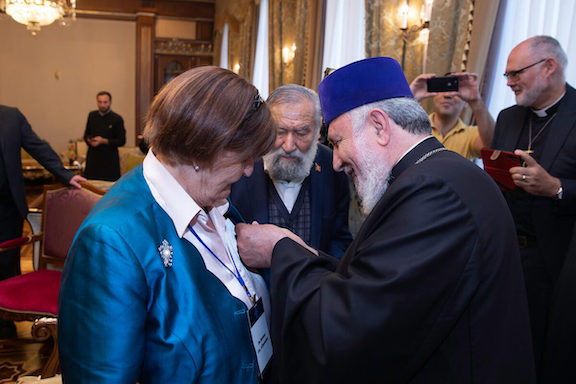 (Asbarez)- His Holiness Karekin II, Catholicos of All Armenians on Friday awarded Caroline Cox, a member of the British House of Lords and a staunch advocate for the rights of the people of Armenia and Artsakh the “Sourp Sahag-Mesrop” medal, the Etchmiadzin press office reported.

Baroness Cox, who is in Armenia to take part in the International Religious Freedom and Peace conference organized by Karekin II.

Cox met with the Catholicos at the Holy See, where he highlighted the Baroness’ decades of support and her advocacy in international circles for the rights of the people of Artsakh, often shedding a light on the atrocities committed by Azerbaijan against the Armenians.

Baroness Cox has been on the ground in Artsakh since the early 1990s, documents such events as the Maragha Massacre carried out by Azerbaijani forces, which annihilate an entire village in Artsakh during the Artsakh Liberation War. She has established the Cox Rehabilitation Center in Stepanakert, offering much needed assistance to children with disabilities and wounded soldiers from the frontlines.

After receiving the medal, Baroness Cox thanked the Catholicos, assuring him that she will continue her advocacy on behalf of the Armenian people and alert and inform international bodies about the atrocities committed by Azerbaijan against the Armenians of Artsakh and the desecration of Armenian cultural and religious monuments.