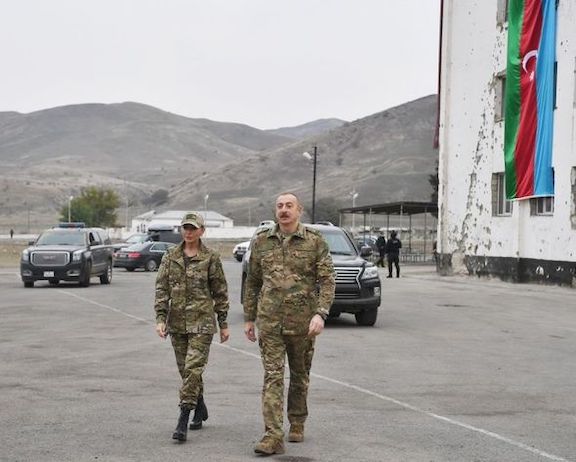 Azerbaijan’s President Ilham Aliyev and his wife, Mehriban Aliyeva who is also the country’s vice-president visit Fizuli on Nov 16

Says No Special Status for Karabakh as There ‘A Single Azerbaijan’

Aliyev made the statements a day after he and his wife, Mehriban Aliyeva, the country’s vice-president, visited Fizuli and Jebrail, which fell into Azerbaijani control during the 45-day war, which Azerbaijani forces fought with the help of Turkey’s military and Ankara-backed jihadist terrorists.

“We restored our territorial integrity, drove the occupiers from the occupied territories, did not allow the creation of a second Armenian state, there can be no question of any status. There is a single state of Azerbaijan,” Aliyev said in the nationally televised address, claiming that Armenian and Azerbaijani can co-exist in his version of Azerbaijan.

“Our destroyed cities and villages are living witnesses to the Armenian fascism,” Aliyev said in a Twitter post on Tuesday. “The entire world must witness the Armenian savagery and should not remain silent.”

He also announced that one of the major projects that his administration will undertake in the construction of a highway between Fizuli and Shushi.

Aliyev said that after all the assessments are done, his government plans to make Armenia pay for what he called “30 years of destruction,” saying Baku will appeal to international judicial bodies to retrieve damages.