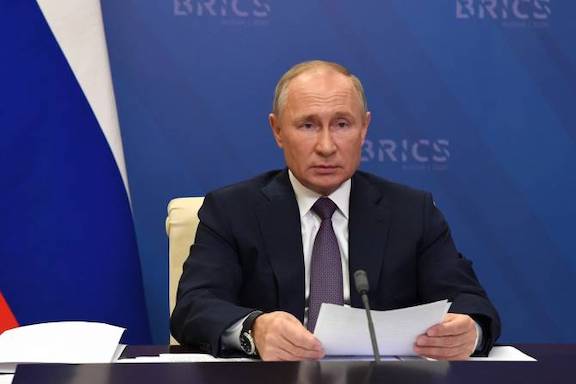 Armenia’s recognition of Artsakh could have “significantly influenced” the course of the conflict throughout the years, said Russian President Vladimir Putin on Tuesday, citing Russia’s recognition of Abkhazia, South Ossetia, and Crimea as examples of how his country has handled people’s right to self-determination.

Answering reporters’ questions a week after he, along with Azerbaijan’s President Ilham Aliyev and Prime Minister Nikol Pashinyan signed an agreement that ended the war in Karabakh, but brought forth more complex complications as Armenia was forced to surrender territory to Azerbaijan, including Shushi. The agreement also did not stipulate a specific solution to the issue of Artsakh’s status—a key element of the conflict settlement negotiations during the past almost three decades.

Putin explained that the issue of returning Shushi to Azerbaijan was never part of the Karabakh settlement process and it emerged during the negotiations to end the current war and never before.

On Monday, Pashinyan told Parliament that the surrender of Shushi had been part of the Karabakh settlement talks since 2016 when negotiations resumed after the April War.

The Russian president also added that weeks before the final agreement was signed, Armenia rejected a proposal whereby Shushi would remain under Armenian control but Azerbaijanis who were displaced after the liberation of the city in 1992 would be allowed to return and settle there.

Putin said he did not understand why Pashinyan rejected the condition for the return of displaced persons to Shushi.

“What surprised me was the position of our Armenian allies who didn’t accept this. Prime Minister Pashinyan directly told me that this posed a threat to Armenia and Nagorno-Karabakh. I still don’t understand what the threat was, taking into consideration the presence of Russian peacekeepers. Pashinyan told me that the Armenian party would fight,” Putin explained.

In discussing the status of Karabakh, Putin said that the parties have agreed that the current status quo would be maintained with the matter being revisited in the future.

“What will happen next is to be decided in the future or by future leaders, future participants in this process. But, in my opinion, if conditions are created for a normal life, for the restoration of relations between Armenia and Azerbaijan, between people, especially in the conflict zone, then this will create conditions for determining the status of Karabakh,” said Putin.

At this point the Russian president reflected on when Artsakh declared independence in 1991, acknowledging that since the 1994 ceasefire agreement Karabakh has functioned as such. He pointed out, however, that no other country, including Armenia, has recognized Karabakh’s independence, which he said: “without a doubt, was a significant factor, including during the course of the conflict because the very fact of Karabakh was not recognized, including by Armenia, left a significant imprint on the course of events and on the perception.”

Putin, once again, reflected back on the Azerbaijani-perpetrated pogroms against Armenians beginning in Sumgait in 1988.

“In order to understand what is happening, we still have to go back to history, literally in a nutshell. I have to remind you that all this began back in 1988 when ethnic clashes broke out in the Azerbaijani city of Sumgait. Then the civilian population, the Armenians, suffered, then these acts spread to Nagorno-Karabakh,” said Putin.

“Since the then leadership of the Soviet Union did not react properly to the events taking place… I repeat once again: these are subtle things. I do not want to take sides and say who is right and who is to blame… It is impossible to say that now, but it was necessary to put things in order, it was necessary to protect the people, the civilian population. This was not done,” explained Putin.