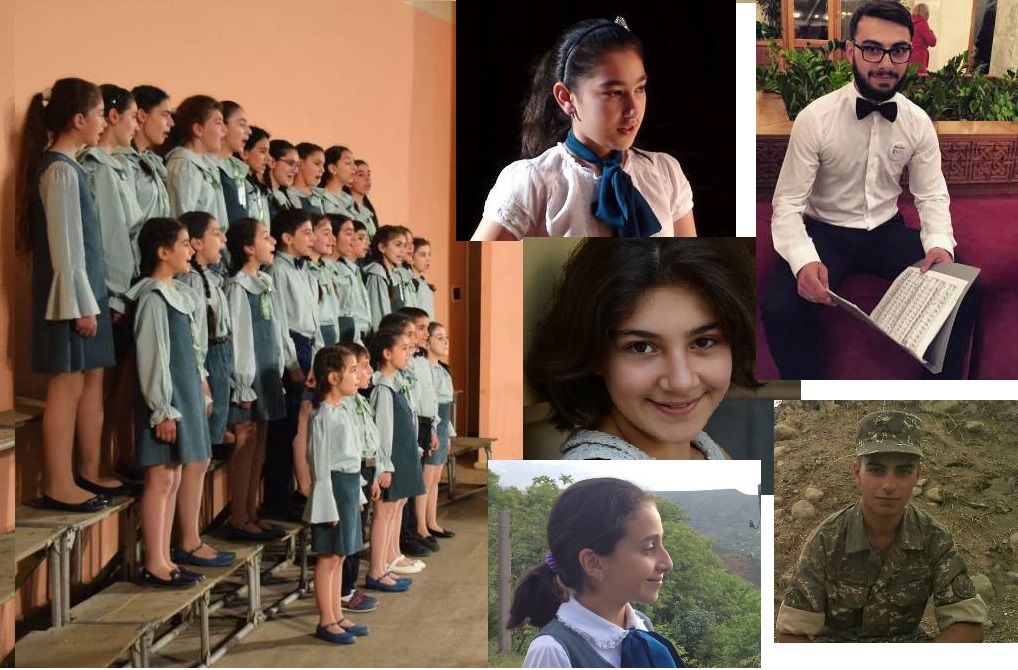 This coming June 7th in Montreal and June 9th in Toronto, two stunning artists, Hasmik Papian (Vienna) and Aline Kutan (Montreal) will be performing for a cause that they consider to be of great importance for Armenia. A cause that has been the mission of the Atken Armenian Foundation since the passing of its namesake, Dr. Atken Armenian.

Indeed, the Atken Armenian Foundation has been discovering, serving, and guiding young music talent in the regions of Armenia for the past 10 years. Their work in poverty reduction is growing rapidly through new initiatives and collaboration. In the last few years their efforts have proven to be very productive; more funds (thanks to fundraising concerts held in Canada) have correlated to greater results. For example, from the first group of students discovered in remote areas of Armenia (by remote they mean even villages high up in the mountains), six AAF Fellows have been accepted into top music schools in Armenia and are on the path they have dreamt about. On the regional development side, in a few short years, their agro-modernization projects will bring in six-figure revenue to local farming communities.

Today we will explore the cultural side of things. It is not an exaggeration to say that the Atken Armenian Foundation has established itself as an important cultural force for young people in remote areas of Armenia. When you meet a AAF Fellow, you will meet a child from a village who only a couple of years ago had never heard of Scarlatti or Brahms and today is singing in Italian and German! You will get to know a young man who served on the border and witnessed his comrade killed by an enemy bullet during the Four-Day War in April 2016, who today is a top voice student at the Komitas Conservatory. Other AAF Fellows are already winning competitions from Armenia to Italy.

At the AAF, every amount raised goes to discovering highly talented youth and to provide them with the best possible quality music training. No donations are used for the administration of the Foundation. They have an excellent network of volunteers in Armenia who make it all possible. From Canadian-Armenians who live there for a few months a year, to local NGO’s, and their representative in Armenia, Mrs. Chaghig Arzrouni, the Registrar at the American University of Armenia.

The Foundation Board includes internationally renowned Montreal musicians such as soprano Aline Kutan and conductors Agnes Grossmann and Raffi Armenian, as well as British violinist Levon Chilingirian. Their president is the son of the late Atken Armenian, Montreal-based violinist Van Armenian, who invests countless hours in the Foundation’s work. The teachers they hire in Armenia are chosen for their exceptional level of professionalism and dedication to the children. Their programs are transforming entire communities and giving hope to their children.

An example of this transformation is when they met Maro Simonyan eight years ago, and found an energetic and determined woman who wanted to bring musical culture to the children of her hometown of Yegheknadzor. The AAF gave her a mission: build a serious children’s choir and head for the top! For the past 4 years, the Armenian Children’s Choir has been winning top prizes in Armenia and even a Gold Medal in Georgia. There is a magical atmosphere when you enter the Culture Centre; Maro has created a place where the love of music is palpable. Every time the award-winning choir shows up in the capital Yerevan, heads are turned!

The AAF does not allow talented and hard-working children to be forgotten due to circumstances of the country. “We will support them as long as they continue to elevate themselves to the enormous challenge and discipline required to make it in the music world,” says AAF President Van Armenian.

A great example is of this Anna. When Van Armenian met young Anna in a small town in Javaghk three years ago, he selected her to become an AAF Fellow. The AAF funds her voice lessons in Yerevan (she comes down to Yerevan regularly for extended stays), as well as English lessons with a teacher in her town. After only a few months, she won a competition in Georgia giving her the possibility to participate in the final round in Italy. The AAF took her to Italy where she competed with candidates 5 to 7 years older than her. Anna was one of 4 candidates selected by an international jury and Nino Lezhava, Director of the Academy Tebaldi Del Monaco, to receive the Special Prize: A full scholarship to participate in a 2-week masterclass in Italy, room & board included! In Van Armenian’s words, “This is a talent to watch, mark our words! The AAF believes that talents such as Anna will be future ambassadors of Armenia, but important support is needed to continue this work.”

Another amazing talent, also from Javaghk, is pianist Anahit. She is the recipient of a 2018 AAF fellowship and recently the proud owner of a baby grand piano funded by the AAF so that she can practise on a decent piano. The AAF considers Anahit as a major talent worth the full support of her community. She practices many, many hours a day and participates in masterclasses in Paris. In fact she is also supported by international Georgian pianist Elisso Bolkvadze’s charitable music foundation, Lyra, with the mission of inspiring and promoting the young generation of Georgian classical pianists. 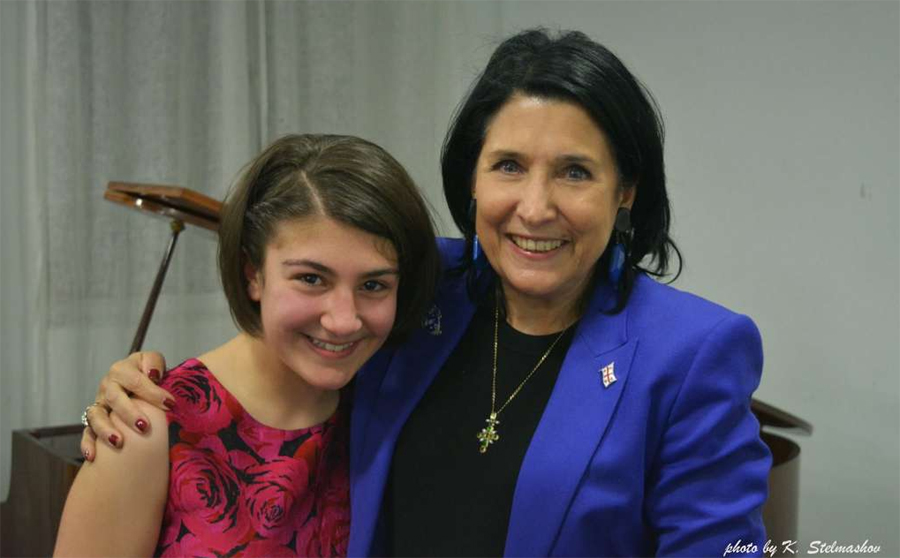 Recently, Anahit performed for none other than the President of Georgia (Salome Zourabichvili) and the Georgian Catholicos! She recently appeared on the popular Armenian TV show Մեծ փոքրիկներ where she charmed a nation with her incredible skill coupled with her captivating charm.

Other top talents the AAF supports include flutist Mariam from Gyumri. This 16-year-old has won all the national competitions and has a bright musical career ahead of her. The Atken Armenian Foundation provides her with a great instrument (donated by Simon Channing – Head of Woodwinds at the Famous Royal College of Music in London). 100% of Mariam’s weekly private flute lessons with Armenian National Philharmonic Orchestra principal flute Narek Avagyan, including travel costs, are covered by the Atken Armenian Foundation. Last summer she was invited, with a full fellowship, to the Yuri Bashmet Academy in Samara, Russia, where she benefited from two intense weeks of masterclasses and performance opportunities. A good friend and supporter of the Foundation, associate-principal flute of the Montreal Symphony Orchestra, Albert Brouwer, is convinced that “this investment in brilliant talent is truly worthwhile.”

“The new reality in Armenia, with the beautiful velvet revolution and a fresh sense of hope and determination it has brought, has opened many possibilities,” says, AAF President, Van Armenian. “When before we made it a point to stay clear of corrupt government appointees—we simply had no time to deal with the bureaucracy and disinterest—well, today, there is an opportunity to maximize government cooperation with the AAF. Some of our programs and philosophies in the regions can indeed become templates for rebuilding the damaged musical institutions and human resources in the regions of Armenia.”

When asked how we can contribute to the cause, Van Armenian simply states: “Come and show your solidarity with two of the top Armenian opera singers in the world this June in Montreal or Toronto. As the Armenian saying goes, with one stone, two birds. . . well in this case three birds. You see, with your ticket purchase or sponsorship pledge, you will hear an absolutely amazing concert, provide direct support to a young talented musician in Armenia, and finally, help build a better Armenia, an Armenia defined by a high level of cultural development.”

“I SING FOR ARMENIA”

A CONCERT OF FAVORITE ARIAS & SONGS FROM ARMENIA AND BEYOND

OR EMAIL TICKET REQUEST TO

UNDER THE AUSPICES OF THE EMBASSY OF THE REPUBLIC OF ARMENIA TO CANADA.

THE ATKEN ARMENIAN FOUNDATION IS A REGISTERED CANADIAN CHARITY AND ISSUES TAX RECEIPTS FOR ALL DONATIONS.

CONTACT THE AAF TO BE A SPONSOR FOR THIS EVENT!

TICKETS FOR THE MONTREAL CONCERT? CALL. . . 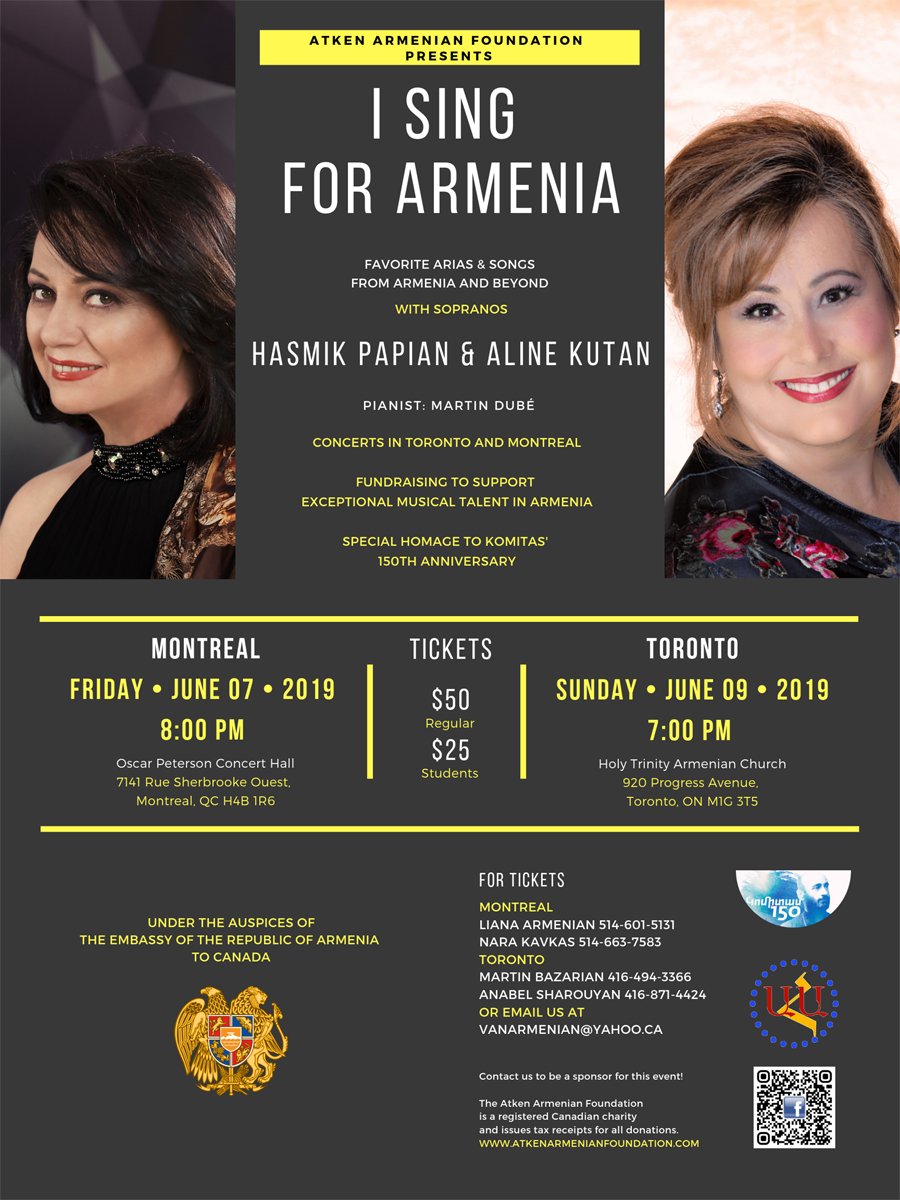