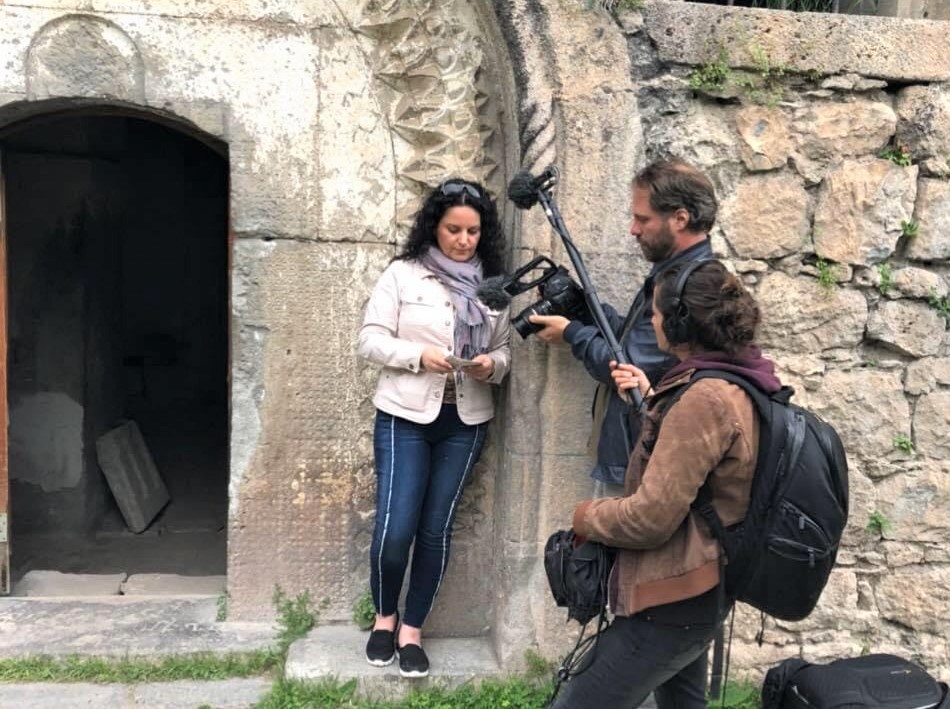 The film crew filming Anna Astvatsaturian Turcotte in her ancestral village of Khndzoresk, Armenia, May 2018.

The ten-day festival will last through June 6th online (at www.hotdocs.ca) due to the COVID-19 pandemic.

The documentary explores the Nagorno-Karabakh conflict through the eyes of various individuals, including Armenian American author and city councilmember Anna Astvatsaturian Turcotte, delving into her childhood as an Armenian refugee from Azerbaijan, her current life as a public person, a human rights advocate, activist for the people of Artsakh, author and a politician.

The film attempts to look at the Nagorno Karabakh conflict from opposing viewpoints. Its description on Hot Docs Festival’s website reads that it raises an urgent and timely question: “How does one retain a belief in universal human rights in the face of aggressive propaganda and increasing ethnic nationalism?”

In a press release Astvatsaturian Turcotte states that she does not agree with all the views of individuals featured in the film, nor does she endorse the viewpoint of the film as a whole.

She explains that the filmmaker, “as an outsider, had to work with various multifaceted components of a complicated conflict, explore the history of the region, and demonstrate conflicting sides to give the conflict and the film the respect that it deserve,” adding that she does, however, “endorse the humanity behind the film, the beauty of Armenia, of the Armenian history, Armenian people, and awe-inspiring resilience of people of independent and free Artsakh.”

To watch the film starting May 28th, follow the link below. All festival films are geo-blocked to Ontario.