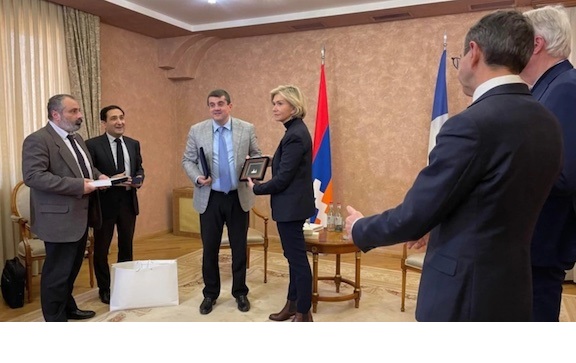 Valérie Pécresse, a leading candidate in France’s upcoming presidential race, visited Artsakh on Wednesday as part of her trip to Armenia, upsetting Azerbaijan, whose government placed her on its so-called “black list,” which includes political officials who have visited Artsakh during the past several decades.

The conservative candidate is challenging President Emmanuel Macron of France and has made the trip to Armenia presumably to ramp up support for her candidacy with the large French-Armenian voter base.

Pécresse was accompanied to Artsakh by Michel Barnier, the European Union’s chief Brexit negotiator and a former French foreign minister, and Bruno Retailleau, the leader of the conservative Les Republicains party’s bloc in the French Senate.

“In Armenia, a brotherly country for France, I come to plead for the return of peace in Nagorno-Karabakh and the strengthening of French support in the economic and cultural areas and protection of religious heritage,” Pecresse tweeted before flying back to Paris on Thursday.

Pécresse’s trip to Artsakh promoted Azerbaijan’s Foreign Ministry to summon the French charge d’affaires in Baku and present him with a protest note. In an official announcement, the foreign ministry also slammed the trip saying it was an affront to “Azerbaijan’s sovereignty and territorial integrity.”
In Yerevan on Thursday, Pécresse told reporters that Azerbaijan’s aggressive attack on Artsakh and Armenia should be viewed as a warning for all of Europe.

“I think that what happened in Armenia was an important warning for Europe, and it would be very wrong for us to underestimate its importance and think that everything that happened here doesn’t threaten us, because Europe’s history is full of lessons that threats have emerged at times when they were underestimated,” Pécresse said at a press conference.

Pécresse, who heads the Île-de-France region of Paris, met with President Armen Sarkissian, Foreign Minister Ararat Mirzoyan and other officials, with whom she discussed the 44-Day War and the post-war situation. She called on called on the Azerbaijani authorities to unconditionally release all remaining Armenian prisoners of war.

Pécresse believes that France can play a role in the settlement of the Nagorno Karabakh conflict in several arenas and cited the OSCE Minsk Group Co-Chairmanship as an example, as well as addressing the matter as part of the European Union’s agenda.

“You know that in January France will assume the presidency of the European Union, and I believe we have an important role here to convince other European countries to be more involved in solving the conflicts of the region,” Pécresse said. She also welcomed the meeting between the leaders of Armenia and Azerbaijan last week mediated by the President of the European Council Charles Michel.

This was Pécresse’s third visit to Armenia. The first was in 1990 when she worked at the French Embassy in Moscow and visited Armenia to assess the devastation caused by the 1988 earthquake. She also visited Armenia for the Francophone summit, during which she advanced cooperation between Yerevan and Île-de-France and the Tavush Province.

She recalled her visit then to the Dzidzernagapert Armenian Genocide Complex, where she planted a tree. During her most recent trip this week, she resisted the Memorial Complex, as well as the Yerablur National Military Cemetery. Pécresse and her delegation also visited the Zinvori Tun (Soldier’s Home) Rehabilitation Center where veterans of the 2020 war are being treated for their injuries.

“We attach importance to the issue of protection of Christians because we aren’t naïve, our eyes aren’t closed, and we think that today there are certain dangers threatening Armenia, but these dangers are also hanging over France and Europe,” said Pécresse, who is campaigning on preserving Christian values.