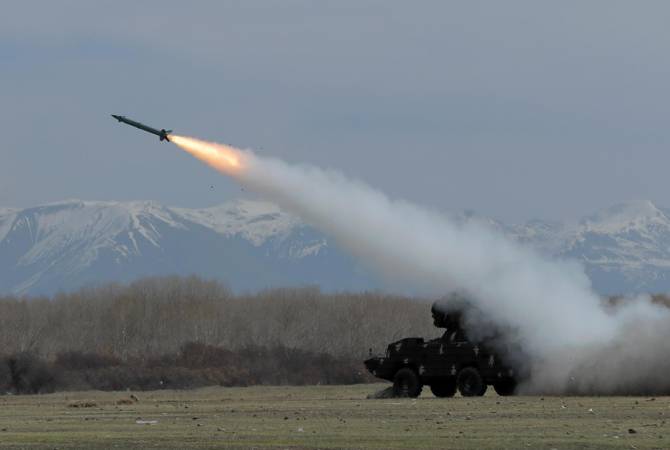 “Civilnet”- In the last twelve hours, the 2020 Nagorno-Karabakh war has continued developing.

The Defense Ministry of Armenia reported that last night there was a tense calm on the front.

However, soon after, Stepanakert, the capital of Nagorno-Karabakh, again came under intensive Azerbaijani shelling. Heavy shelling had already occurred in the evening of October 3 as well.

Later, Vahram Poghosyan, the Spokesperson of the President of Nagorno-Karabakh, announced that Artsakh’s Defense Army had destroyed the military airport in Azerbaijan’s second largest city of Ganja.

“The Ganja military airport has disappeared,” he wrote.

At around 11am on October 4, Spokeswoman of the Armenian Defense Ministry Shushan Stepanyan declared that no fire of any kind is being opened from the territory of Armenia in the direction of Azerbaijan.

Defense Minister of Armenia Davit Tonoyan reiterated Stepanayan’s remarks, adding that no long-rang fire or missile fire use is being directed at Azerbaijan from within the territory of the Republic of Armenia yet. He said however that any future strike on Azerbaijan would be disastrous for Azerbaijan.

Meanwhile Azerbaijani officials including representatives of the Azerbaijani President said that the strike on Ganja had been launched from within the territory of Armenia, this was however refuted by the Armenian side.

It is worth noting that attacks on the territory of the Republic of Armenia would mean that the Collective Security Treaty Organization (a Russian-led military bloc) would be obliged to intervene as Armenia is a member and Azerbaijan is not.

President of Nagorno-Karabakh Arayik Harutyunyan also stated that he had ordered his forces to cease all fire in the direction of Ganja. Harutyunyan had earlier stated that Armenian forces had improved their position in some key areas of the front.

The Artsakhian leader furthermore nominated five more people for Nagorno-Karabakh’s highest decoration of Hero of Artsakh for their courage in battle.

The following servicemen were nominated:

. Davit Lyova Grigoyan, who has been on the frontline in the Karakhanbeyli-Fizuli area of the front since September 27. H hit 15 tanks and one HMM unit.

. Edgar Edward Markosyan, who hit 10 tanks in the direction of the village of Talish.

. Yura Haykarami Alaverdyan, who hit nine tanks and one vehicle in the Karakhanbeyli-Fizuli area of the front.

. Davit Vank Ghazaryan, who fell on the battlefield, he led a battle sticking to the principle of no retreat. He would be decorated posthumously.