History of Armenian Genocide to be Taught in Massachusetts Schools 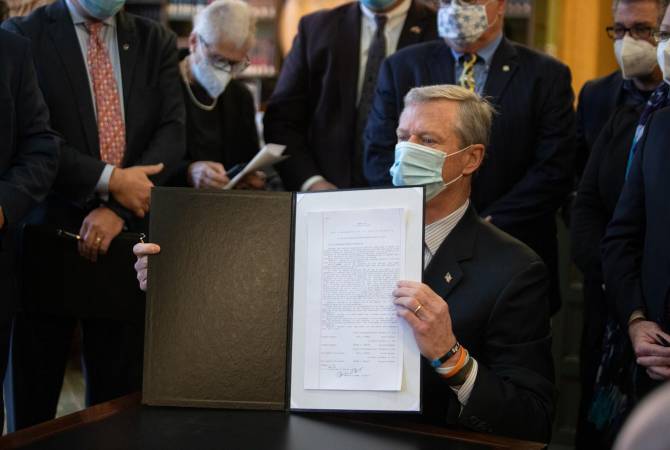 Gov. Charlie Baker signed a bill mandating public schools in Massachusetts teach students the history of some of the world’s worst atrocities, including the Holocaust and the Armenian Genocide,  December 22, 2021.

ARMENPRESS. The history of the Armenian Genocide will be taught in middle and high schools in the U.S. state of Massachusetts after legislative amendments were passed.

A group of lawmakers had presented genocide education bill No. 692 for the Massachusetts Senate and House of Representatives approval in February 2021, and it was signed into law by the Governor on December 2, 2021.

The law will take effect from the beginning of the new academic year – July 1, 2022, the Armenian Genocide Museum-Institute said in a press release.

The amendments to the compulsory education law seek “ to achieve and promote the teaching of human rights issues in all districts, with particular attention to the study of the inhumanity of genocide, including but not limited to the Holocaust, the Armenian Genocide, the Famine-Genocide in Ukraine known as Holodomor, the Pontian Greek Genocide, the forcible transport of Africans to the Americas in the slave trade in the seventeenth through nineteenth centuries, the violence committed against indigenous people in the Americas, and more recent atrocities in Bosnia, Cambodia, Rwanda, and Sudan, there shall be established and set up on the books of the commonwealth a separate fund to be known as the Genocide Education Trust Fund for the purpose of educating middle and high school students on the history of genocide.”