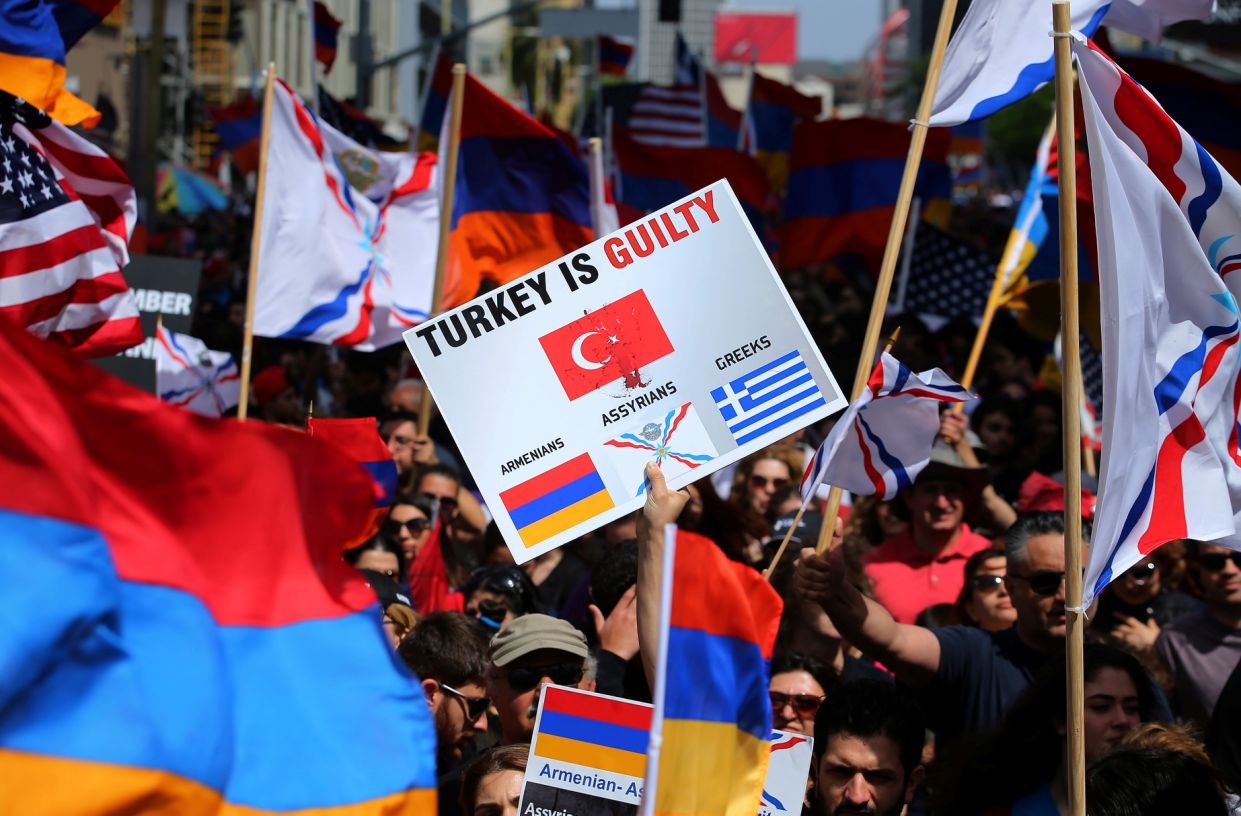 Protesters in L.A. rally in 2017 outside the Turkish Consulate in commemoration of the 102nd anniversary of the Armenian genocide. (Photo: Mike Blake/Reuters)

WASHINGTON, Yahoo News— For years a resolution condemning the slaughter of 1.5 million Armenians by Turkish nationalists during World War I has failed to gain traction in either chamber of Congress. Though lawmakers have long promised a resolution recognizing the Armenian genocide, they have been hampered by Turkey’s role as a critical ally whose significance has only increased with the rise of violent extremism across the Middle East.

As soon as next week, Democrats in the House of Representatives could ratify a measure recognizing the Armenian genocide, moving it out of committee and to the chamber floor, where it is likely to pass. The House Rules Committee is set to announce Thursday that it is going to take up the resolution next week, a final formal process before it can receive a vote.

“I’m proud that the Rules Committee will be considering this resolution next week,” that committee’s chairman, Rep. Jim McGovern, D-Mass., told Yahoo News, noting that his Worcester-area district has the oldest Armenian diaspora community in the United States. “Not acknowledging the genocide is a stain on our human rights record and sends the exact wrong message to human rights abusers around the world,” he added.

Members of the Senate have introduced a genocide-recognition resolution of their own, though its fate is less clear.

Having either one or both chambers endorse such a resolution could prove awkward for President Trump, who is fond of Turkish President Recep Tayyip Erdogan. Sensitive to Turkey’s geopolitical influence, American presidents have shied away from recognizing the Armenian genocide. The only president to do so was Ronald Reagan, in 1981. And though Congress has passed similar genocide resolutions, it has been more than two decades since it last did so.

“With the president caving in to Erdogan, it’s up to Congress to speak out for America,” Aram Hamparian, the executive director of the Armenian National Committee of America, told Yahoo News. He added that the resolution would be a “signal” to the Turks that “Washington won’t be bullied, U.S. policy can’t be hijacked and American principles are not for sale.”

Democrats and Republicans alike have framed the measure in similar terms.

The House measure would be largely symbolic but significant all the same, given Turkey’s opposition. And it would be another instance of Congress rebuking Trump on his handling of foreign policy. The president was put in a similar position over his affinity for Russian President Vladimir Putin, after both chambers imposed new sanctions on Russia in 2017 as a punishment for interfering in the 2016 presidential election. Trump groused but signed the sanctions into law.

On the Armenian front, the new push for genocide recognition does not come because of historical revelations or newfound reserves of moral courage. Consensus that the killing of Armenians by Turks constituted a genocide is universal among those who have studied it. Yet Turkey has consistently denied that a concerted ethnic cleansing took place, and it has strenuously lobbied on Capitol Hill to keep the killing of Armenians from being classified as genocide.

A genocide recognition resolution nearly made it to the House floor in 2010. Then, as now, the lead sponsor was Rep. Adam Schiff, whose Los Angeles district is home to a significant Armenian-American population. The difference, of course, is that Schiff is now one of the top congressional antagonists to Trump, while Turkey has emerged as a major point of contention between the White House and Capitol Hill.

Genocide recognition measures are usually introduced to coincide with Armenian Genocide Remembrance Day on April 24. The measure is receiving a renewed push now because Democrats want to punish Erdogan for his treatment of the country’s Kurdish minority.

Some of the Kurdish forces are based in Syria, where they were until very recently protected by U.S. military forces. Trump’s decision to withdraw those forces has led to accusations that he has “betrayed” the Kurds by leaving them effectively defenseless against the ninth most powerful military in the world.

He lifted sanctions on Turkey on Wednesday following an agreement to a ceasefire. “Let someone else fight over this long bloodstained sand,” Trump said during his announcement.

For its part, Turkey has portrayed its military incursions into Syria — which it calls Operation Peace Spring — as necessary to curbing the activities of “terrorists,” which is how it tends to portray armed Kurdish forces. State-controlled media in Turkey have described that operation in glowing, humanitarian terms.

The upper chamber of Congress could take up an Armenian genocide resolution of its own, as it enjoys the support of many Democrats and also of generally pro-Trump conservatives like Sen. Ted Cruz, R-Texas. A spokesperson for Cruz provided a statement about the need for congressional recognition of “the horrific genocide suffered by the Armenian people” but did not provide specifics about a potential Senate resolution.

That leaves the House resolution as the most immediate means of rebuking Turkey at a time when tensions with the NATO ally are at a historic high.

The White House would not say how Trump would respond to the measure, which as a standalone House resolution does not need his approval.

Democrats are making no effort to hide the fact that the measure — known as House Resolution 296 — is being introduced as a rebuke to Erdogan. In a letter to fellow members of Congress, Schiff and Rep. Gus Bilirakis, a co-chair of the Armenian caucus, wrote last week that “it weakens our standing and our moral clarity that the Congress has for too long been silent in declaring the events of 1915 as a genocide.”

Speaking on Capitol Hill earlier this week, Rep. Eliot Engel, D-N.Y., chairman of the influential Foreign Affairs Committee, said that he expected the Armenian genocide resolution to be voted on soon, along with new sanctions on Turkey. He said that he believed Turkey was “not happy” with these developments, which reflected what was in his view prevalent unhappiness on Capitol Hill with Turkey’s treatment of the Kurds.

In an unlikely development, the measure will see support from Rep. Devin Nunes, R-Calif., who as ranking member of the House Intelligence Committee is a top nemesis of Schiff and a spirited defender of Trump. Asked about how Nunes expected to vote on the issue, an aide in his congressional office forwarded a statement from 2018 in which Nunes called Erdogan’s denial of the genocide a “disgrace,” adding that it was “now more important than ever that the U.S. administration commemorate the tragic genocide of the Armenian people.”

The aide strongly suggested that nothing about the congressman’s position in the intervening months had changed.

And another staffer, this one a Democratic aide on the House Rules Committee, cautioned against tethering the resolution to ire at Erdogan, pointing to long-standing efforts by the likes of House Rules Chairman McGovern.

“A lot of people,” the staffer said, “have worked for a very long time on this.”